Hurricane "Pablo" became the sixth Atlantic hurricane on Sunday morning, October 27, 2019. It strengthened into a hurricane at 15:00 UTC at 42.8°​ north latitude, making it the strongest one to form this far north in the Atlantic and this late in the calendar since 1894. Pablo broke the record previously held by a storm that first reached farther north in 1971. Meteorologist Philip Klotzbach also confirmed that since Pablo formed at 18.3° west – it broke another record of the farthest east hurricane set by Vince in 2005, which was 18.9°​ west.

Pablo was very near the same latitude as Boston on the U.S. East Coast. According to Tomer Burg, an atmospheric science Ph.D. student at the University of Oklahoma, only one other storm since 1950 has reached hurricane intensity at a farther north latitude, and it was an unnamed hurricane in 1971 which formed at 46° north latitude.

#Pablo is now a #hurricane. It became a hurricane at 18.3°W – the farthest east an Atlantic named storm has first become a hurricane on record – breaking the old record set by Vince in 2005 (18.9°W). pic.twitter.com/f3Nwh8vXtY

NHC has upgraded #Pablo to a hurricane this morning, as it is intensifying with a ring of cooling cloud tops surrounding a relatively warm eye. pic.twitter.com/tRHzYINpwQ

According to Dr. Phil Klotzbach, a tropical scientist at Colorado State University, Pablo is also the farthest east an Atlantic storm has first become a hurricane. Pablo intensified into a hurricane at 18.3° west latitude, despite sea-surface temperatures being cooler than what is usually required for a hurricane to form. 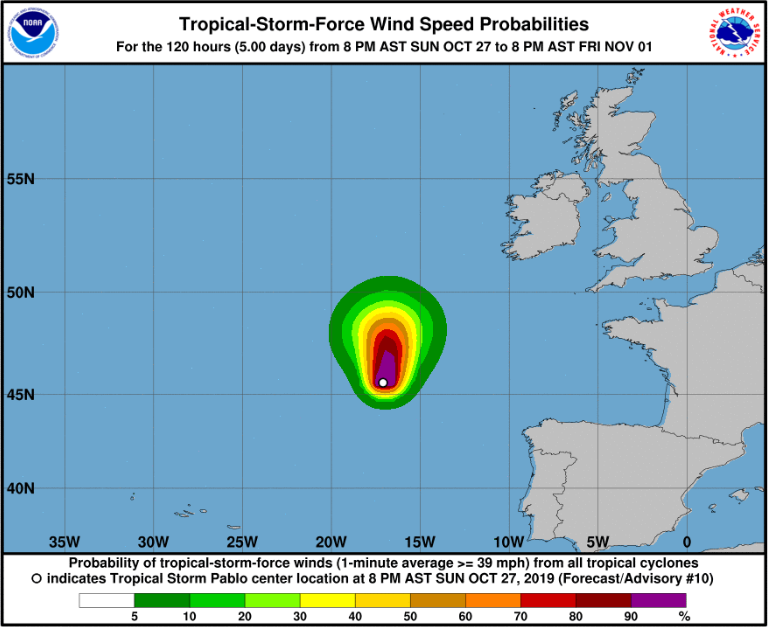 Pablo moved north at 23 km/h (14 mph) with tropical-storm-force winds extending out 97 km (60 miles) from the center. No coastal warnings are in effect.

"It is likely that cold upper-level temperatures have allowed the cyclone to maintain deep convection and lead to the formation of a warm core, while Pablo continued strengthening over cool water temperatures where tropical cyclones normally weaken. Still, the current SSTs underneath Pablo are so far below those usually needed for tropical development, that Pablo must be incredibly efficient at extracting heat from the ocean surface below (as well as the low-level surrounding air, probably)," the National Hurricane Center said.

#Pablo now has max winds of 80 mph – the strongest #hurricane this far north (44.7°N) in the Atlantic this late in the calendar year since 1894. pic.twitter.com/XyQ613jAeC