A record 41.3 million people were displaced inside their own countries at the end of 2018 due to conflict and natural disasters, according to a new report by the Internal Displacement Monitoring Centre (IDMC) of the Norwegian Refugee Council (NRC).

The number of people living in internal displacement worldwide as of the end of 2018 is the highest it has ever been, representing an increase of more than a million since the end of 2017 and two-thirds more than the global number of refugees.

"With 30.6 million internal displacements in 2017, which is the equivalent of 80 000 people displaced each day, it’s time for an honest conversation, led by affected countries and with support from the international community, on the most effective ways to turn the tide on internal displacement," said Alexandra Bilak, IDMC’s director.

She also said: "This year’s report is a sad reminder of the recurrence of displacement, and of the severity and urgency of IDPs’ needs. Many of the same factors that drove people from their homes now prevent them from returning or finding solutions in the places they have settled." 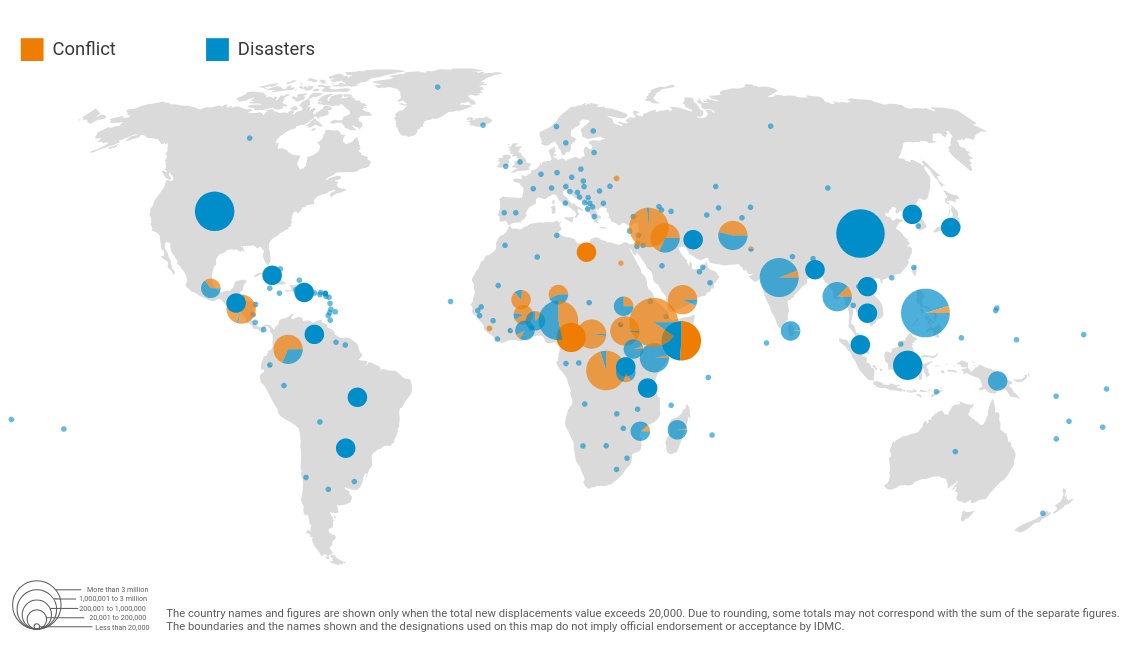 This is just a consequence of the patterned and prolonged inner displacement, IDMC recorder, in fact, 28 million new internal displacements due to general conflicts of violence and natural disasters.

One of these events was caused by the struggles between Syria and the Democratic Republic of the Congo, and the raising of an intercommunal tension between Cameroon, Ethiopia and Nigeria generated a cipher from 10.8 million people displaced by conflicts and violence. In fact, the number of IDPs who tried to return to their homes had have to deal with a lot of new issues counting damage on infrastructure, the disappearance of basic services and property destruction.

39% of new internal displacements were triggered by conflict and 61% by natural disasters.

Extreme weather events were responsible for the majority of the 17.2 million new displacements associated with disasters in 2018. Tropical cyclones and monsoon floods led to mass displacement in the Philippines, China and India, mostly in the form of evacuations. California suffered the most destructive wildfires in its history, which displaced hundreds of thousands of people. 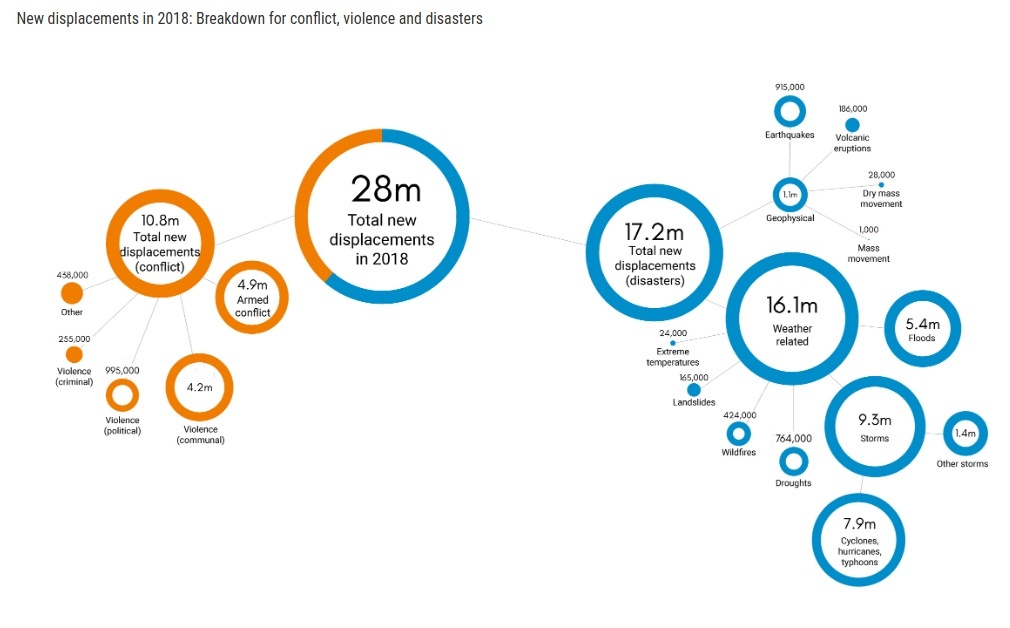 "The findings of this report are a wake-up call to world leaders. Millions of people forced to flee their homes last year are being failed by ineffective national governance and insufficient international diplomacy. Because they haven't crossed a border, they receive pitiful global attention," said Jan Egeland, Secretary General of the Norwegian Refugee Council.

"Many countries and regions are also consistently affected by disasters year after year. Instead of creating the conditions for lasting solutions to displacement, the risk of new, secondary or protracted displacement is increasing in several contexts across the globe," IDMC concluded.

"As our cities grow and the landscape of urban displacement changes, local authorities will be at the forefront of both responding to crises and reducing risk in the long-term. National responsibility and leadership and international accountability now must combine with local action."