Severe thunderstorms with damaging winds, large hail, and a couple of tornadoes will be possible across portions of the South Plains and Lower Mississippi Valley this weekend. Locally heavy rain may also produce flash flooding. Out West, strong Pacific storms will bring heavy rain, heavy mountain snow, and strong winds into next week, with localized flooding possible.

A strong cyclone across the Gulf of Alaska will produce continued active weather pattern across the Pacific Northwest, NWS forecaster Gallina said April 6, 2019.

A small but strong surface low will track quickly toward Vancouver Island later today bringing unsettled showers from coastal Northern California to Washington with some higher elevation snow in the peaks of the Cascades and into the Northern Rockies of Idaho/Western Montana.

The trailing frontal zone will then linger with very little north/southward drift through the remainder of the weekend into Monday.

Given the strength of the front, winds will bring higher moisture into southern Oregon and Northern California with the potential of 102 – 204 mm (4 – 8 inches) in the temperate rain forests of the coastal ranges, likely to increase streams potentially to bankful.

Flood watches and Advisories have been posted for much of Oregon and Idaho. 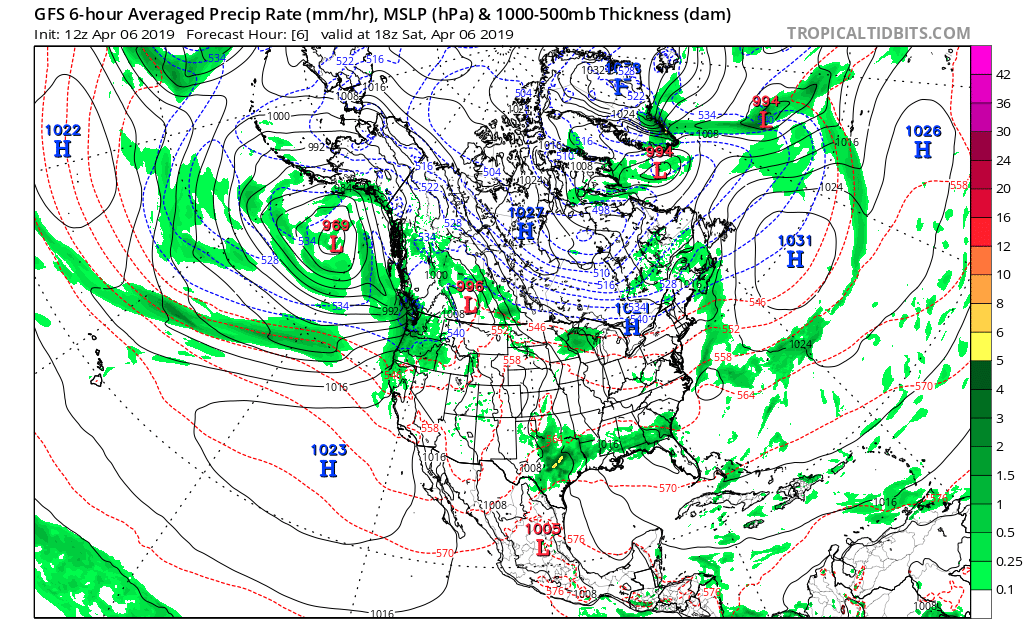 The plume of moisture will then bleed over into the higher elevations of the Sawtooth, Northern Rockies of western Montana and northwest Wyoming with the potential for producing higher elevation snows.

A weak upper level trough is emerging out of the Southern Plains into the Central Plains today, this will intersect with western Gulf moisture and draw mid-level dry air out of the Mexican Plateau.

The combination of these elements will aid the potential for thunderstorms Saturday, April 6 across Texas into the Lower Mississippi River Valley, some of which will likely be severe, with damaging winds, large hail and the potential for some tornadoes.

The trough will lift into the Ohio River Valley by Sunday, April 7 and merge with upper level energy from the strong Pacific jet stream over the Great Lakes, sparking some fast moving showers and thunderstorms in the region.

Another southern stream upper level trough will advance out of the Southern US/Northern Mexico Sunday and with the lingering moisture/instability left in place across eastern Texas into the Lower Mississippi River Valley will set off another bout of thunderstorms.

Again, there will be a threat for severe weather and given the placement of heavy rainfall over areas affected today, there is an increased threat for flooding, possibly flashy at times.

This activity will develop a surface low pressure that will continue to focus thunderstorms but will advance eastward across the Mississippi River into Monday and with it, shifting the heavy rainfall, thunderstorms into Lower Ohio and Tennessee River Valleys, and the Southern Gulf States.