The new findings indicate that the recurrence interval for large tsunamis generated in the eastern Aleutians ranges from 164 to 257 years, an important result that will inform updates to both the U.S. Geological Survey's National Seismic Hazard Map and the tsunami source models of the NOAA-led National Tsunami Hazard Mitigation Program.

These hazard products promote community preparedness and resilience to earthquake and tsunami hazards in Alaska and in all coastal areas of the United States.

Comparing new research at Driftwood Bay, in the Fox Islands, with previous research at Stardust Bay near Dutch Harbor, some 200 km (124 miles) to the east, scientists found long geologic records of earthquakes and tsunamis spanning more than a thousand years. In addition to increasing the accuracy of tsunami hazards assessments along the Alaska-Aleutian subduction zone, the findings highlight an important discovery: whether a subduction megathrust is locked or creeping today may not necessarily reflect its potential to generate large tsunamis.

These findings, published in the 'Geological Society of America Bulletin' by a team of scientists led by USGS geologist Rob Witter, present strong evidence for the occurrence of eight tsunamis in the past 2 000 years at Driftwood Bay, which faces a locked section of the Aleutian subduction zone megathrust.

A 'locked' fault is one in which its two sides are stuck in their current position and are not moving in relationship to each other. In contrast, a 'creeping' fault is one where the two sides of the fault are slowly and smoothly moving past each other, without creating earthquakes. When locked tectonic plates in a subduction zone break, the energy released can produce a giant earthquake and tsunami.

In the Fox Islands, GPS observations reveal that the megathrust behaves in both fashions: part of the fault is locked, while the adjacent section is presently creeping. Locked faults bend and contract like a steel spring, storing elastic energy that later is released whereas creeping faults exhibit slow, continuous motion along them. 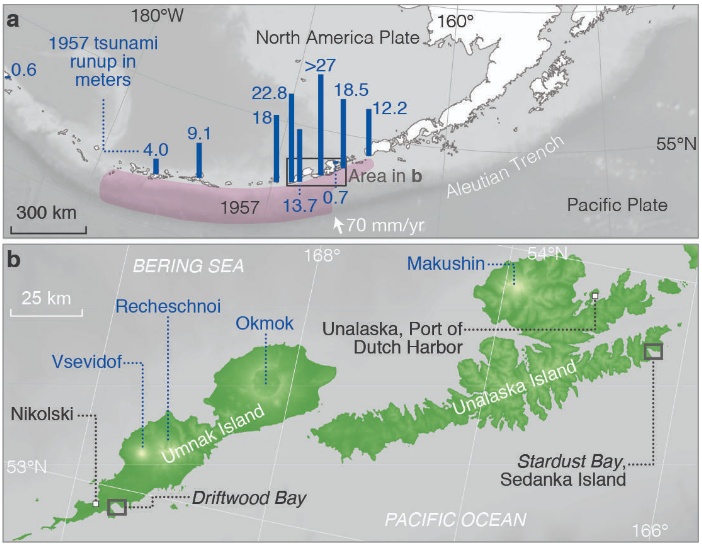 In 2012, Witter’s team visited Stardust Bay and found similar evidence for six large tsunamis in the past 1 700 years. However, unlike the new study area in Driftwood Bay, Stardust Bay faces part of the Aleutian megathrust that modern GPS observations imply is presently creeping.

Together, the observations from both sites indicate that large tsunamis generated in the eastern Aleutians occur on average every 164 to 257 years, and they occur along parts of the megathrust that are both locked and creeping.

"We can’t be certain that giant subduction earthquakes generated all the tsunamis we see in the geology of the Fox Islands," Witter said, "but because the 1957 magnitude 8.6 earthquake generated such a huge tsunami, it’s wise to be prepared for a future tsunami scenario of similar scale."

The Aleutian tsunamis generated by megathrust earthquakes in 1946 and 1957 had devastating consequences to coastal communities around the Pacific Ocean. Tsunamis are generated by seafloor deformation caused by up to tens of meters of slip on a megathrust fault; however, there are other phenomena that may cause seafloor upheaval sufficient to generate large tsunamis, such as submarine landslides and faults in the outer rise of the subducting Pacific Plate that break due to bending stresses. The 1946 Unimak Island tsunami, which occurred just northeast of the Fox Islands, is an example where a great earthquake may have triggered a submarine landslide tsunami.

"The long tsunami archive, written in the geologic record at Driftwood and Stardust bays, is in good agreement," said co-author and USGS scientist Rich Briggs, "and it tells a more complicated tale than the simple story we might tell ourselves if we rely only on modern instrumentation."

Researchers mapped the evidence of sand sheet stratigraphy, stranded drift logs that came from the beach and boulders distributed across coastal lowlands backing Driftwood Bay to address fundamental questions about seismic and tsunami hazards in the eastern Aleutian Islands.

Three distinctive tephra deposits from past volcanic eruptions served as key time-stratigraphic marker beds, which were used to correlate sand sheets. Historical evidence for inundation by the 1957 tsunami provides a modern analog for older sand sheet deposits that share similar characteristics with the 1957 deposits. Five sand sheets that record inundation at Driftwood Bay have similar ages to tsunami-deposited sand sheets documented 200 km (124 miles) to the east at Stardust Bay on Sedanka Island.