A very dangerous and life-threatening storm dubbed Medicane "Cindy" by the EMWMC and also known as Zorbas and Zorba is now fully developed and expected to hit and move over southern Greece on September 29. The storm is bringing severe to extremely severe winds and very heavy rain, potentially resulting in widespread flash flooding and wind damage.

"Medicane is perfectly visible in the Ionian sea, with the central pressure around 994 hPa and still deepening," SWE meteorologists said.

The storm should reach its peak intensity overnight and tomorrow, September 29 with central pressure as low as 979 hPa as it tracks toward southern Greece, producing major waves and severe to extremely severe winds. 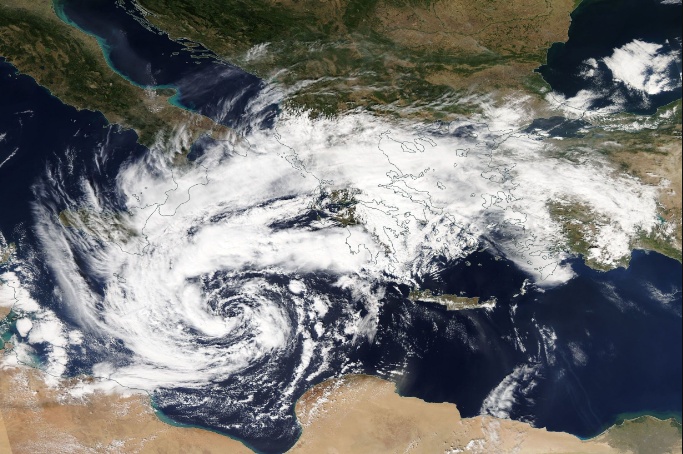 "Waves could reach 10 – 15 m (33 – 50 feet) maximum height in some areas and develop a life-threatening weather situation along the coastal areas of west and north Greece, south Peloponnese and many islands across the Cyclades," SWE warns.

The storm could dump more than 200 mm (8 inches) of rain and produce winds up to 100 km/h (62 mph) with gusts to 145 km/h (90 mph), resulting in downed trees and power lines, flash floods and severe traffic disruption.

Greek authorities have extended a severe weather warning to include greater Athens and most of southern Greece over the weekend. The island of Crete, other southern islands in the Aegean Sea and most of the southern mainland was also placed on alert, AP reports, adding that national meteorological service said weather conditions could be life-threatening.

Bad weather from a previous low-pressure has already toppled trees and caused power outages and school closures in parts of capital Athens and other parts of the country on September 28.