A major tsunami struck parts of Indonesia after powerful M7.5 earthquake hit the island of Sulawesi at 10:02 UTC (17:02 local time). The quake followed M6.1 earthquake at 07:00 UTC in which at least 1 person lost its life and 10 others were injured. Numerous moderate to strong aftershocks shook the region over the next few hours.

Tsunami waves up to 3 m (10 feet) hit the city of Palu, a growing tourist resort with a population of about 350 000 and the nearby fishing town of Donggala (population 280 000), both located some 80 km (50 miles) from the epicenter, after Indonesian authorities lifted the tsunami alert.

Sutopo Purwo Nugroho, a spokesperson of the National Disaster Mitigation Agency, said communications had been cut off in both cities, adding that officials hope to be able to gauge the scale of the damage at daybreak.

Numerous buildings have been destroyed and damaged as well as roads, bridges and other infrastructure. 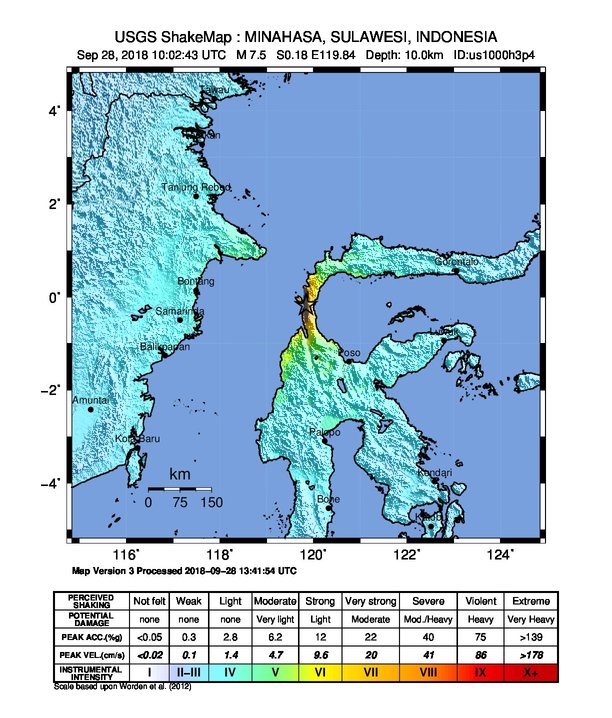 The quake occurred as a result of strike-slip faulting at shallow depths within the interior of the Molucca Sea microplate, part of the broader Sunda tectonic plate. Focal mechanism solutions for the earthquake indicate rupture occurred on either a left-lateral north-south striking fault, or along a right-lateral east-west striking fault.

While commonly plotted as points on maps, earthquakes of this size are more appropriately described as slip over a larger fault area. Strike-slip events of the size of the September 28, 2018 earthquake are typically about 120×20 km in size (length x width); modeling of this earthquake implies dimensions of ~80×30 km, predominantly down-dip and south of the hypocenter.

Shallow earthquakes of this size can often have a deadly impact on nearby communities. Historically, this region has hosted several large earthquakes, with fifteen events of M6.5 and larger within 250 km of the September 28th earthquake over the preceding century.

The largest of these was a M7.9 earthquake in January 1996, about 100 km (62 miles) to the north of today's event. The 1996 earthquake – a shallow thrust faulting earthquake likely to have occurred on the regional subduction zone system at depth beneath the shallow crust – resulted in approximately 10 fatalities, over 60 injuries, and significant building damage in the local region. 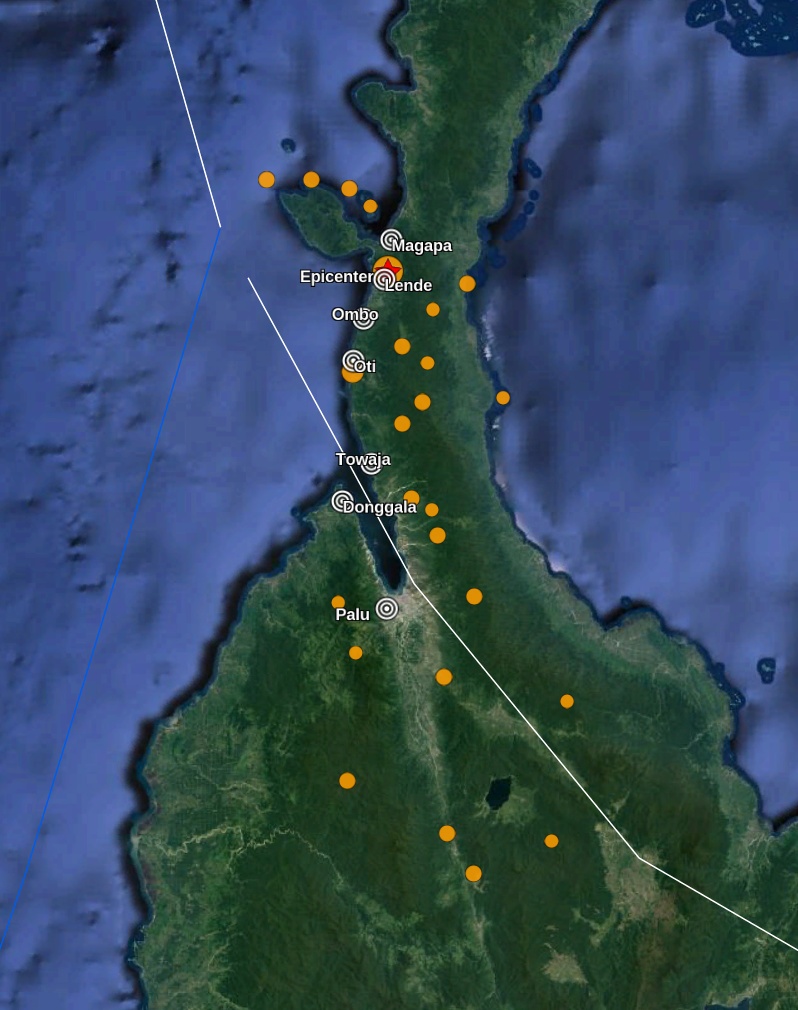 Today's M7.5 earthquake was preceded by a series of small-to-moderate sized earthquakes over the hours leading up to this event; the USGS located 4 other earthquakes of M4.9 and larger in the epicentral region, beginning with a M6.1 earthquake three hours earlier and just to the south of the M7.5 event. There has also been an active aftershock sequence, with ten events of M4.7 and larger in the three hours following this earthquake. The largest aftershock in this timeframe was M5.8, about 12 minutes after the M7.5 earthquake.

Official sources mention tsunami waves up to 3 meters (10 feet) but there are reports speaking of a tsunami as high as 6 m (20 feet).

Authorities are still assessing the damage and counting casualties. As of 22:00 UTC, September 28, at least 7 people have been killed. By 06:00 UTC on September 29, the number rose to at least 48 and authorities warned the death toll may substantially rise in the coming days.

Electricity and communications in tsunami-affected areas have been cut off, making it difficult to assess the damage.

Residents are urged not to go inside their homes and sleep away from buildings.

Indonesia's disaster agency said at least 384 people had been killed, but the number is expected to rise. At least 540 have been injured, and 29 are listed as missing.

"Many bodies were found along the shoreline because of the tsunami, but the numbers are still unknown," Sutopo Purwo Nugroho, a spokesman for the agency, told Reuters. "When the threat arose yesterday, people were still doing their activities on the beach and did not immediately run and they became victims."

"The tsunami didn't come by itself – it dragged cars, logs, houses – it hit everything on land."

The death toll has reached 830, more than 540 were injured and at least 17 000 were left homeless, authorities said Sunday, September 30.

Officials fear the death toll could reach thousands as the affected area is much bigger than initially thought.

The scale of destruction in Palu is still unclear. Electricity and telecommunications have been cut off and roads are either severely damaged or blocked by landslides.

Head of International Red Cross in Indonesia said help is also on the way to two fishing towns of Donggala and Mamuju, both feared to be heavily devastated.

With Palu airport damaged and closed, relief workers have to make their way there by road. Sulawesi is one of the biggest islands in the world and the drive from the nearest airport is around 10-12 hours.

The number of people known to have died in earthquake and tsunami has risen to more than 1 200, officials said October 2.

The number is still expected to grow. Thousands more are feared dead after mudslides hits towns and villages far away from the coast.

The number of people killed in shallow M7.5 earthquake and tsunami it caused on September 28 climbed to 1 407 today.

An estimated 66 000 homes have been destroyed or damaged, thousands injured and thousands more feared dead after landslides hit inland areas.

Rescue efforts have been hampered by lack of heavy machinery and destroyed transport links, making food, water, fuel and medicine slow to reach the hardest-hit areas.