Invest 90E formed in eastern North Pacific and NWS National Hurricane Center in Miami, Florida gives it high, 70% chance of becoming a tropical cyclone over the next 48 hours. If this comes true, the storm will form almost exactly one year after record early eastern Pacific tropical storm Adrian. The eastern Pacific hurricane season runs from May 15 through November 30.

In a Special Tropical Weather Outlook issued 07:15 UTC on Wednesday, May 9, 2018, NWS NHC office in Miami said that satellite images indicate that showers and thunderstorms associated with Invest 90E, a broad area of low pressure located more than 1 600 km (1 000 miles) SW of the southern tip of the Baja California peninsula, have become a little better organized.

Although recent satellite-derived surface wind data indicate winds of 48 – 56 km/h (30 to 35 mph) were occurring on the northwest side of the disturbance, the low-level circulation remains elongated. However, only a slight increase in the amount and organization of the thunderstorm activity or an improvement in the surface wind field would result in the formation of a tropical depression later today while the system moves northwestward at around 16 km/h (10 mph), the office said. By late Thursday, upper-level winds are expected to become unfavorable for tropical cyclone formation.

"A persistent broad and elongated area of low pressure is analyzed as a 1010 hPa surface low about 1 100 miles southwest of the southern tip of the Baja California Peninsula," NHC's Martin Nelson noted.

"Environmental conditions are very favorable for this convection to organize into bands today leading to tropical cyclone formation. The system is forecast to continue northwestward into an area of increasing unfavorable shear on Thursday. A blend of global guidance results in a solution of a surface low, or tropical cyclone, near 12.5N125W tonight accompanied by minimal gale force winds mainly over the north semicircle. The low, or tropical cyclone, is forecast near 14N126W on Thursday night with the winds then diminishing to near gale force within 75 nm over north semicircle." 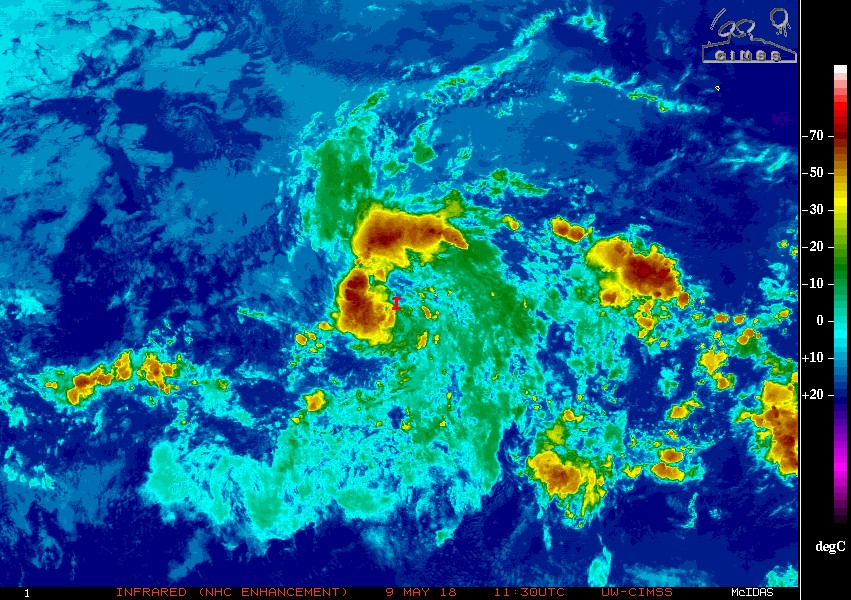 Exactly one year ago, on May 9, 2017, eastern Pacific produced its earliest named tropical storm on record – Adrian, following a pronounced trend of early tropical storm formations observed in the basin since 2000.