At the time, Adrian's maximum sustained winds were near 65 km/h (40 mph) with higher gusts. Additional strengthening is expected during the next 48 hours, and Adrian is expected be near hurricane strength by late Thursday / early Friday, May 12. 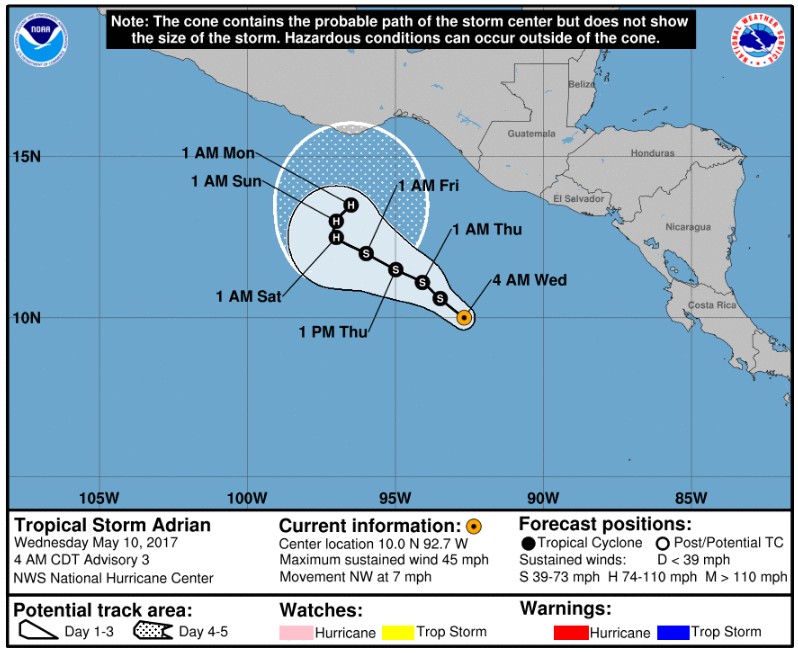 Adrian is moving slowly west-northwestward along the southern periphery of a deep-layer ridge located over the central and southwestern Gulf of Mexico. The global and regional models are fair agreement on this ridge pattern remaining basically static for the next 48-72 hours, so little change in the west-northwestward motion of the tropical storm is expected during that time.

By 72 hours and beyond, the ridge to the north of Adrian is forecast to gradually weaken and eventually break down by 120 hours as the large-scale, high-amplitude flow pattern across the United States weakens and shifts eastward. This pattern change is expected to result in weak southwesterly steering flow developing, causing the cyclone to slow down significantly and turn northeastward.

By 96-120 hours, increasing southerly to southwesterly vertical wind shear could disrupt the intensification process, but Adrian is expected to already be a hurricane by that time.

"It is interesting to note that the GFS is basically the only dynamical model that significantly intensifies Adrian. Both the HWRF and the ECMWF do not," NHC said at 09:00 UTC today. "In fact, the latest ECMWF weakens the cyclone to a broad area of low pressure within the next 5 days. Based on continuity, the fact that Adrian is moving over warm waters and the shear is low, gradual strengthening is still forecast."

The cyclone will most likely begin to meander well south of Mexico in 3 days.