Large swaths of the United States and Canada are experiencing a prolonged period of extremely cold Arctic air and forecast models call for even colder air to arrive before the New Year's Day and into the first week of 2018. Conditions will also remain favorable for continued, intense lake-effect snow around the Great Lakes, even in some regions that are out of traditional snow belt.

While Erie, Pennsylvania is still struggling through its record-shattering snowfall and dangerously cold temperatures and wind chills continue affecting the Northern/Central Plains, Great Lakes, and Northeast, meteorologists expect more heavy snow, freezing rain and some more record-breaking lows as we head into the weekend and the first week of 2018. 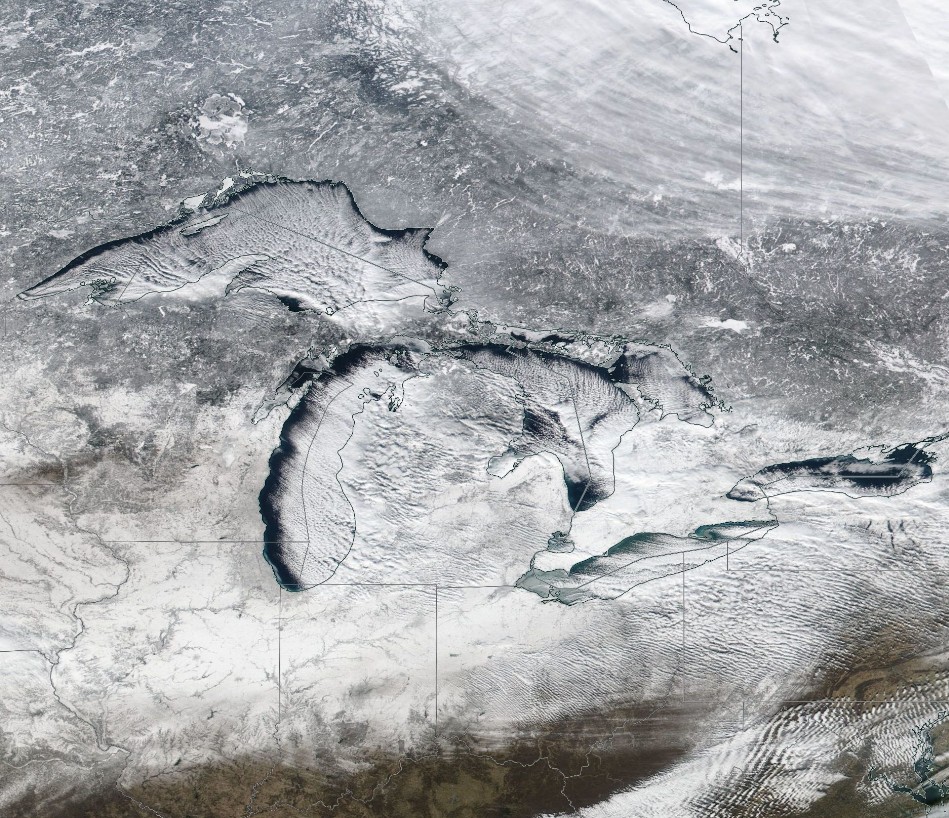 Erie hit the news this week after its all-time daily snowfall record got shattered on Monday, December 25, 2017. That day, a potent storm dumped 86.3 cm (34 inches) of snow at Erie Airport which is more than four times its previous record for December 25 – 20.5 cm (8.1 inches).

Here are some preliminary snow amounts, totals, and records from the lake effect snow event from December 24-27. We also have a webpage for the event and will be updating it with final totals and information as it becomes available. https://t.co/oPEdXo31kt #pawx pic.twitter.com/LIYi4DrAES

The waxing moon enabled this unique #VIIRS view of the #GreatLakes last night. Of note, moon glint below #lakeeffect clouds over #LakeSuperior. pic.twitter.com/Sy8cYuECZJ

With Arctic air residing over a majority of the Northeast, as well as the West Virginia spine of the Appalachians, Wind Chill Advisories and Warnings are in effect, NWS said.

A persistent wet pattern is expected over the Pacific Northwest and the Intermountain West into the weekend and beyond. An approaching low pressure system will usher in a robust plume of moisture here that will result in widespread coastal rain, a mix of rain/freezing rain at the lower elevations of Washington and Oregon and snow in the higher elevations of the Cascades and Northern Rockies. Heavy snow is expected in this regime, according to NWS. Numerous Winter Storm Warnings, Winter Weather Advisories and Winter Storm Watches are in effect from Washington to Montana.

Several waves of Arctic air will ensure frigid temperatures over the United States from the Rockies to the southern and eastern U.S. as we head into the New Year's Day and beyond as a cold high pressure settles to the east of a sharp quasi-stationary front banking up against the Rockies.

"The Polar Vortex is back and it's delivering some of the coldest air on the planet to Ontario with dangerous wind chills and another round of snow to coat the ground as we say goodbye to 2017," The Weather Network reports.

"With many cities across southern Ontario currently under extreme cold warnings, it may be disheartening to know that the coldest air has yet to arrive. In fact, it may be record-breaking cold by New Year's Eve across Ontario, including Toronto, Ottawa and Windsor as we head into New Year’s Eve and New Year's Day. If you have outdoor plans, be sure to bundle up as temperatures to start the first day of 2018 will be in the minus 20's and wind chills in the minus 30's," they added.