Volcanic summits on Hawaii's Big Island are experiencing a mix of snow and rain accompanied by gusty winds. At the same time, heavy rainfall is falling on the rest of the state, forcing authorities to issue flash and areal flood warnings, watches and advisories.

Strong easterly trade winds and a disturbance present in the region are producing heavy rain across Hawaii this week and early season snowfall on its highest peaks. In addition, meteorologists say, there is ample moisture in the area, which is helping to enhance the precipitation, especially over the Big Island and Maui where up to 852.17 mm (33.55 inches) of rain fell in 96 hours. 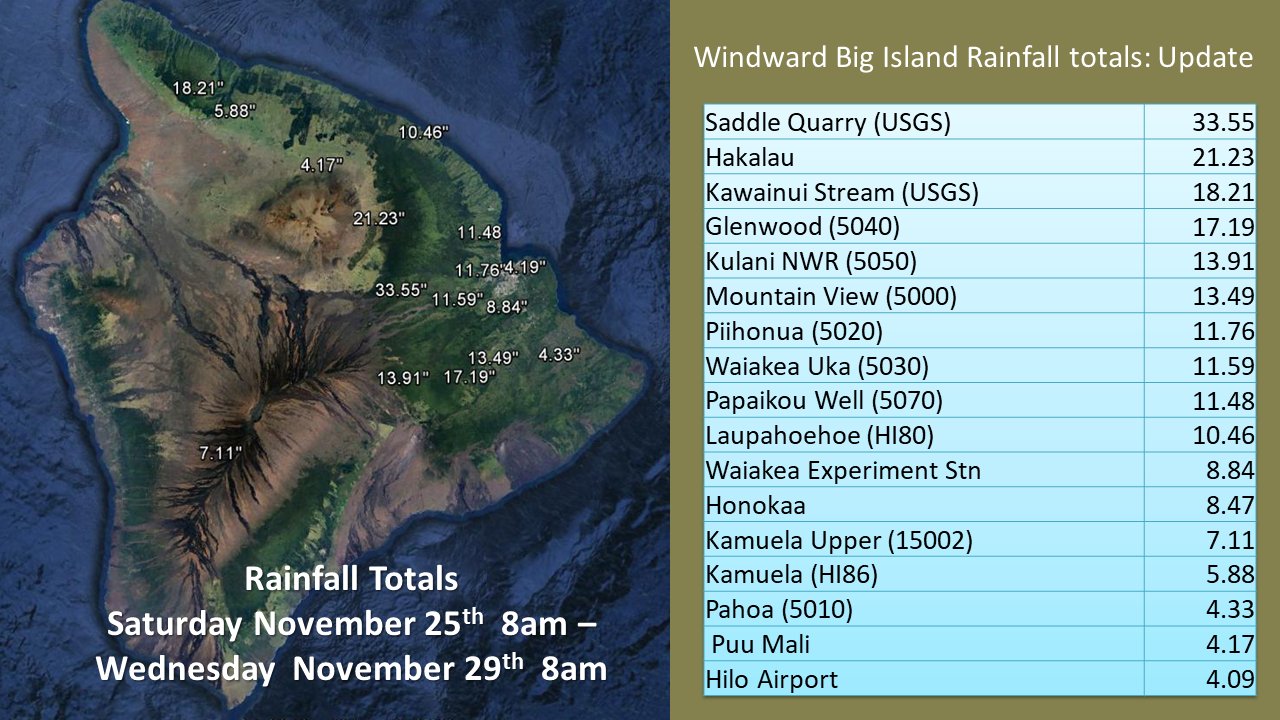 Heavy showers overnight have triggered flooding in Hanalei, Kauai and in many areas in the eastern half of the Island of Hawaii, Dan Cooke of Hawaii News Now reports.

"All islands are seeing steady showers in windward and mauka neighborhoods. Those showers are spreading leeward at times. Surf is large enough to trigger advisories along most north, west, and east shores," Cooke said.

According to the state Department of Education, Hanalei Elementary School is closed Thursday and bus service will be unavailable for Kapaa High School and Kapaa Middle School students who live in the areas from Hanalei to Haena. Kuhio Highway is also shut down near the Hanalei Bridge.

Thin snow cover was observed on the Mauna Kea Observatory late Monday into Tuesday, November 27 into 28, 2017 and snow continued on volcanic peaks through Thursday. While it may seem unusual, it's actually not rare for snow to fall on Hawaii's highest peaks, meteorologists say.

Tropical paradise is looking more like a winter wonderland this morning as #snow blankets parts of #Hawaii. The Big Island summits are experiencing whiteout conditions. Up to 1’ of snow is possible. pic.twitter.com/sTeyiPKmeA

Just an ordinary photo except the caption mentioning "…the only #snow plow in #Hawaii in action today (Tue)" on the road to Mauna Kea. (Credit: CFHT Corporation) pic.twitter.com/t3Qno889hj

The atmosphere near the Big Island will remain saturated and a bit unstable, allowing extensive fog, high humidity and ice to plague the summit for the next 2 nights, Mauna Kea Weather Center said 03:00 UTC today. There is also a possibility for isolated convection in the area and another round of snow/rain at the summit mainly through early Friday evening (local time).

While there is a chance that the low-level air mass will begin to stabilize as the inversion slowly rebuilds near 2.4 km (8 000 feet), the air mass above 4.3 km (14 000) feet will likely remain quite saturated, which could still allow for periods of fog, ice, high humidity and perhaps very light flurries/rain for Friday and Saturday night.

"This wet weather pattern is expected to continue through Friday and into Saturday, followed by rapid improvement on Sunday," Cooke said.