Around 245 BCE Ptolemy III, ruler of the Ptolemaic Kingdom in Egypt, made a decision that still puzzles many historians: After pursuing a successful military campaign against the kingdom's nemesis, the Seleucid Empire, centered mainly in present-day Syria and Iraq, Ptolemy III suddenly decided to return home. This about-face "changed everything about Near-East history," says Joseph Manning, a historian at Yale University.

Now, Manning and his colleagues have identified a possible reason for Ptolemy III's trek back to Egypt: volcanoes. It's a strange link, but one borne out by evidence. Massive eruptions, a new study suggests, can disrupt the normal flow of the Nile River by cooling the planet's atmosphere. In Ancient Times, that may have led to food shortages and heightened existing tensions in the region. The research, published Tuesday, October 17 in Nature Communications, links eruptions not just to the end of Ptolemy III's war, but to a series of violent uprisings and other upheavals that rocked Ptolemaic Egypt – an empire that extended over large portions of Northeast Africa and the Middle East.

The study creates a strong case that sudden shifts in climate can have big impacts on human society. And it's remarkable, Manning says, for doing so by drawing on a wide range of methods and evidence – from ice core records to Egyptian papyri. 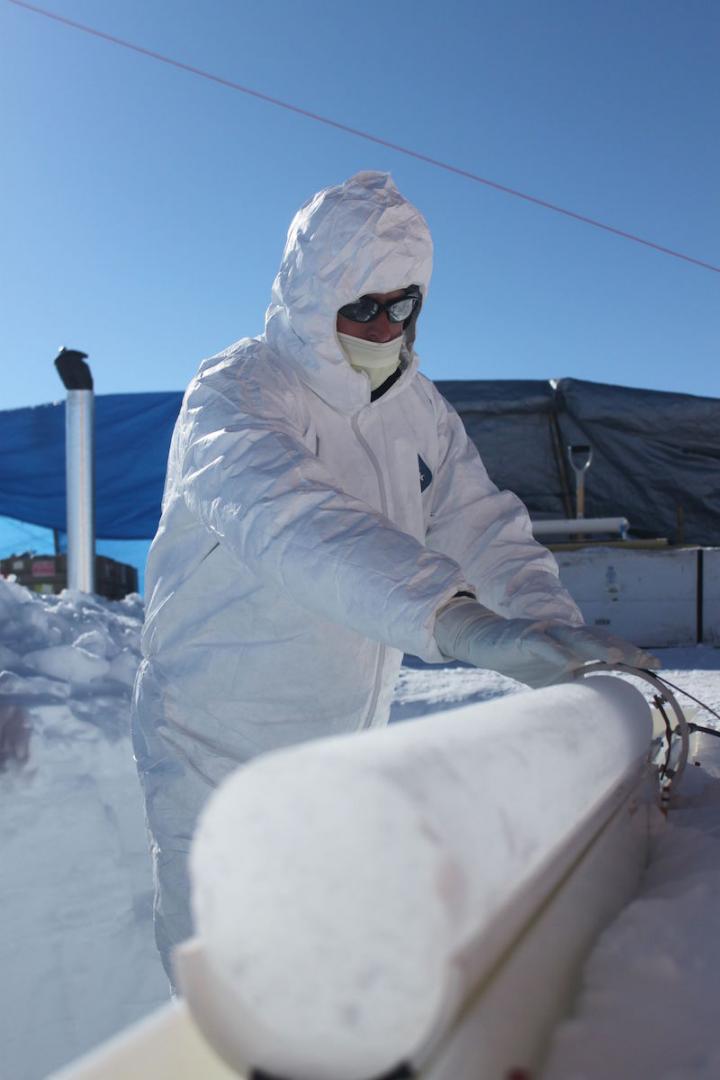 A researcher inspects an ice core collected from Greenland. These records can give scientists a precise date of when volcanic eruptions occurred around the world over the last 2500 years. Credit: M. Sigi

"That's the beauty of these climate records. For the first time, you can actually see a dynamic society in Egypt, not just a static description of a bunch of texts in chronological order," Manning says. "This is of absolutely enormous importance."

This research is a product of the Volcanic Impacts on Climate and Society working group of Past Global Changes (PAGES), a global research project of Future Earth.

At the heart of that dynamic society was the Nile River, the lifeblood of the Ptolemaic Kingdom. This empire arose in about 305 BCE, not long after the death of Alexander the Great, and ended around 30 BCE with the death of Cleopatra. During this period, Egyptian farmers depended on the yearly flooding of the Nile in July through September to irrigate their grain fields – inventing systems of channels and dams to store the river's overflow.

"When the Nile flood was good, the Nile valley was one of the most agriculturally-productive places in the Ancient World," says Francis Ludlow, a climate historian at Trinity College in Dublin and a co-author of the new study. "But the river was famously prone to a high level of variation."

In some years the Nile didn't rise high enough to flood the land, and that could lead to trouble. Historical records suggest, for example, that a shortage of grain and the unrest that followed were behind Ptolemy III's return to Egypt. And Ludlow had reason to think that volcanoes could be behind some of those bad years.

The reason comes down to a squiggly band of monsoon weather that circles the planet's equator called the intertropical convergence zone (ITCZ). Every year around summer in the northern hemisphere, this band moves up from the equator. That, in turn, soaks the headwaters of the Blue Nile River, a major tributary of the Nile. But when volcanoes erupt, they blast out sulfurous gases that, through a chain of events, cool the atmosphere. If that happens in the Northern Hemisphere, it can keep the monsoon rains from moving as far as they usually do.

"When the monsoon rains don't move far enough north, you don't have as much rain falling over Ethiopia," Ludlow says. "And that's what feeds the summer flood of the Nile in Egypt that was so critical to agriculture."

But how often would eruptions diminish the river's flooding? To find out, Ludlow, Manning and their colleagues turned to computer simulations and real-world measurements of the Nile River that date back to 622 CE. The team discovered that poor flood years on the Nile lined up over and over with a recently published timeline of major volcanic eruptions around the world. That evidence suggested that when volcanoes explode, the Nile tended to stay calm.

The team then dug further to see if that might have an impact on Egyptian society during the Ptolemaic era, which is rich in papyri and other written records. They include the trilingual Rosetta Stone. Again, the timelines matched: Volcanic eruptions preceded many major political and economic events that affected Egypt. They included Ptolemy III's exit from Syria and Iraq – just after a major eruption in 247 BCE – and the Theban revolt, a 20-year uprising by Egyptians against Greek rule. The researchers then examined how likely it was that these events occurred so close in time to eruptions, finding it "highly unlikely to have occurred by chance, such is the level of overlap," Ludlow says.

The volcanic eruptions didn't cause these upheavals on their own, both Ludlow and Manning stress. But they likely added fuel to existing economic, political and ethnic tensions. For historians, "it's like we've all been in a dark room bumping into furniture, and now we have a candle lit," Manning says.

The results may also have implications for the modern era. Currently, Ethiopia is in the middle of building a humongous dam called the Grand Ethiopian Renaissance Dam, or GERD, on the Blue Nile. Tensions are already high between the nation and Egypt over how the water resources of the river will be distributed. A sudden change in climate, such as from a volcanic eruption, could make these "fraught hydropolitics even more fraught," Ludlow says.

"The 21st century has been lacking in explosive eruptions of the kind that can severely affect monsoon patterns. But that could change at any time," he says. "The potential for this needs to be taken into account in trying to agree on how the valuable waters of the Blue Nile are going to be managed between Ethiopia, Sudan and Egypt."