A new study by the US Geological Survey and Centers for Disease Control and Prevention estimates about 2.1 million people in the United States. may be getting their drinking water from private domestic wells considered to have high concentrations of arsenic, presumed to be from natural sources.

"About 44 million people in the lower 48 states use water from domestic wells," said Joe Ayotte, a USGS hydrologist and lead author of the study. "While we’re confident our research will help well owners understand if they live in an area of higher risk for arsenic, the only way for them to be certain of what’s in their water is to have it tested."

Using a standard of 10 micrograms of arsenic per liter — the maximum contaminant level allowed for public water supplies — the researchers developed maps of the contiguous US showing locations where there are likely higher levels of arsenic in groundwater, and how many people may be using it.

Nearly all of the arsenic in the groundwater tested for this study and used to map probabilities is likely from natural sources and is presumed to be coming primarily from rocks and minerals through which the water flows.

The findings highlight the importance of private well owners working with their local and state officials to determine the best way to test and, if necessary, treat their water supplies.

"Fortunately, in most areas of the country and with appropriate safeguards, the majority of homeowners can get good quality drinking water from private wells," said Ayotte. "But this study is a good reminder that prudent, routine testing of the water, including its interaction with the water supply system, is an essential first step so homeowners and their families can confidently drink water from their faucets."

"One of our study’s basic assumptions is that the probability of high arsenic can be estimated by a statistical model.  We also assume that the domestic water use population is represented by census information used in the study," said Ayotte.

Some of the locations where it’s estimated the most people may have high-levels of arsenic in private domestic well water include: 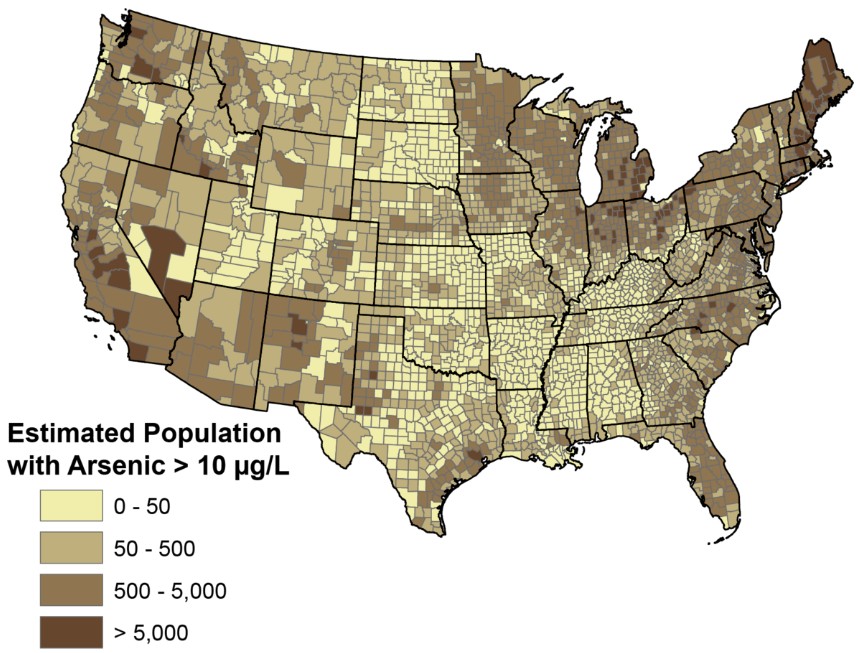 "Although high-arsenic wells can occur in all 48 contiguous states, it is more prevalent in some states than in others," said Ayotte. "The study did not include Alaska and Hawaii."

The researcher provided a cautionary note that while the study provides state and county estimates, they are not intended to take the place of more detailed or local information that may already be available in some areas.

Long-term exposure to arsenic in domestic wells may cause health-related problems, including an increased risk of cancer. Testing and, if necessary, treating the water is an effective way of reducing or eliminating the concern. A CDC fact sheet provides more information, as does the CDC’s Agency for Toxic Substances and Disease Registry.

"Ultimately, this study should be helpful not only in assessing the likelihood of people being exposed to arsenic in domestic well water, but the results of the study may assist other researchers to evaluate situations where adverse health outcomes such as cancers or adverse birth outcomes may be related to environmental factors," said Ayotte.

Public water supplies are regulated by the US EPA, but maintenance, testing, and treatment of private water supplies are the sole responsibility of the homeowner. About 44 million people in the US get their drinking water from private wells, yet surveys indicate many homeowners are unaware of some basic testing that should be done to help ensure safe drinking water in the home.