Hurricane Irma was also present in the basin as a major hurricane during the month, although it formed in late August. Both Irma and Maria reached category 5 intensity during the month of September.

Based on a 30-year climatology (1981-2010), the number of named storms forming in the basin during September was near average, but the numbers of hurricanes and major hurricanes were both well above average.

In terms of the Accumulated Cyclone Energy (ACE), which measures the combined strength and duration of tropical storms and hurricanes, September 2017 was the most active month on record, easily breaking the previous record of September 2004. Overall, this September was about 3.5 times more active than an average September from 1981-2010.

From a seasonal perspective, activity in the Atlantic basin so far in 2017 is well above average, and this season is the 3rd most active on record to date in the basin, behind 1933 and 2004. 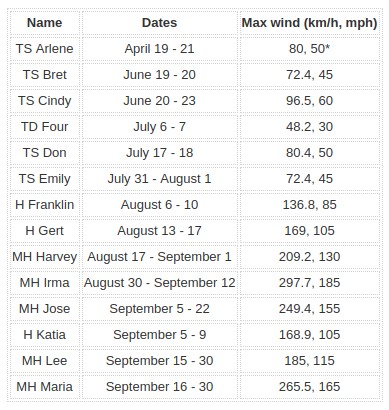 * Denotes a storm for which the post-storm analysis is complete.