This earthquake comes just 12 days after major M8.1 quake near the coast of Chiapas, Mexico and on the anniversary of the devastating 1985 M8.0 Michoacan earthquake, which caused extensive damage to Mexico City and the surrounding region. The 1985 earthquake caused between 5 000 and 45 000 deaths (found and missing). However, the most commonly cited figures are around 10 000. 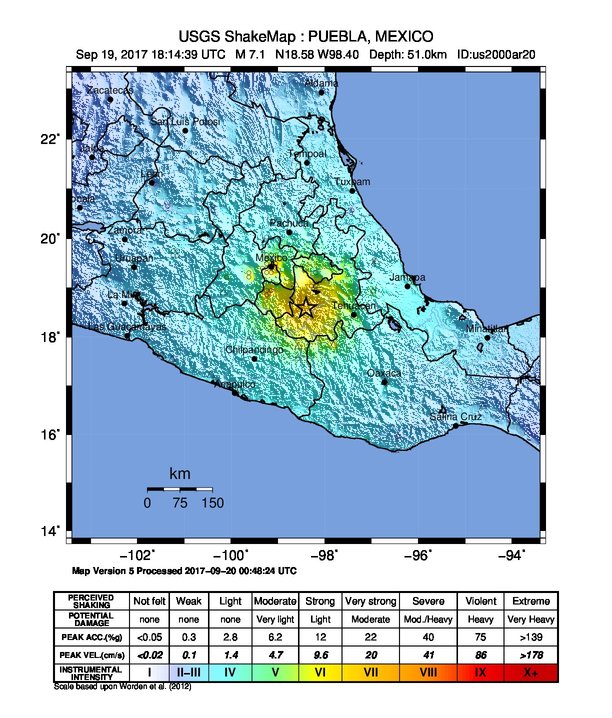 A red alert was issued for economic losses. Extensive damage is probable and the disaster is likely widespread. Estimated economic losses are less than 1% of GDP of Mexico. Past events with this alert level have required a national or international level response.

Overall, the population in this region resides in structures that are a mix of vulnerable and earthquake resistant construction. The predominant vulnerable building types are adobe block with concrete bond beam and mud wall construction. 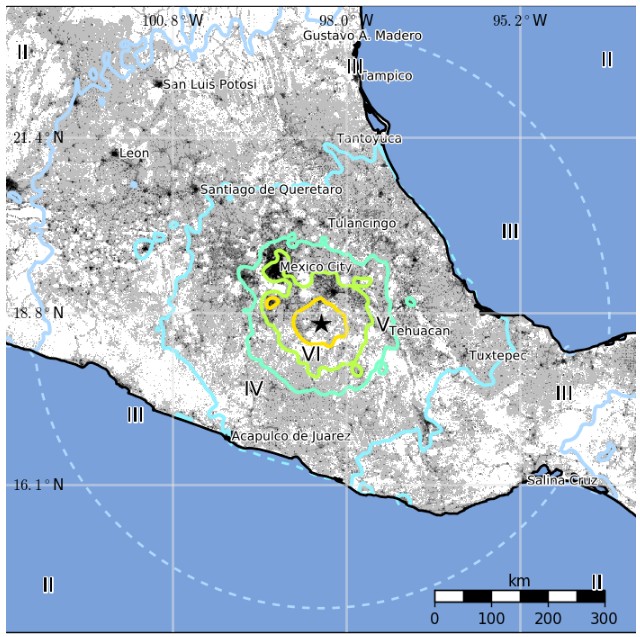 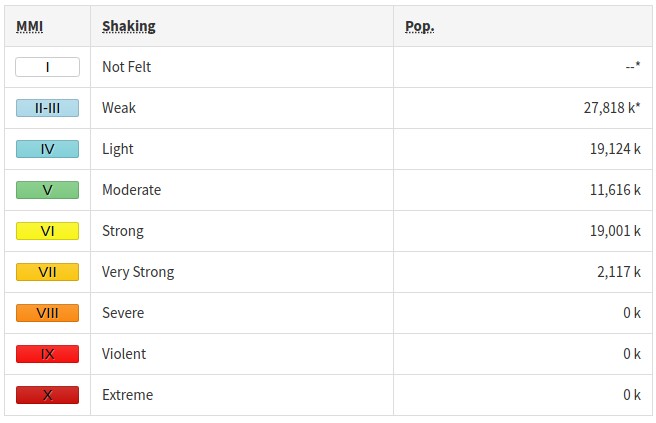 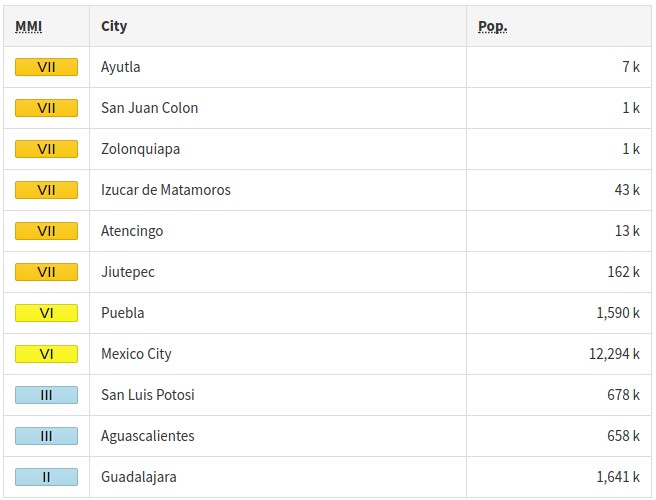 The September 19, 2017, M7.1 earthquake in Central Mexico occurred as the result of normal faulting at a depth of approximately 50 km (31 miles). Focal mechanism solutions indicate that the earthquake occurred on a moderately dipping fault, striking either to the southeast or to the northwest. The event is near, but not directly on, the plate boundary between the Cocos and North America plates in the region.

At the location of this event, the Cocos plate converges with North America at a rate of approximately 76 mm/yr, in a northeast direction. The Cocos plate begins its subduction beneath Central America at the Middle America Trench, about 300 km (186 miles) to the southwest of this earthquake. The location, depth, and normal-faulting mechanism of this earthquake indicate that it is likely an intraplate event, within the subducting Cocos slab, rather than on the shallower megathrust plate boundary interface.

While commonly plotted as points on maps, earthquakes of this size are more appropriately described as slip over a larger fault area. Normal-faulting events of the size of the September 19th, 2017 earthquake are typically about 50×20 km / 31 x 12 miles (length x width).

Over the preceding century, the region within 250 km (155 miles) of the hypocenter of the September 19th, 2017 earthquake has experienced 19 other M6.5+ earthquakes. Most occurred near the subduction zone interface at the Pacific coast, to the south of the September 19 event. The largest was a M7.6 earthquake in July 1957, in the Guerrero region, which caused between to 50 – 160 fatalities, and many more injuries. In June 1999, a M7.0 at 70 km (43 miles) depth, just to the southeast of the September 19, 2017 earthquake, caused 14 fatalities, around 200 injuries, and considerable damage in the city of Puebla (MMI VIII).

September 19 was the anniversary of the devastating 1985 M8.0 Michoacan earthquake, which caused extensive damage to Mexico City and the surrounding region. That event occurred as the result of thrust faulting on the plate interface between the Cocos and North America plates, about 450 km (280 miles) to the west of the September 19, 2017 earthquake.

Today's earthquake also occurs 12 days after a M8.1 earthquake offshore of Chiapas, in southern Mexico. The epicenter of the M8.1 event is located about 650 km (404 miles) to the southeast of today's quake. That earthquake also occurred as the result of normal faulting within the subducting Cocos Plate, at a depth of 50 – 70 km (31 – 43 miles).