The center of Tropical Storm "Cindy" crossed the coast between Cameron, Louisiana and Port Arthur, Texas between 07:00 and 08:00 UTC (02:00 and 03:00 CDT) on Thursday, June 22, 2017. Although Cindy is now weakening, it will continue to produce heavy rainfall over portions of the northern Gulf Coast and the southeastern and eastern United States, along with the potential for life-threatening flash flooding in some locations. A few tornadoes are possible through tonight from the lower Mississippi and Tennessee Valley regions to the central Gulf Coast. Cindy is the third named storm of the 2017 Atlantic hurricane season.

Flooding and power outages were reported in Louisiana early Wednesday, June 21, ahead of Cindy's landfall, when Governor John Bel Edwards declared a state of emergency for the entire state. Edwards urged all residents to take the storm seriously. “The state’s emergency preparedness and response apparatus are taking Tropical Storm Cindy seriously, and we are calling on all Louisianans throughout the state to do so as well,” Edwards said. "Please do all you can to prepare for the worst while praying for the best.”

A statewide emergency was also declared in Alabama where low-lying areas along the coast were flooded. One boy, aged 10, died on the coast after being struck by a log washed in on rough surf. Baldwin County Sheriff's Capt. Stephen Arthur says the boy was hit by the debris around midmorning Wednesday in Fort Morgan, a coastal community on a peninsula at the mouth of Mobile Bay. Stephen said witnesses reported the boy was standing outside a condominium when he was struck by the log that crashed in on a large wave. Low-lying areas along the coast were flooded.

Severe weather produced by Cindy damaged homes and vehicles in the Florida Panhandle, AFP reported. Fort Walton Beach spokeswoman Jo Soria said Wednesday that falling trees have hit houses and cars in what she called "pockets of wind damage" in two or three residential neighborhoods. The locally popular Ferry Park had a number of trees down and a concrete-block baseball dugout was destroyed. Okaloosa County Emergency Management spokesman Rob Brown said the NWS told the county the storm was a supercell. He says it was likely a tornado, but forecasters won't declare it as one until they have a ground survey team assess the area.

At 07:00 CDT (12:00 UTC) on June 22, the center of Tropical Storm "Cindy" was located about 65 km (40 miles) northwest of Lake Charles, Louisiana. Its maximum sustained winds are reaching 65 km/h (40 mph). Cindy is moving to the north at 19 km/h (12 mph) with minimum central pressure of 994 hPa. A turn toward the north-northeast is expected later today, followed by a turn toward the northeast on Friday, June 23.

Cindy is expected to weaken to a tropical depression later this morning (CDT), and become a remnant low tonight. 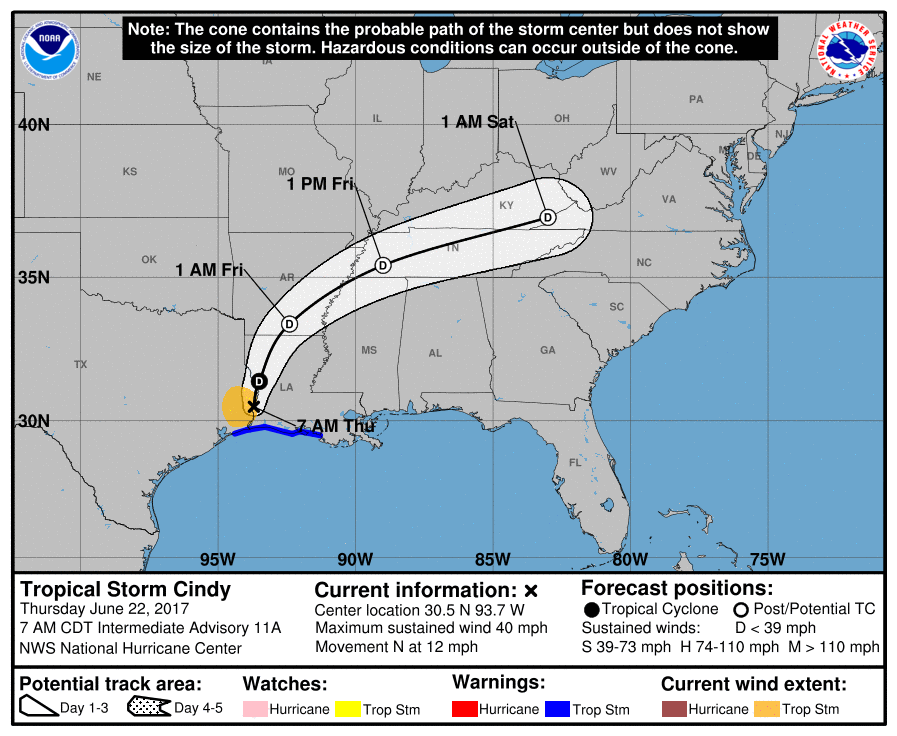 The system is expected to produce rain accumulation of 76 mm – 152 mm (3 – 6 inches) with isolated amounts up to 305 mm (12 inches) over eastern Texas, western and central Louisiana, and southern and eastern Arkansas through Friday morning.

Additional rainfall amounts of 51 – 102 mm (2 to 4 inches) with isolated maximum amounts of 203 mm (8 inches) over southern Mississippi, southern and central Alabama, and extreme western Florida Panhandle are expected through Friday morning. This rainfall could cause life-threatening flash flooding in these areas.

Rainfall is expected to begin and expand across parts of the Tennessee and Ohio valleys. Rainfall amounts of 25 – 50 mm (1 to 2 inches) with isolated maximum amounts of 102 mm (4 inches) are expected through Friday morning.

A few tornadoes are possible through tonight from the lower Mississippi and Tennessee Valley regions to the central Gulf Coast.