An unusually early tropical storm has formed in the Atlantic Ocean near Venezuela and Trinidad and Tobago at 21:00 UTC on June 19, 2017 and was named Bret. This is the earliest Atlantic MDR (Main Development Region) named storm since records began in 1851. The prior record was held by Tropical Storm "Ana" which formed on June 22, 1979. Bret is also the second named storm of the 2017 Atlantic hurricane season. It comes two months after rare, pre-season Tropical Storm "Arlene" which formed on April 20, 2017.

Bret is moving toward the west-northwest near 48 km/h (30 mph) and is expected to continue at a slightly lower speed over the next 48 hours. 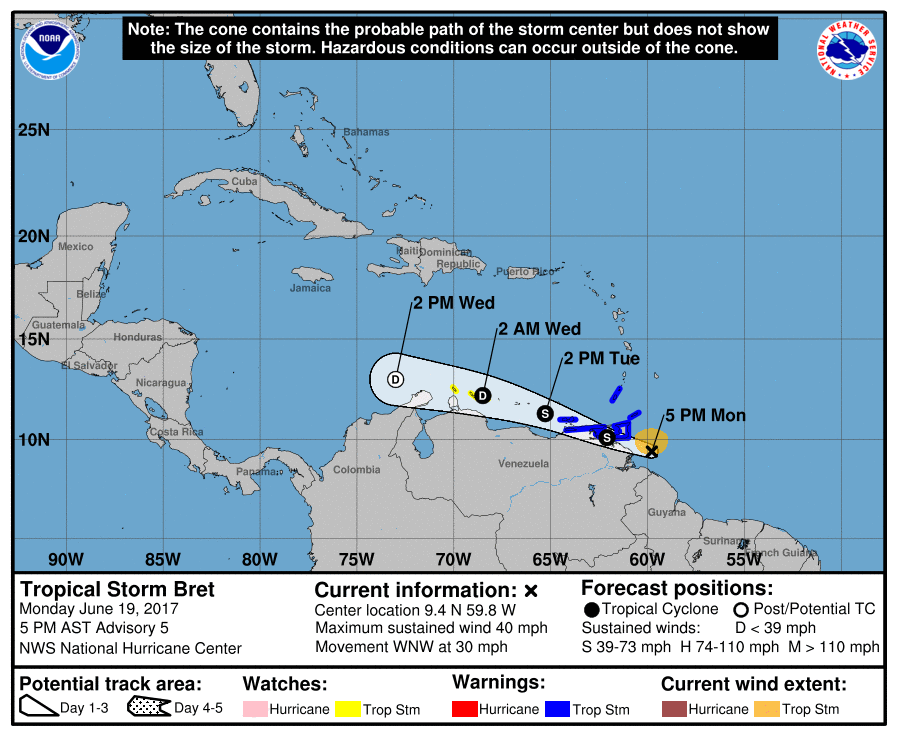 On the current forecast track, this system is expected to move near or over Trinidad and eastern coast of Venezuela tonight and early Tuesday, June 20.

Tropical-storm-force winds extend outward up to 130 km (80 miles) from the center, mainly north of the center.

Tropical storm conditions are expected to first reach portions of Trinidad and Tobago, Grenada, and Venezuela from Pedernales to Cumana including Isla de Margarita tonight (AST), making outside preparations difficult or dangerous.

Bret is expected to produce total rainfall accumulations of 50.8 – 101.6 mm (2 – 4 inches) over the Windward Islands and the eastern coast of Venezuela tonight and Tuesday.

"Tropical development in this part of the Atlantic during June is rare. Development is much more common late in the summer and typically occurs farther north," AccuWeather Hurricane Expert Dan Kottlowski said.

"On record, there have only been three tropical systems to form this far south in the central Atlantic during June," he said. These systems were the Trinidad hurricane in 1933, Tropical Storm "Ana" in 1979 and Tropical Depression Two in 2000.

Since Bret formed prior to June 22, it has become the earliest named storm to form in this part of the Atlantic since official records were kept in 1851.

Bret is also the second named storm of the 2017 Atlantic hurricane season, after rare, pre-season Tropical Storm "Arlene" which formed on April 20, 2017.

Arlene formed a month and a half before the official start of the season, following a recently noticed trend in early starts to the Atlantic hurricane season. In addition, Arlene's central pressure of 993 hPa is the lowest pressure for any April Atlantic tropical or subtropical cyclone on record.

Years 2012, 2015 and 2016 all had tropical cyclone formation before June 1. The most notable was Hurricane "Alex" which developed on January 1, 2016, and soon broke numerous records.