The National Hurricane Center (NHS) is tracking a tropical disturbance in the Gulf of Mexico which is expected to reach the US Gulf Coast late Wednesday or Wednesday night (local time), June 21, 2017, bringing between 101 to 203 mm (4 to 8 inches) of rain, with isolated maximum amounts of 254 mm (10 inches). This dangerous system is expected to further strengthen during the next day or two, and a subtropical or tropical cyclone is likely to form before it reaches the coast of Louisiana. Tropical Storm Warnings and Watches are in effect.

The system is expected to bring widespread heavy rain and flooding, gusty winds, rip currents, high surf as well as some coastal flooding.

The system is moving northwest at a speed of 13 km/h (8 mph) and this general motion is expected to continue through Wednesday, with a turn toward the north expected Wednesday night or Thursday, June 22. Its estimated minimum central pressure was 1 000 hPa.

Upper-level winds are expected to be marginally conducive for some additional development during the next 24 – 48 hours which means a subtropical or tropical cyclone is likely to form during that time (80%).

On the current forecast track, this system is expected to be near the Louisiana coast late Wednesday or Wednesday, night. 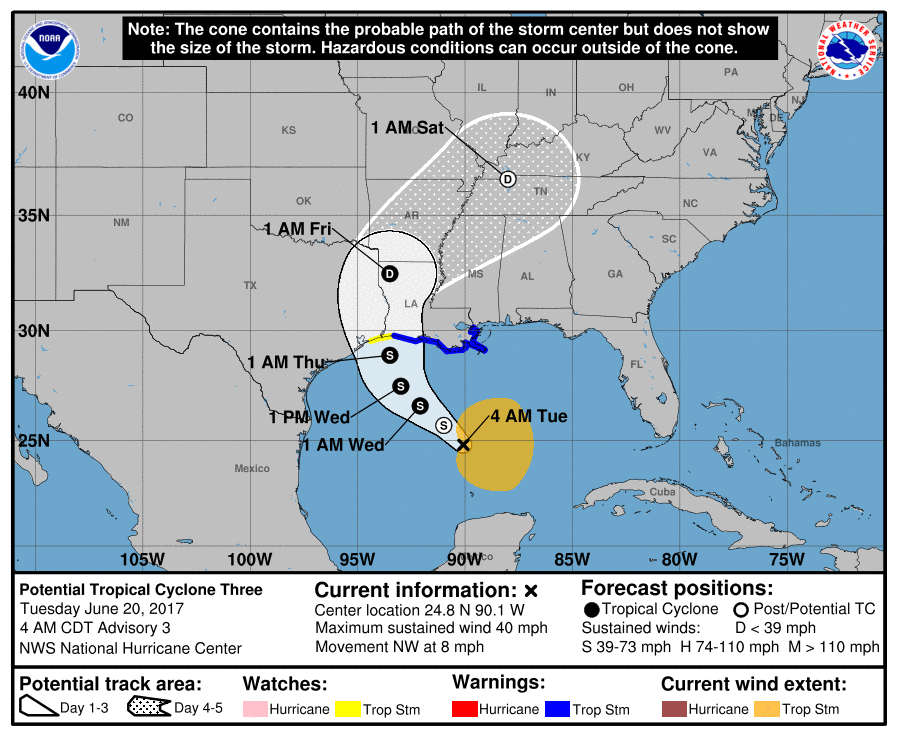 A Tropical Storm Warning is in effect for Cameron, Louisiana to Intracoastal City. Tropical storm conditions are expected to first reach this area by Tuesday afternoon (local time).

A Tropical Storm Watch is in effect for West of Cameron to High Island. Tropical storm conditions are expected to reach this area on Wednesday.

Inundations of 30 cm – 90 cm (1 to 3 feet) are possible along the coast in the Tropical Storm Warning area.

A tornado or two is possible this afternoon and tonight from south-central Louisiana to the western Florida Panhandle.

Interests elsewhere along the US Gulf Coast from the central Texas coast to the western Florida Panhandle should monitor the progress of this system, NHC said.

Potential Tropical Cyclone Three has acquired a well-defined center today and at 18:00 UTC it officially became Cindy, the third named tropical cyclone of the 2017 Atlantic hurricane season. Heavy rain produced by this system is spreading across much of the central Gulf Coast. Cindy is expected to approach the coast of southwest Louisiana late Wednesday or Wednesday night (local time), June 21, and move inland over western Louisiana and eastern Texas on Thursday, June 22, 2017.