Potential Tropical Cyclone Three has acquired a well-defined center today and at 18:00 UTC it officially became Cindy, the third named tropical cyclone of the 2017 Atlantic hurricane season. Heavy rain produced by this system is spreading across much of the central Gulf Coast. Cindy is expected to approach the coast of southwest Louisiana late Wednesday or Wednesday night (local time), June 21, and move inland over western Louisiana and eastern Texas on Thursday, June 22, 2017.

On the current forecast track, Cindy is expected to approach the coast of southwest Louisiana late Wednesday or Wednesday night (local time), June 21, and move inland over western Louisiana and eastern Texas on Thursday. 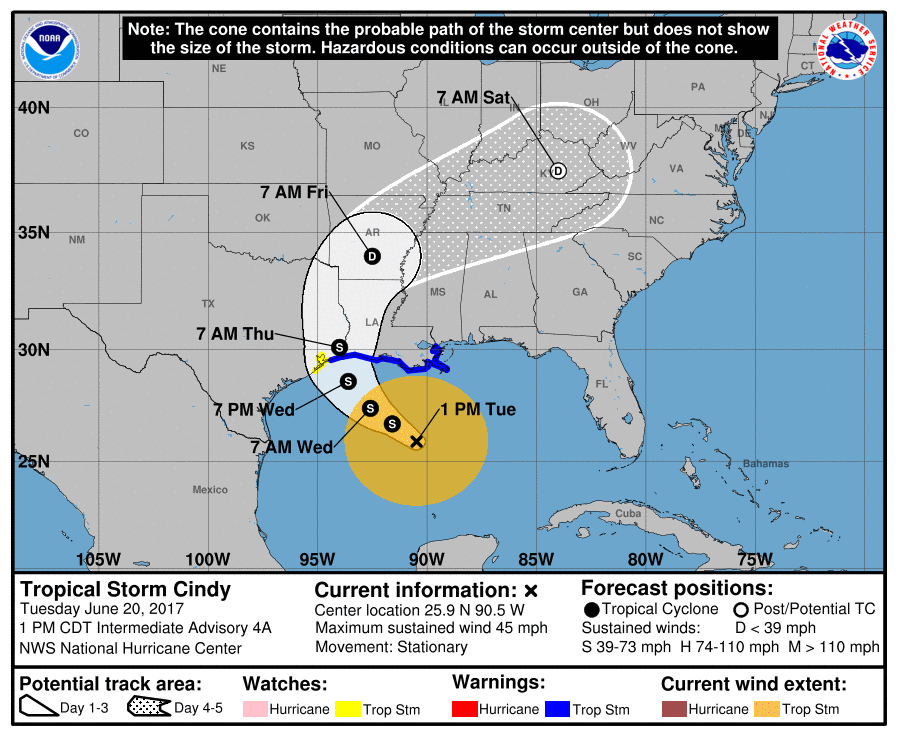 A Tropical Storm Warning is in effect for High Island to the mouth of Pearl River.

A Tropical Storm Watch is in effect for West of High Island to San Luis Pass.

Tropical Storm #Cindy has formed in the Gulf of Mexico. Rainfall is the primary hazard with maximum totals to 12" https://t.co/Iqeygf0LEO pic.twitter.com/Vm3ADLk4xj

Inundation of 30 to 90 cm (1 to 3 feet) above ground level is possible along the coast in portions of the Tropical Storm Warning area.

A tornado or two is possible this afternoon and tonight from south-central Louisiana to the western Florida Panhandle.