Tropical Storm "Arlene" formed on Thursday, April 20, 2017, as the first tropical storm of the 2017 Atlantic hurricane season. Arlene comes a month and a half before the official start of the season and follows a recently noticed trend in early starts to the Atlantic hurricane season. In addition, Arlene's current central pressure of 993 hPa is the lowest pressure for any April Atlantic tropical or subtropical cyclone on record.

The system formed on April 19 as a subtropical depression (One) and was not really expected to gain tropical characteristics before it gets absorbed by a large extratropical low on Thursday. In an interesting turn of events, it gradually strengthened and became the first named tropical storm of the 2017 Atlantic hurricane season.

As already explained, tropical storm formation over the Atlantic basin is very rare during the first four months of a year, but there has been a recently noticed trend in early starts to the season, with 2012, 2015 and 2016 all reporting tropical cyclone formation before June 1. The most notable was Hurricane "Alex" which developed on January 1, 2016, and soon broke numerous records.

At 09:00 UTC on April 21, 2017, the center of fast-moving Tropical Storm "Arlene" was located about 1 825 km (1 135 miles) WNW of the Azores. It had maximum sustained winds of 85 km/h (50 mph) and minimum central pressure of 993 hPa. This made it a tropical cyclone with the lowest pressure for any April Atlantic tropical or subtropical cyclone on record.

At the time, Arlene was moving west at 50 km/h (31 mph) and this general motion is expected to continue today. NHC expects little change in strength and Arlene is forecast to become absorbed by a large extratropical low and dissipate over the next 12 to 24 hours. 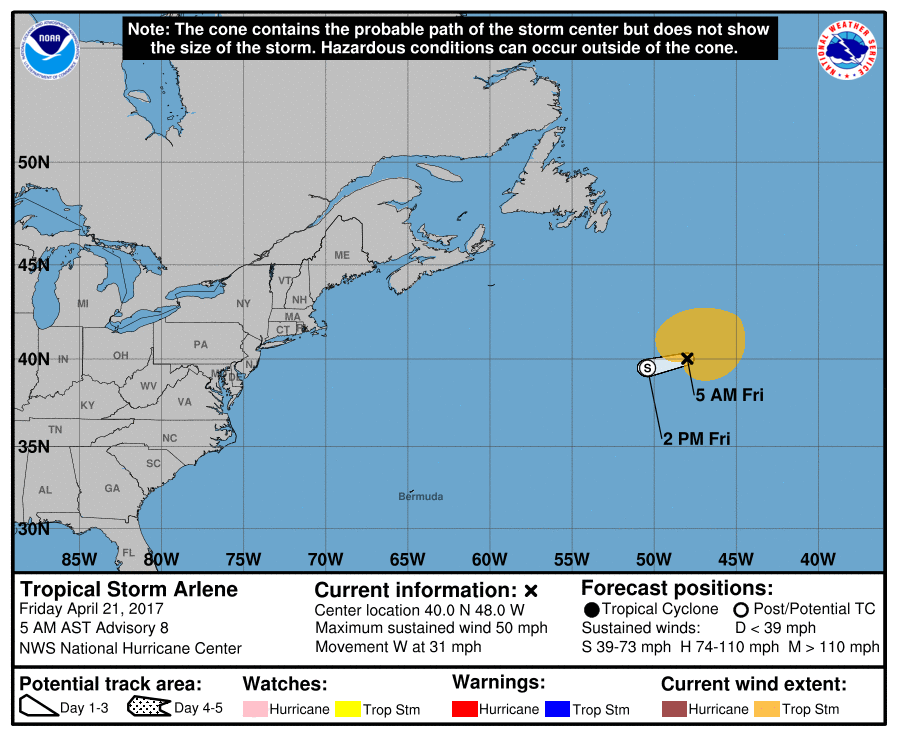 Currently, tropical-storm-force winds extend outward up to 370 km (230 miles) from the center.

Arlene is not expected to affect any land before it dissipates and is already losing it tropical characteristics as it interacts with a frontal zone and moves over cooler water.

NHC forecaster Steward said that tropical storms in April are rare and Arlene is only the second one observed in this month during the satellite era. "It should be noted, however, that this type of storm was practically impossible to detect prior to the weather satellite era," he said.

The 4 prior Aprils that had Atlantic tropical or subtropical cyclone activity averaged seasonal TC activity at near-normal levels. #arlene pic.twitter.com/Dy2iwBZ6pJ