According to data provided by the National Weather Service, nine cities in San Francisco Bay Area have set daily high temperature records on Sunday, June 18, 2017. Although temperatures remained high through Monday and meteorologists said more records might be broken by the end of the week, Sunday was the best day for that. 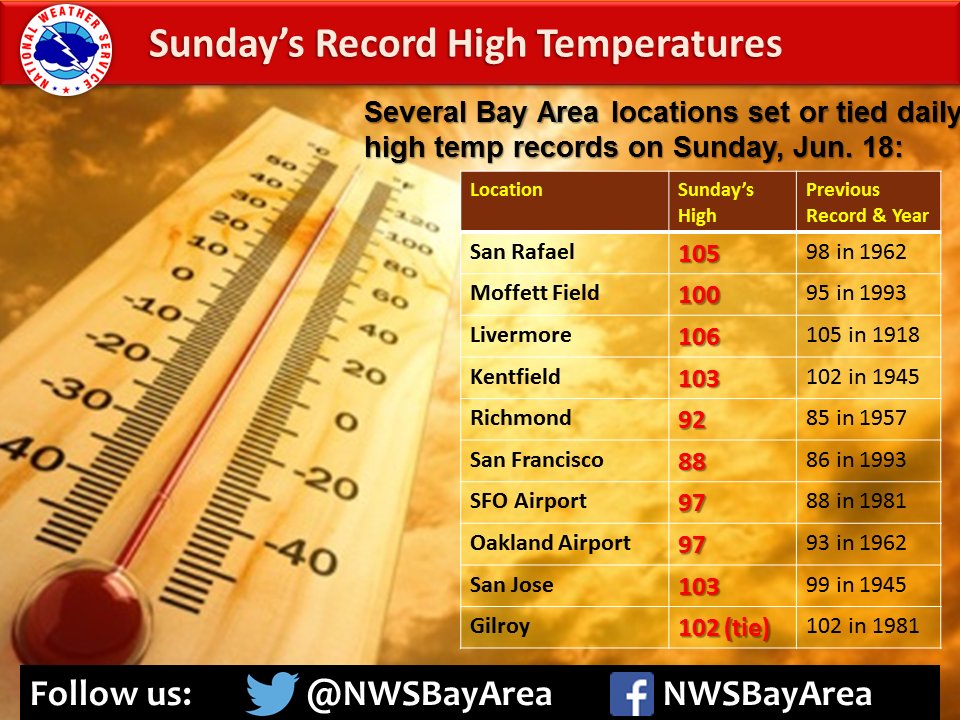 According to Pacific Gas & Electric Company, thousands of Bay Area residents lost power during the day due heat gripping the region. At one point, more than 43 000 customers were effected by the outages. By around 23:00, the number of affected households had been reduced by half.

The hardest hit areas included East San Jose and a number of cities in the East Bay including Pleasanton, Fremont, Antioch and Livermore.

Isolated showers developed in the East Bay around midnight Sunday Night, moving to the NNW. Expected to end by daybreak Monday. #cawx pic.twitter.com/BLoYcLVVlP

Wondering why the isolated #bayarea thunderstorm ⛈ tonight? It's impressive blowoff from Sierra thunderstorms making it all the way here: pic.twitter.com/VV6njG9p2E

By the end of the day, isolated thunderstorms formed around the Bay Area, bringing a little bit of moisture and instability that moved in from the south to the southeast.

NWS Meteorologist Charles Bells says the first storm cell hit Alameda County, south of Pleasanton, a little after 23:00 local time, and moved near Castro Valley before dissipating.  A stronger cell formed in southern Alameda County in unincorporated territory and swooped into Pleasanton around midnight. That storm continued onto Castro Valley around 00:30 and then Berkeley at 01:00 and headed up to San Rafael at 01:30. The cell eventually moved west of Petaluma and then fell apart.

"Now we have more stable air," Bell says. "We're not expecting any showers the rest of the week."

Bells says thunderstorms of this nature aren't common in California in the late spring, but can occur several times a year.

"Heat helps produce more energy," he said. "In Las Vegas, you have the classic example where you can have temps in the high-90s and low-100s and during the monsoon season and thunderstorms come through and you can get flash-flooding."