A G1 – Minor geomagnetic storm is in progress as of 08:14 UTC on April 4, 2017, due to Earth's proximity to the heliospheric current sheet (HCS) and weak influences of the southern polar, negative coronal hole high speed stream (CH HSS).

Geomagnetic K-index of 5 (G1 – Minor geomagnetic) threshold was first reached at 08:14 UTC. Area of impact is primarily poleward of 60 degrees Geomagnetic Latitude. Under G1 conditions, weak power grid fluctuations can occur, minor impact on satellite operations is possible, and aurora may be visible at high latitudes. 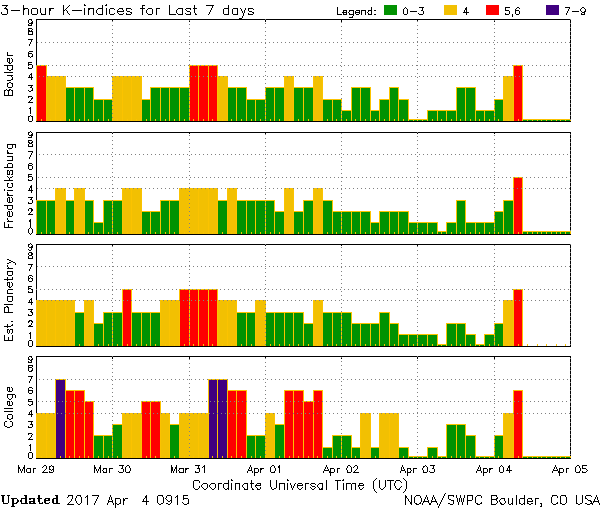 On April 3, 2017, solar winds were already indicative of proximity to the HCS and weak CH HSS influences. Total IMF strength was primarily 3 to 4 nT; with a brief strengthening to 5 to 6 nT between 04:00 and 10:00 UTC. The Bz component was in a weak north direction until about 08:00 UTC, when it reoriented into a weak, south direction. Solar wind speed trended towards a weaker state, but was primarily between 420 – 440 km/s. The phi angle was primarily negative (towards the Sun) until around 08:00 UTC, when it deflected into a positive (from the Sun) sector. It underwent variations between positive and negative sectors after 13:45 UTC. 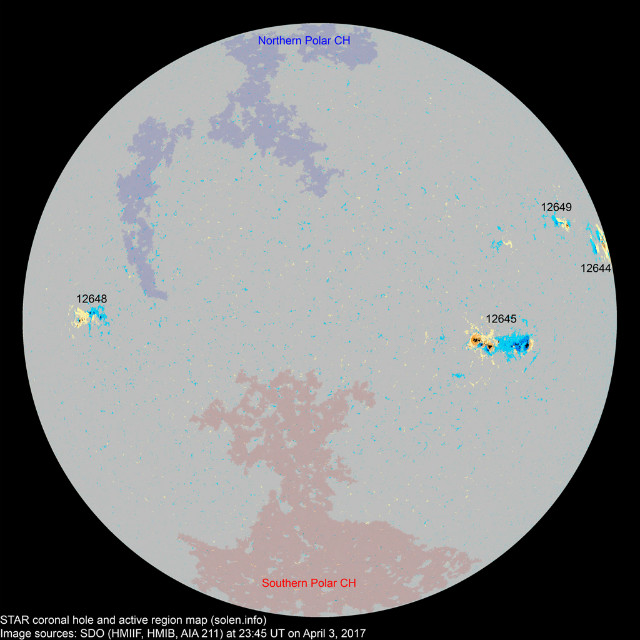 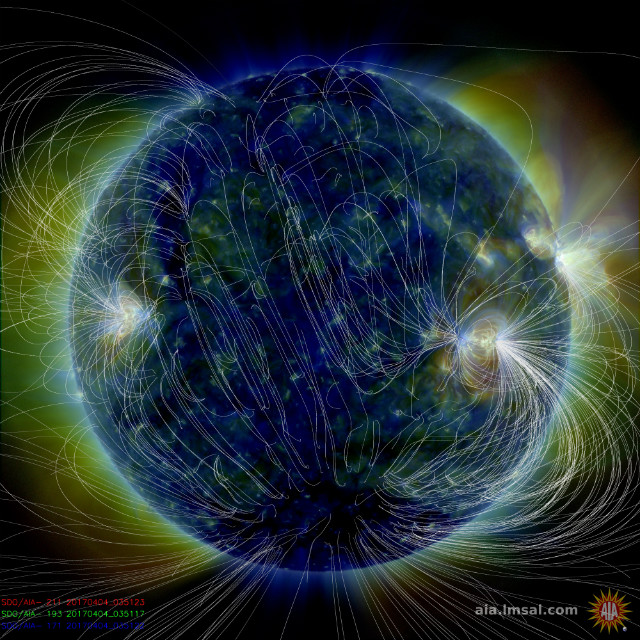 Solar wind speeds are expected to remain slightly elevated, but with a continuing overall weakening trend, over the next three days (April 4 – 6) as Earth lies in the proximity of the HCS and comes under the occasional influence of the northern flank of the negative, southern polar CH HSS. WSA-Enlil ambient model runs and recurrence data suggest this possibility.

The geomagnetic field is expected to be primarily quiet on April 4, with a few isolated periods of unsettled response on April 5 and 6 due to possible influences from Earth's proximity to the HCS and occasional southern polar CH HSS influences.