A severe storm dubbed by NIWA meteorologists as Tasman Tempest has dumped extremely heavy rain and wreaked havoc in parts of northern New Zealand over the past couple of days. Some regions already saw 100-year storms and their worst flooding in a generation.

A huge sinkhole has opened up and some 320 houses were flooded in Auckland, the biggest city in New Zealand, on Sunday, March 12, 2017, after torrential rain, including 65 mm (2.55 inches) of rain in just one hour, hit the city. 225 of the flooded houses are in West Auckland, the worst hit area.

Residents reported it took just 15 minutes for the water to completely flood their homes and turn streets into rivers. Civil Defence issued a warning to stay out of floodwaters which could be contaminated by sewage.

Local media reported that two people had to be rescued after a huge sinkhole opened up in the city, threatening the stability of a building and trapping multiple cars.

MetService meteorologist April Clark said around 80 mm (3.14 inches) fell in Auckland over a 24 hour period, but the worst of the rain seems to have taken place between 10:00 and 13:00 local time, with New Lynn and Glen Eden the worst affected. 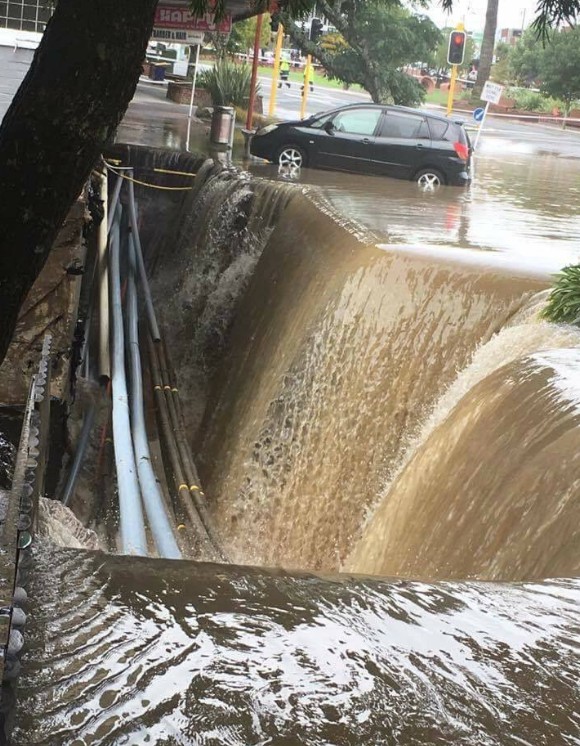 Heavy rain was accompanied by winds of more than 100 km/h (62 mph) which toppled trees and power lines.

Nearly 3 000 homes in Glen Eden lost power, according to the electricity operator Vector. The outage was caused by a flooded substation and was resolved around 17:00 NZDT.

The Fire Service responded to 582 emergency calls. At its peak, they picked up one call every 24 seconds.

Auckland is UTC +13 hours so it's already Monday morning and cleanup day for them. The weather is expected to clear up with the start of the new week.

There were no reports of casualties or injuries.