According to Dr. Dave Petley, Pro-Vice-Chancellor of Research and Innovation at the University of Sheffield, who has been collecting data on the human cost of landslides since 2002, the dataset for 2016 suggests that it was a bad year in terms of the number of landslides, but that the number of fatalities was not exceptional.

The graph below shows the cumulative total through the year of the number of landslides that caused loss of life and the number of fatalities that they caused. It does not include earthquake induced landslides. 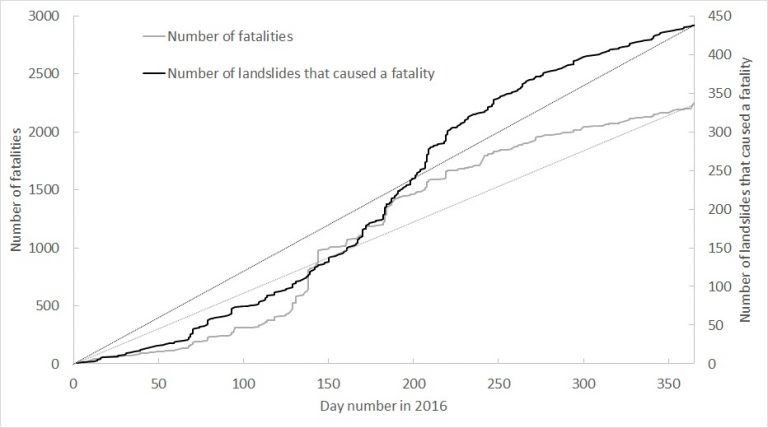 "This is the pattern that we see every year because the Asian monsoon dominates the statistics. The fatality graph is a little more unusual though, with the peak period occurring between days 120 and 150 (i.e. in May). This is earlier than in most years, and reflects a particularly active early monsoon in South Asia," Petley said.

The graph below compares the human cost of landslides in 2016 with that of 2015.

A comparison between the human cost of landslides in 2015 and 2016. Credit: Dave Petley

"The differences between the annual patterns are stark," Petley said.

"Throughout the year I recorded far more landslides that caused loss of life than in 2015. Only in the first and the last two months were the rates of events (i.e. the gradient of the lines) similar. The number of fatalities in 2016 is dominated by those events in May, which we didn’t see in 2015. However, later in the calendar year, 2015 saw very major events that caused big steps in the number of fatalities. We didn’t see these events in 2016, meaning that the curve is much smoother, and the final tally was lower."

"Of course, we now start to worry about the human cost of landslides in 2017. The first month of the year appears to be very similar to both 2015 and 2016, but as the graph above shows, January is a poor guide to what will happen," he concludes.