Persistent drought conditions in the Southeast US have caused wildfires across the states. Numerous people were forced to evacuate their homes throughout the affected regions. Kentucky and Tennessee reported the highest wildfire numbers.

According to the national drought report from November 10, 2016, 41.6 million people across 15 states are currently suffering drought conditions. Worst affected are Georgia, Alabama, Mississippi, and Tennessee while western Carolinas are strongly affected, as well.

The US Forest Service reported 59 active wildfires in the Southeast, 14 of which broke out on November 10. 20 fires that were burning in Kentucky on the date have burned down almost 20 000 acres, according to Jennifer Turner, a spokeswoman for the Kentucky's state Division of Forestry. About 390 firefighters and numerous water-dumping helicopters were deployed to aid in fighting fires. 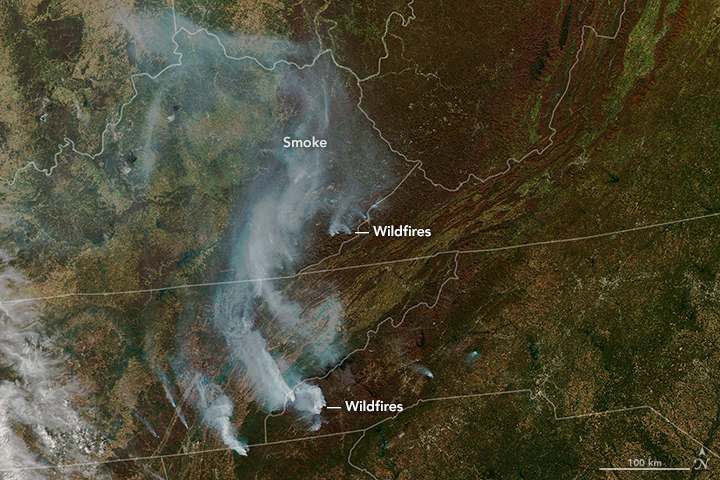 As of November 10, 1 100 fires across Alabama have burned down almost 12 000 acres. Tied or new records for days without precipitation since September have been reported in Tuscaloosa and Birmingham while Noccalula Falls region also reported dry weather over the last few weeks.

Pat McCrory, the Governor of North Carolina declared a state of emergency for the fourth county, in order to aid in evacuations and secure fire-fighting goods.

A smoky haze, related to fires in the Appalachian Trail was observed over Atlanta this week. Two arrests have so far been made in eastern Kentucky regarding arson violations while Tennessee has also put in effect arrests for arson and burning violations, according to media reports.

One of the largest fires was reported in the Cohutta Wilderness area grew over the last 24 hours, aided by the strong winds. The fire has already burned down about 10 000 acres, and about 300 people are currently fighting the blazes. 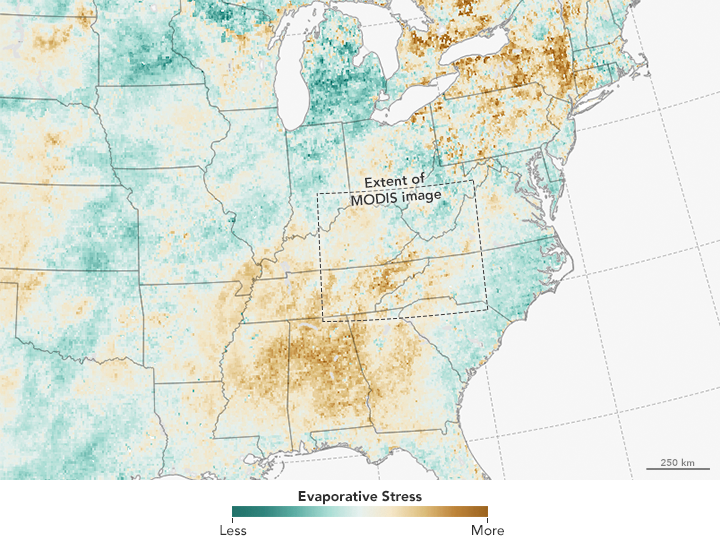 The map showing areas of intense evaporative stress between October 6 and November 6, 2016. The dataset is based on observations of land surface temperatures collected by NOAA's  geostationary satellites and on observations of leaf area index from NASA’s Terra and Aqua satellites. From the combination the gauge evapotranspiration can be estimated, providing information on how much water is evaporating from the land surface and from the leaves of plants. Image credit: NOAA/NASA/Terra/Aqua MODIS

Outdoor burning bans have been placed in effect in the drought zone. According to the Drought Monitor from the National Drought Mitigation Center, drought remains persistent across parts of the Florida panhandle, Virginia, Louisiana, Mississippi, Texas, Oklahoma, Arkansas, Indiana, and Missouri.

The severe drought conditions began in May this year and grew stronger during the summer period. The highest drought level was reported in portions of Mississippi, Alabama, Georgia, Tennesse, and North Carolina while the entire Southeast apart from the coastal regions experienced at least moderate drought conditions.