Researchers from the National Institute of Geophysics and Volcanology (INGV), the University of Naples Federico II and the National Research Council have discovered six undersea volcanic structures in the Gulf of Naples, near Mount Vesuvius in Italy.

The structures were found at a distance of less than 3 km (1.8 miles) from the coast, in the stretch between Herculaneum and Torre Annunziata.

"We have detected new carbon emission points in the Gulf of Naples, which is quite common in geothermal and volcanic areas such as Naples" says Guido Ventura, a researcher at the INGV.

"And here we have discovered six unknown volcanic structures (cones and domes), with a diameter of about 800 m (0.5 miles). In addition, we have identified the fronts of the Vesuvian lava flows that spilled into the sea mainly in the Middle Ages."3 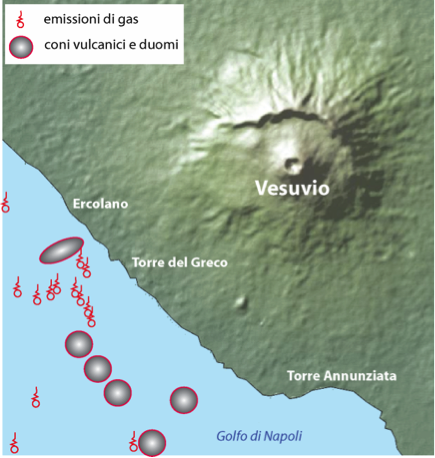 The research, conducted in 2014 aboard the research vessel 'Urania' CNR, made it possible to detect, with extreme detail, the stretch of coast in front of the Vesuvius.

"We used a variety of exploration techniques, including magnetometric, seismic and bathymetric," explains Maurizio Fedi, a professor of DISTAR, University Federico II.

These investigations form the basis for the implementation of a contract for offshore monitoring system aimed at the study of any undersea volcanic phenomena that could affect the coast.

In the past, Mount Vesuvius has had a roughly 20-year eruption cycle. Its last erruption took place on April 4, 1944 (VEI 3).

Violent explosive eruptions of Mount Vesuvius are a result of a tear in the African plate located right under the volcano. This allows heat from the Earth's mantle layer to melt the rock of the African plate, building up pressure that causes them.

Due to the large population of the city of Naples and the surrounding towns on the slopes nearby (~3 million), Mount Vesuvius is considered to be one of the most dangerous volcanoes in the world.

Vesuvius is best known for its violent eruption that started shortly after noon on August 24, 79 CE that completely destroyed the cities of Pompeii and Herculaneum. This was a massive eruption, with volcanic explosivity index of 5.

Around 06:30 on August 25, "a glowing cloud of volcanic gases and debris rolled down Vesuvius’ slopes and enveloped the city of Pompeii. Most victims died instantly as the superheated air burned their lungs and contracted their muscles, leaving the bodies in a semi-curled position to be quickly buried in ash and thus preserved in detail for hundreds of years."2​

In 62 CE, a major earthquake hit beneath the volcano and caused massive damage to Pompeii. The quakes that followed during the next 17 years, until the eruption, were so common and damaging, often lasting for several days, that the residents didn't pay much attention in early August of 79 when several quakes hit beneath the cities.

"People were unprepared for the explosion… Pliny, watching from the town of Misenum, approximately 21 km (13 miles) from Pompeii, described the massive debris cloud. 'It resembled a (Mediterranean) pine more than any other tree. Like a very high tree the cloud went high and expanded in different branches…. sometimes white, sometimes dark and stained by the sustained sand and ashes.' In Pompeii, ash blocked the sun by 1 p.m. and the people tried to clear heavy ash from rooftops as it fell at a rate of about 15 cm (6 inches) an hour.

Shortly after midnight, a wall of volcanic mud engulfed the town of Herculaneum, obliterating the town as its citizens fled toward Pompeii. About 6:30 a.m. on the following morning, a glowing cloud of volcanic gases and debris rolled down Vesuvius’ slopes and enveloped the city of Pompeii."2

Abstract of the paper

We analyzed new magnetic, bathymetric, and seismic data acquired in the offshore sector of Somma-Vesuvius volcano (Italy). We detected a group of high-intensity, short wavelength magnetic anomalies corresponding to partly buried volcanic dome-like structures located by seismic data. The magnetic anomalies are aligned along a NW-SE strike that is the preferential orientation of an eruptive fracture of the pre-19 ka activity of Vesuvius.

Three cones emplaced before the Last Glacial Maximum, whereas a fourth one emplaced after 19 ka suggesting a rejuvenation of the eruptive system offshore the volcano in historical times. We also identified a NE-SW elongated magnetic anomaly consistent with a dike-like body associated to an on-land tectonic structure that was active in recent times at Vesuvius. A delta-like area with diffuse low-intensity magnetic anomalies reflects the seaward fronts of lava flows that entered the sea mainly during the Middle Ages.1