Hundreds of tourists and residents living near Italy's Mount Vesuvius have been evacuated for the second time in a week as firefighters battle numerous separate blazes on the slopes of the volcano. The fires are believed to have been started by arsonists and are fueled by dry weather and strong winds.

The evacuations were reportedly ordered as a precautionary measure after some observers thought the cloud of smoke was made by a new eruption. It's obvious why some would think that if you compare the two images below:

Authorities are reporting that fires that started several days ago, and intensified on July 11, have devastated pine forests and hectares of woodland in the area. There are around 600 firefighters and civil protection workers on the scene.

The Italian Civil Protection Agency called the fire outbreak in the Vesuvius National Park one of the “most critical situations."

According to The Local, the fires are believed to have been started by arsonists. One hypothesis emergency services are exploring, according to Il Mattino, is that those responsible may have doused live animals, such as cats or dogs, in petrol, causing the fire to spread quickly.

"It is sad that criminals have to destroy the land in which we live and it is painful to receive daily messages from people unable to sleep,'' said Marco Ricci, a priest of a town close to Ercolano. Speaking to news agency Ansa, Ricci called on Italian president Sergio Mattarella to approve the use of the armed forces in tackling the fires. Late in June, the priest had helped organize a march in the area to protest illegal waste dumping and toxic fires close to Mount Vesuvius. 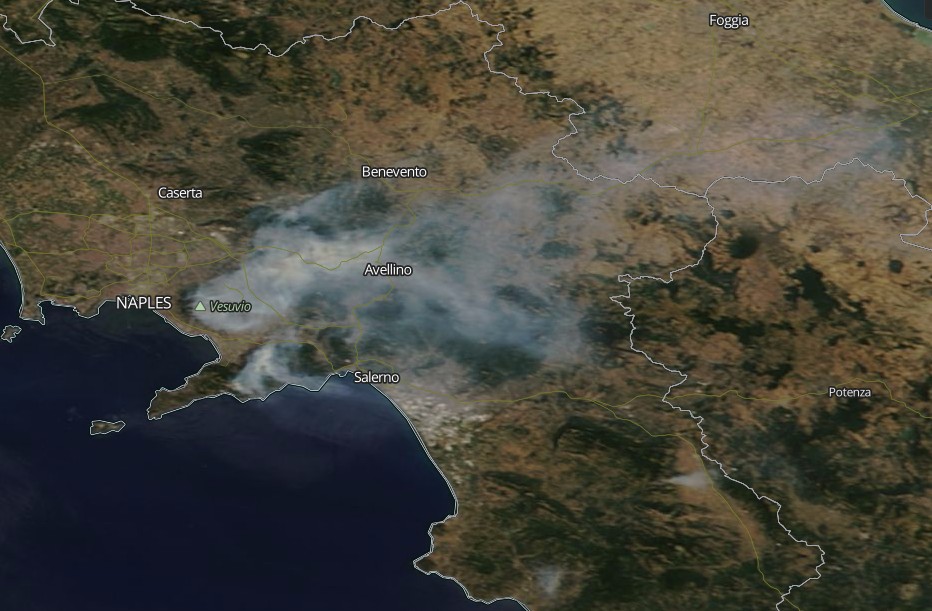 Smoke from wildfires on Mount Vesuvius as seen by NASA Terra MODIS on July 12, 2017

Italy has seen a huge number of fires, particularly wildfires, following months of lower than average rainfall and high temperatures, and the situation is most serious in the south. On Friday, there were 441 'active incidents' including 288 wildfires across the country, firefighters said.