PAGASA named this typhoon Gener and issued TCWS 1 for the Batanes Group of Islands in the Luzon Strait. Unlike Super Typhoon "Meranti," which passed right over the Philippines island of Itbayat, south of Taiwan, Malakas will track east of Taiwan and pass about 80 km (51 miles) NE of its northeastern tip.

Estimated rainfall amount is from moderate to heavy within the 400 km (248 miles) diameter of the typhoon.

Currently, Tropical Cyclone Warning Signal 1 is in effect for the Batanes Group of Islands in the Luzon Strait. Wave height at open sea is between 1.2 and 4 m (4 to 13 feet). 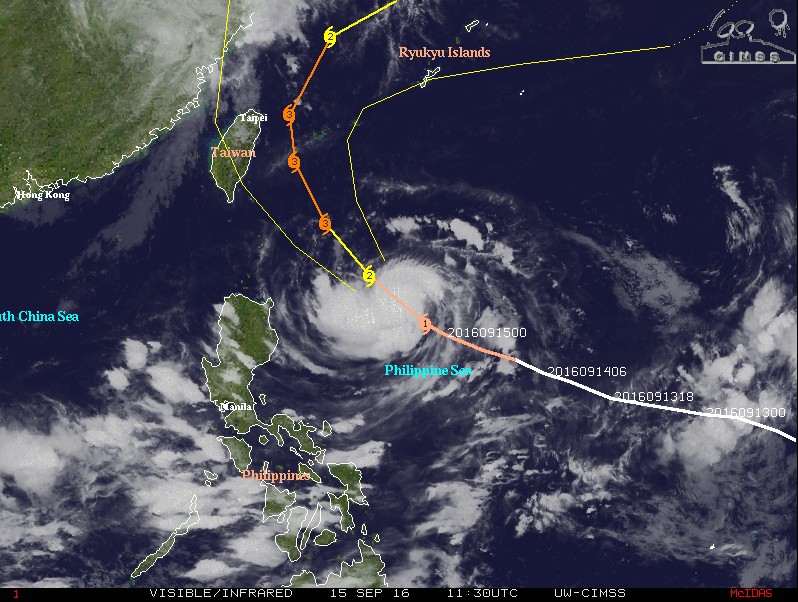 At 09:00 UTC, JTWC said Malakas will continue tracking to the northwest along the steering ridge under favorable conditions. The upper-level low is expected to persist and influence outflow on the eastern periphery, however, enhanced poleward flow is also expected to improve giving an opportunity for intensification over the next 36 hours reaching a peak intensity of 204 km/h (127 mph).

After 21:00 UTC on September 16, Malakas is expected to slow down as it rounds the ridge axis near northeastern Taiwan. Slight land interaction is expected during this time leading to a gradual weakening.

Malakas will then continue to track northeastward along the northern periphery of the subtropical ridge into the westerly jet. Vertical wind shear will increase significantly leading to rapid weakening of the system by 09:00 UTC on September 20.

At this time, confidence in the JTWC's Malakas forecast track is low.