Heavy rain has caused flooding of rivers and landslides. In the city of Kumamoto, a landslide buried a home with two people inside, The Asahi Shimbun reports. As of early June 21, one body has been found. In Kosa, an elderly man fell into a drainage ditch and drowned. Another was found in his home in Kamiamakusa, buried under a landslide. Two homes in Uto were also buried in landslides. One man was confirmed dead while a woman in her 50s living at another home also could not be reached.

Rivers across the region are in danger of flooding, prompting evacuation advisories for over 1 000 people.

"Rainfall was very variable across the region, but in Kumamoto itself, the impact seems to have been a short burst of extremely intense rainfall – 89 mm (3.50 inches) in a single hour. Sadly, this occurred late in the evening, when people are least likely to be able to see or even hear a landslide coming," AGU's Dave Petley said.

In Kosa, the maximum hourly precipitation was a staggering 123.5 mm (4.86 inches). "Again the most intense rainfall arrived in a short duration, very high intensity burst with devastating consequences," Petley said. 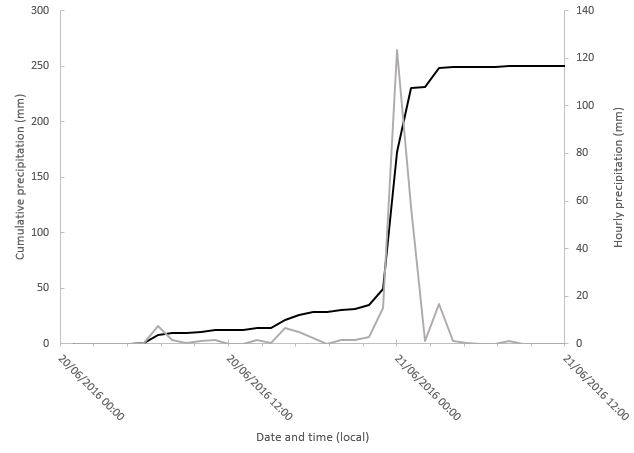 Precipitation data for the Kumamoto weather station. The gray line is hourly precipitation; the solid line is the cumulative rainfall since 00:00 on June 20, 2016.

Meteorologist Robert Speta of the NHK and WestPacWx said the rain in Kumamoto has stopped for the rest of the Tuesday, but southern Kyushu could still see an additional 150 mm (5.9 inches) with up to 120 mm (4.7 inches) in parts of Shikoku through central Honshu.

A gust up to 123 km/h (76.4 mph) was reported in Kochi Prefecture around 04:00 JST Tuesday morning. "Damaging winds are still possible through the rest of the day in stronger thunderstorms along the Pacific coastline. The worst of it will be towards Kanagawa and Chiba Prefectures along the coast. Storms are expected to kick back up in Kumamoto once again by Wednesday morning," Speta said.

The city is already fairly prone to landslides so the additional rainfall will put the area at even higher risk.

This region of Japan is still recovering from an M7.3 earthquake (April 15, 2016) and more than 1 000 aftershocks that followed, leaving numerous slopes in a fragile state.

"One of the most serious concerns about the Kumamoto earthquake was that the timing, shortly before the rainy season, meant that there was a high potential for post-seismic landslides. These have frequently proven to be problematic – in essence, the first exceptional rainfall after the earthquake tends to drive a spike in landslide activity, with potentially disastrous effects," Petley said. 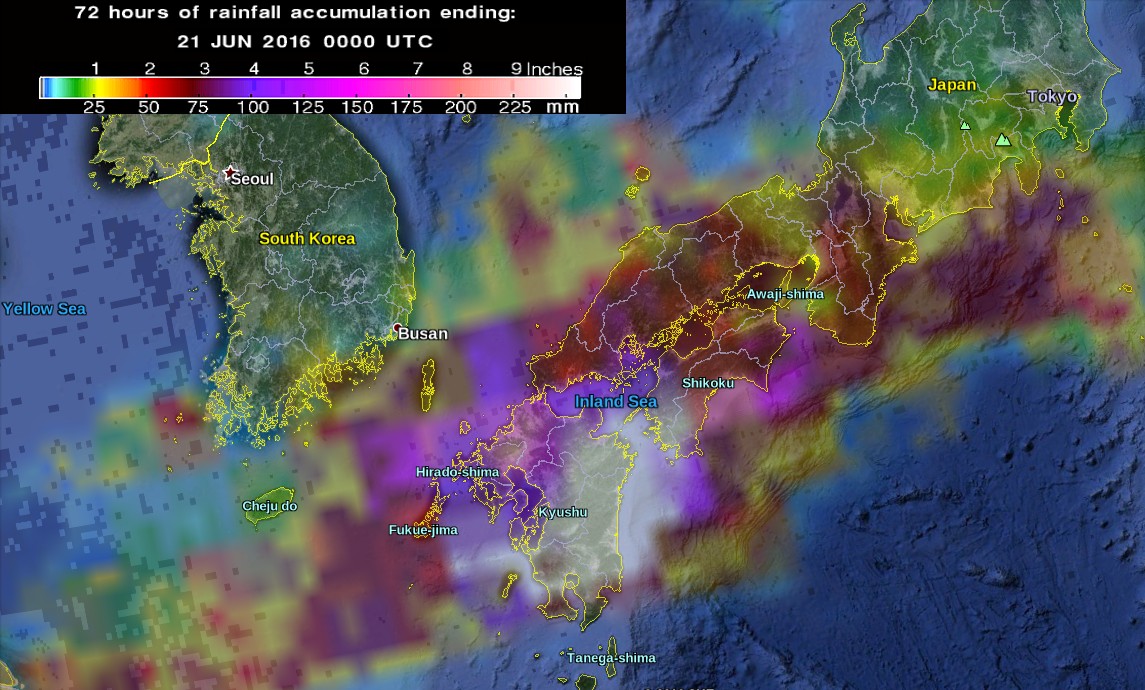 Featured image: A landslide damages part of a home in Uto, Kumamoto Prefecture, early on June 21. Photo by Jun Kaneko (via The Asahi Shimbun)