A rare transit of Mercury across the Sun will take place on May 9, 2016, starting at about 11:12 UTC and lasting about 7.5 hours. This is an extremely rare event that occurs only 13 or 14 times in each century. There will be one other transit of Mercury in 2019 and then the next one will not take place until 2039.

The 2016 transit of Mercury across the Sun will be visible throughout North America, Mexico, Central America, South America, and parts of Europe, Asia, and Africa. Viewers with telescopes and solar filters will be able to observe the dark disk of the planet Mercury moving across the face of the Sun. 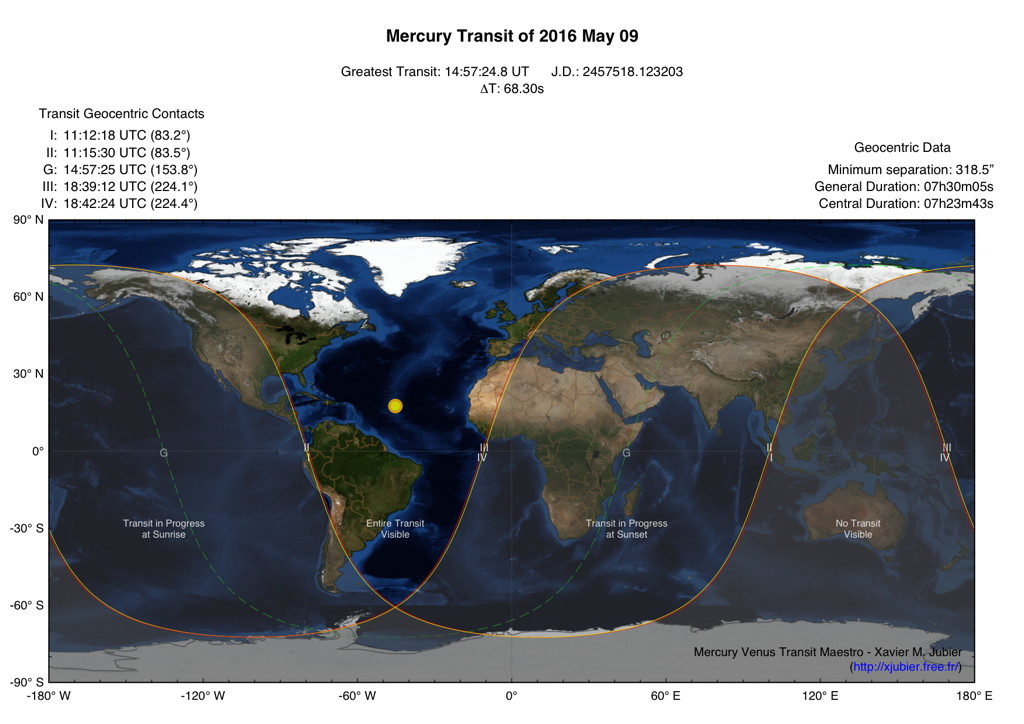 The Slooh Community Observatory will host a free, live webcast of the Mercury transit from 11:00 to 17:45 UTC. Slooh will be bringing together dozens of feed partners from countries across the globe, giving viewers a once in a lifetime look at the small planet’s journey. Slooh hosts and astronomers, together with guests and experts in planetary transits, history, literature, and art, will explore the significance of events like these, not only in academic pursuits, but in human experience.

NASA's SDO will be providing a near-live feed of the SDO images of the transit at http://mercurytransit.gsfc.nasa.gov.

Their images will be delayed a few minutes by the data delivery method, but the SDO website will display the data as self-updating movies. The movies will include a visible channel and most of the EUV wavelengths. You pick the box and wavelength and watch the transit unfold.

The image below shows Mercury’s position during the transit plotted on an AIA 193 image from April 9, 2016. The black circles are about the size of Mercury and are spaced 30 minutes apart. 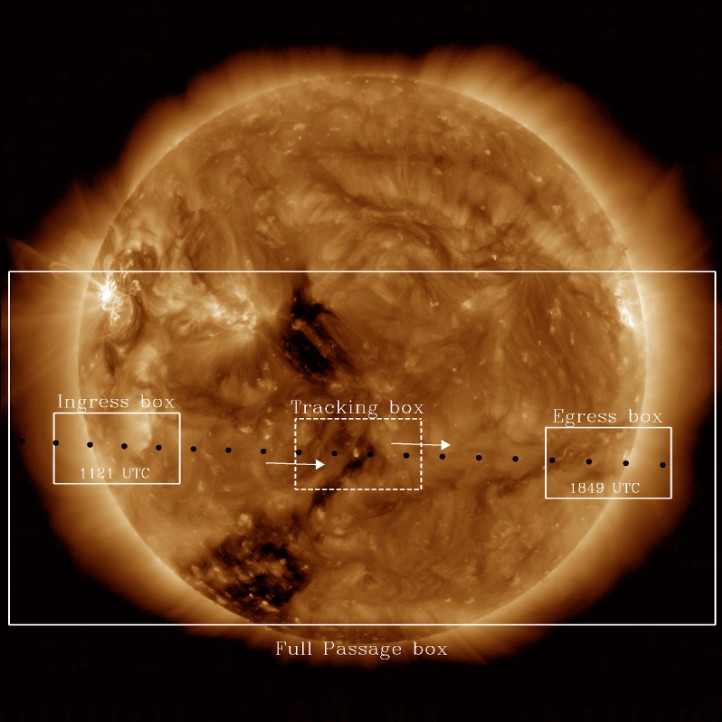 The Ingress box will show the images from when Mercury moves over the edge of the Sun at the beginning of the transit; The Tracking box will follow Mercury as it moves across the disk; The Egress box images will show the data when Mercury moves into that box as it exits the Sun. It will not be available until about 1730 UTC; The Full Passage box will be updated throughout the transit so that you can watch the entire path of Mercury across the Sun.

Along with the full-disk view of the Sun, SDO will provide several zoomed views. These views are shown by the boxes that are drawn on the image above. The EUV telescopes will see Mercury blocking the corona about an hour before it moves onto the disk. All of the boxes are built in a 16×9 ratio that nicely fits into an 1080p screen.

SDO images will be shown as short movies in your browser that update every few minutes to include the latest data from the satellite.

Planetary transits are far rarer than eclipses of the Sun by the Moon. There are 13 or 14 transits of Mercury each century. There will be one other transit of Mercury in 2019 and then the next one will not take place until 2039.