UK Met Office warns a low pressure system, named Storm "Imogen," will bring some very strong winds across the southern parts of Britain on Monday, February 8, as it moves eastward. Imogen follows Storm "Henry," which ran close to the north of Scotland through 1 February 1 into February 2. 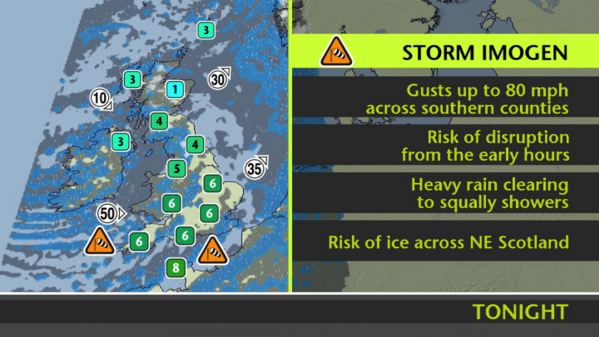 Met Office Chief Forecaster, Paul Gundersen, said: "Gusts of 96 – 112 km/h (60-70 mph) are expected in southern England and parts of south Wales, with 129 km/h (80 mph) gusts possible in exposed coastal districts. Some very large waves are also likely along some coasts especially along the north coasts of Cornwall and Devon".

Tuesday and Wednesday should be drier, quieter and colder days for many before more wind and rain follows later in the week

Imogen's strongest winds could affect the M4 and M5 motorways with wind gusts peaking from late morning into the afternoon. There is a risk of some disruption to infrastructure, road and rail.

This pressure sequence shows the arrival of #StormImogen with the strongest winds across southern areas.https://t.co/9QKFCoJdxk

"We are keeping a close eye on the situation as it develops and would encourage drivers, especially those driving high sided vehicles, motorcycles or considering a trip with a caravan, to consider driving conditions before setting off as they could be difficult," Gary Webb from Highways England said.

"If you do have to make a journey by road be prepared, plan your journey in advance and check the latest weather conditions along your route. Be aware of sudden gusts of wind, and give high-sided vehicles, caravans, and motorbikes plenty of space. In the event of persistent high winds we may need to close bridges to traffic for a period, so please be alert for warnings of closures and follow signed diversion routes," Webb added.

Strong winds could also have an impact at airports in the south-east, such as Heathrow.