A moderately strong explosive eruption was observed from the Showa crater of Sakurajima volcano, 50 km from the Sendai nuclear station in Japan on February 5, 2016. An ash plume rose to approximately 3 km (10 000 feet) altitude.

The explosive eruption occurred at 09:56 UTC, according to Japan Meteorological Agency. Large cinder nad pyroclastic flow from the explosion scattered in a 2 km (6 561.7 feet) radius from the crater. The alert level rose from 2 to 3, warning the residents not to approach the volcano.

Sakurajimaa volcano has been producing explosions of such intensity, at a rate of 3-5 per day, until the end of September 2015. The activity ceased around September 28, and the volcano has manifested only surface activity in the form of minor ash emissions, degassing and minor explosions until now, according to Volcano Discovery and GVP. 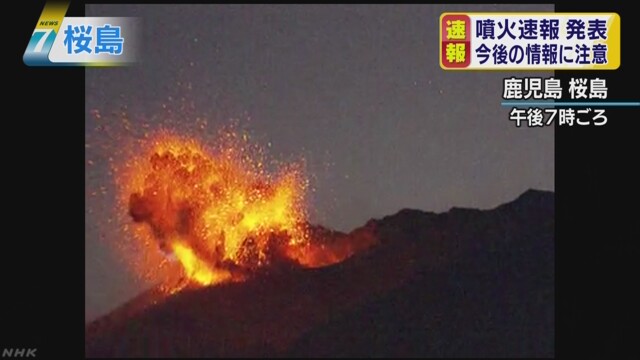 JMA warned there is a risk of cracking the window glass by a big blow due to the explosive eruption and to be alert of the debris flow at the time of rainfall.

In August 2015, residents were evacuated after the alert was raised to its second highest level. The Sakurajima eruption documented in 1914 was Japan's strongest eruption in 20th century. On the occasion the lava flows filled the strait separating the island from the mainland and turned the whole area into a peninsula.

The Aira caldera in the northern half of Kagoshima Bay contains the post-caldera Sakurajima volcano, one of Japan's most active. Eruption of the voluminous Ito pyroclastic flow accompanied formation of the 17 x 23 km caldera about 22,000 years ago. The smaller Wakamiko caldera was formed during the early Holocene in the NE corner of the Aira caldera, along with several post-caldera cones.

The construction of Sakurajima began about 13,000 years ago on the southern rim of Aira caldera and built an island that was finally joined to the Osumi Peninsula during the major explosive and effusive eruption of 1914. Activity at the Kitadake summit cone ended about 4850 years ago, after which eruptions took place at Minamidake. Frequent historical eruptions, recorded since the 8th century, have deposited ash on Kagoshima, one of Kyushu's largest cities, located across Kagoshima Bay only 8 km from the summit. The largest historical eruption took place during 1471-76.