A group of geoscientists onboard Investigator, the CSIRO's research ship, managed to capture a rare video footage of the Big Ben volcano eruption in the sub-Antarctic. Because of its extensive ice coverage, very little is so far known about its structure.

Heard Island is the top of an active stratovolcano on the Kerguelen Plateau in the southern Indian Ocean, located approximately 4 000 km (2 485.5 miles) SW of Western Australia. It's one of the two currently active volcanoes in Australia.

Its activity is fairly frequent, and eruption reports are dating all the way to 1881. Since 1980, remote sensing data has detected more and frequent activity at the volcano. Because of the inaccessibility of the remote Heard Island, satellites are the primary means of providing data and monitoring eruptions. 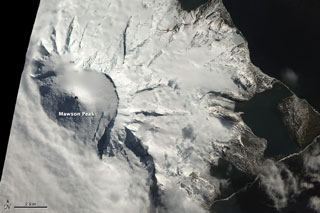 Although not definitive, this natural-color satellite image taken on October 13, 2012, suggests an ongoing eruption on Mawson Peak at the time. The dark summit crater is at least partially snow-free. There is also a faint hint of an even darker area, perhaps a lava flow, within. Shortwave infrared data shows hot surfaces within the crater, indicating the presence of lava in or just beneath the crater. Heavy cloud cover camouflaged what may have been a plume that erupted less than an hour after the image above was captured. Image credit: Robert Simmon, NASA Earth Observatory, using data from Advanced Land Imager (ALI) aboard the Earth Observing-1 (EO-1) satellite.

Matt Patrick (Hawaiian Volcano Observatory) reported information on the onset of thermal alerts measured by satellites for Heard Island in September 2012 after a 4-year hiatus, according to GVP. In the period between September 21, 2012, and October 6, 2013, MODIS/MODVOLC measured thermal alerts on a regular basis. The greatest number of days showing thermal alerts have been in December 2012 and March 2013. 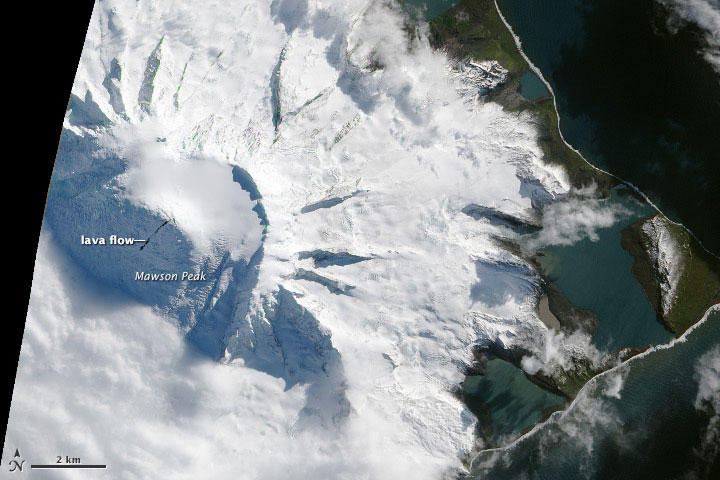 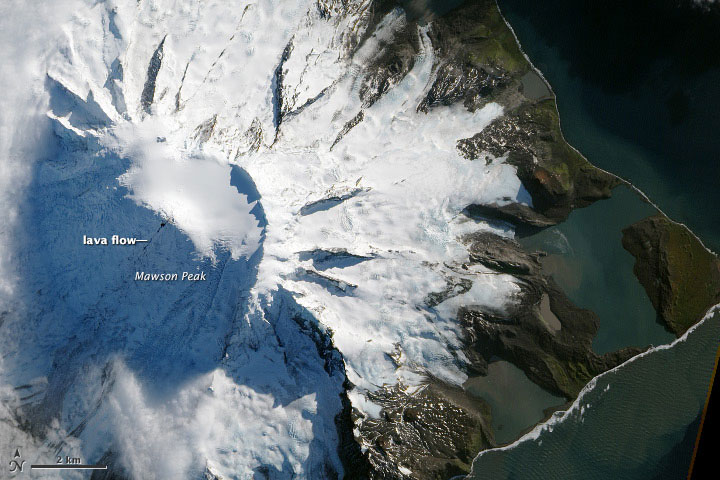 The newest eruption event has come as a surprise to the team, according to Professor Mike Coffin, the voyage's Chief Scientist from the Institute of Marine and Antarctic Studies: "Seeing vapour emanating from both of Australia's active volcanoes and witnessing an eruption of Mawson Peak have been an amazing coda to this week's submarine research."

A team of scientists, who have taken the footage, are investigating the connection between active volcanoes on the seafloor and the mobilisation of iron, responsible for supporting the life in the Southern Ocean. Their research will contribute toward understanding the Earth's climate system and change.

"To see lava emanating from Mawson Peak and flowing down the flank of Big Ben over a glacier has been incredible," said Jodi Fox, a Ph.D. student at the University of Tasmania.

Heard Island on the Kerguelen Plateau in the southern Indian Ocean consists primarily of the emergent portion of two volcanic structures. The large glacier-covered composite basaltic-to-trachytic cone of Big Ben comprises most of the island, and the smaller Mt. Dixon volcano lies at the NW tip of the island across a narrow isthmus. Little is known about the structure of Big Ben volcano because of its extensive ice cover.

The historically active Mawson Peak forms the island's 2 745-m (9 005.9 feet) high point and lies within a 5-6 km (3.1 and 3.7 miles) wide caldera breached to the SW side of Big Ben. Small satellitic scoria cones are mostly located on the northern coast. Several subglacial eruptions have been reported in historical time at this isolated volcano, but observations are infrequent and additional activity may have occurred. (GVP)