According to Xinhua, police received the report of the landslide at 11:40 (local time) which took place in the Liuxi Industrial Park in Guangming New District in the northwest part of the city. "More than 700 people are searching in debris for life. Rescuers have brought eight people to safety, one of them suffered minor injuries."

About 900 people have been evacuated, the local government said.

According to the Ministry of Public Security's firefighting bureau statement, 18 buildings were buried, and an area of 20 000 square meters (24 000 square yards) was covered with soil. 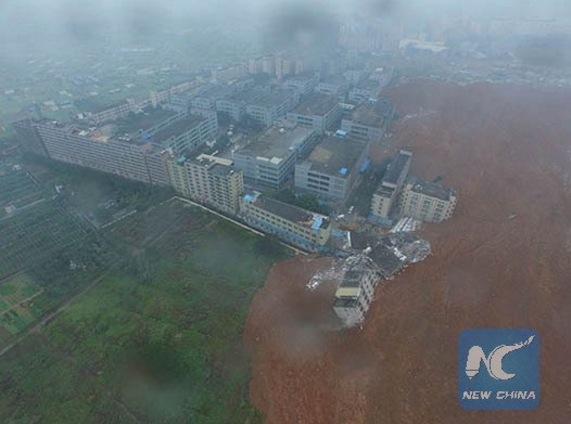 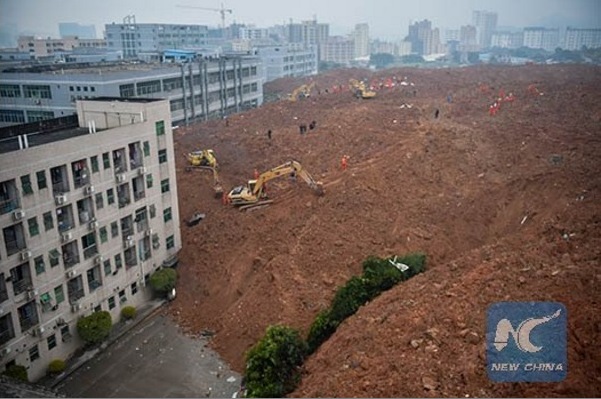 The soil that came loose had been dug up in the past two years in construction work and was piled up nearby, local media reported.

A statement on Weibo from the Shenzhen municipal government said the landslide had also triggered an explosion at a nearby gas station.

Media reports on December 21 mention 91 missing. The official number of missing stands at 85, as of late afternoon (local time) on December 21.

Authorities say the disaster was caused by the collapse of a huge mound of soil and construction waste.

The number of reported buildings destroyed rose from 22 to 33. They include 14 factories, two offices and three dormitories.

According to Xinhua, the landslide deposited more than 100 000 square meters (1.1 million square feet) of debris at the site. A sea of brown soil – with an average thickness of six meters (20 feet) – has covered an area of more than 60 000 square meters, geological experts told Xinhua.

The Ministry of Land and Resources said Sunday evening the mound of construction waste that collapsed had become too large and its angles too steep.

According to Quartz: "A local company called Lvwei Property Management built the dump area at the site of a stone quarry, and has managed it since 2013. It seems the company knew that landslides were a risk, judging by its January 2015 environmental assessment report. The report, cited by Beijing News, shows the site suffered from soil erosion, and that it was meant to be temporary, with a service term of 11 years. Both the entrance and exit of the dump area face the stricken industrial district, which includes housing for workers."

Premier Li Keqiang ordered an official investigation into the disaster.