Severe to extreme heat conditions have wrapped southern Australia as a hot air mass settled across the region since December 17, 2015. A number of fires have wreaked havoc across the affected areas and firefighters struggle to contain them. Extremely hot conditions were expected to reach their peak in most countries during December 19, Bureau of Meteorology (BOM) reported.

As the hot weather conditions developed, Adelaide has measured 40 °C (104 °F) for three days in a row this December, tying out with the record the country set in 2007. At least 40 °C (104 °F) was measured across Victoria on December 19 and three fires broke out, following the hot and dry conditions.

The area of Melbourne is expected to measure its record minimum of 30 °C (86 °F) on the night of December 19, and a total fire ban has been announced for December 20. Menindee and Wentworth in the southwest New South Wales have been forecast to reach temperatures of 43 °C (109.4 °F). 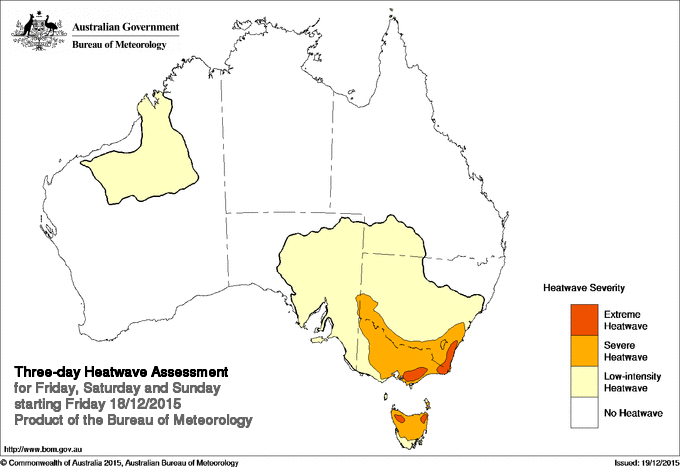 A grass fire was reported in Wonthaggi in the Gippsland region, where residents and firefighters joined their strength in saving the homes from the raging blazes, which started in the afternoon on December 19 (local time). Another grass fire at the foothills of Victoria's Dandenong Ranges has been contained during the day. In Wandin North the waterbombers have been employed to fight the fire raging just outside of one of the local houses.

32 fires were reported across New South Wales on December 19, six of them have remained uncontained.

Total fire bans have been put in effect in the Lower Central West Plains, Northern, Southern and Eastern Riverina, Slopes, Southern Ranges, the Illawarra/Shoalhaven and the Far South Coast.

Numerous heat-related health conditions such as cardiac arrest, heart problems and chest pains have been reported across the affected regions. A blaze of fire reported in the northern part of Melbourne has lead to one arrest, according to Victoria Police.

In addition to temperature forecast, a Heatwave Service, providing a measure of the heatwave's intensity in comparison with the long-term climate change has been put in service by BOM.

Major part of Tasmania has been placed on a total fire ban for the weekend, as temperatures have been expected to soar above 30 °C (86 °F). High and severe risk fire danger levels enhanced by dry conditions and strong winds have been put in place across the north and south area of the country.

Dangerous hot weather conditions are still expected in New South Wales where the temperature will still be on the rise during December 20, after which the relief is expected to set in across the state.

"We have a high-pressure system over the Tasman Sea which is directing generally hot north to northwesterly winds across New South Wales. The hot temperatures will be moving more over the ranges and towards the coast tomorrow so it will be a hotter day tomorrow compared to today," Olenka Duma, BOM's forecaster said.