The CME was observed at the ACE spacecraft at 15:28 UTC on December 19 and reached our planet at 16:17 UTC. According to WSA-ENLIL model, the second and somewhat brighter full halo CME from December 16 – a result of an eruptive event along a filament channel in the southeast quadrant of the Sun – has most likely combined with the C6.6 CME.

According to the SWPC, the greater than 2 MeV electron flux is likely to drop to normal to moderate levels on December 20 due to electron redistribution associated with the arrival of the December 16 CMEs. Moderate to high levels are expected on December 21 and 22 as CME impacts wane. The greater than 10 MeV proton flux is expected to continue at background levels.

The total field strength (Bt) ranged between 10-17 nT through most of the period. 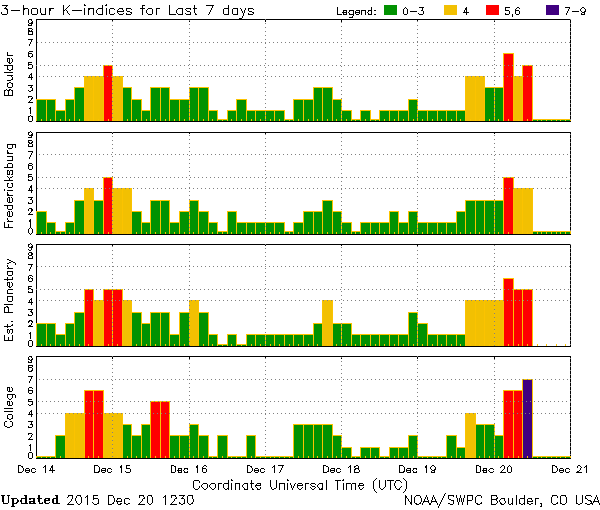 Solar wind speed reached near 520 km/s with shock passage and remained elevated until near 00:00 UTC on December 20 when speeds began to gradually decrease to about 395 km/s to end the period.

At shock passage, and through period's end, phi was variable between a negative and a positive (away from the Sun) orientation.

A gradual return to low conditions is expected on December 21 and 22 as CME effects wane.