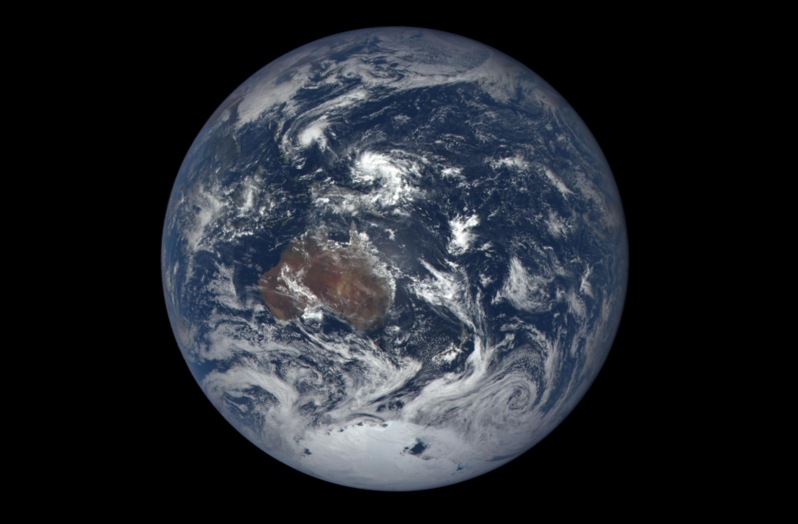 Less than a year after its launch on the Deep Space Climate Observatory (DSCOVR), NASA’s Earth Polychromatic Imaging Camera, also known as EPIC, is taking images of the entire sunlit side of Earth every two hours.

All images are in the public domain and can be viewed on EPIC's website.

With EPIC, you see cloud structure from sunrise on the left to sunset on the right,” said Jay Herman, EPIC instrument lead investigator at NASA’s Goddard Space Flight Center in Greenbelt, Maryland, and the University of Maryland, Baltimore County. “It’s the only view we have like this where everything is at the exact same instant in time, even though the local times are different.”

EPIC takes measurements in visible, ultraviolet and near-infrared wavelengths. With the ultraviolet channels, Herman can watch as dust from the Sahara travels westward across the Atlantic. While other low-Earth orbit satellite instruments can pick this up as they orbit at a fixed local time, EPIC provides a day-long view of the process.

“We can see the progression in real time, as it flows across the Atlantic,” Herman said.

Researchers also can determine the height and location of daytime clouds by comparing EPIC images at two different wavelengths. This measurement is important in calculating Earth’s energy balance for climate studies, as well as for tracking weather. For example, hurricanes show up as a high spiral of clouds surrounding a clearly visible eye.

“Because of the unique location and field of view, every day brings something new and unexpected,” said Alexander Marshak, DSCOVR deputy project scientist at Goddard.

One example Marshak points out is that, even a million miles away, EPIC can see the tracks of ships crossing the ocean. Some of the first images from EPIC show the clouds that result from the ships’ smoke plumes.

Researchers also are analyzing EPIC data to better understand vegetation, aerosols, ozone and other features of Earth and its atmosphere.

DSCOVR, positioned around 1.5 million km (~1 million miles) from our planet, was lauched on February 11, 2015. It reached its final destination on June 7 when it entered orbit around the 1st Lagrange point (L1), the neutral gravity point between the Earth and Sun.