The Colima volcano in Mexico exhibited signs of increased activity over the last two days. The volcano, also known as the Fire Volcano, erupted on November 16, 2015, followed by another eruption on the morning of November 17 (local time). Colima has been constantly active since the beginning of July, prompting evacuations on several occasions. 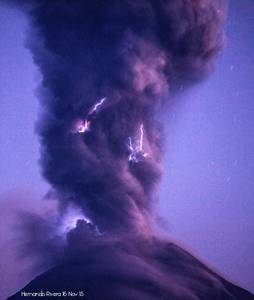 Based on satellite images, wind data and reports issued by the Colima Towers and the Mexico City MWO, in the period between November 4 to 7 and on November 9, ash plumes from Colima rose to altitudes ranging between 4.9 and 6 km (3 and 3.7 miles). The ashes spread about 13 to 24 km (8 to 15 miles) north, northwest, west, southwest and south. During November 10, emissions from the volcano were observed every 2 hours, rising up to 5.7 km (3.5 miles) and traveling southwest and west-southwestward.