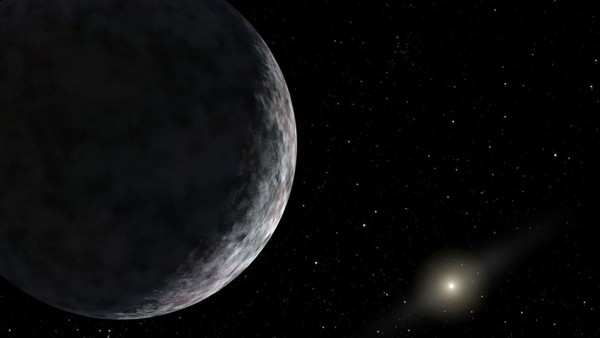 Astronomers have spotted a dwarf planet which is three times farther away than Pluto. This makes it the farthest object discovered in the Solar System. Once its orbit is ascertained, planetoid V774104 may teach researchers a lot about the early Solar System.

The researchers, led by Scott Sheppard, an astronomer at the Carnegie Institution for Science in Washington, D.C, used Japan’s 8-meter Subaru Telescope in Hawaii to detect the dwarf planet. This discovery was then announced at a meeting of the American Astronomical Society on November 10, 2015. Most searches involving distant objects tend to focus on the Solar System's plane. However, in this case, researchers focused on that region of the sky which was an average of 15° away from the ecliptic.

The discovered planetoid has been named V774104 and is between 500 and 1000 kilometers (310 to 621 miles) across. The dwarf planet lies 15.4 billion kilometers (9.56 billion miles) from the Sun, or 103 astronomical units (AU) away. One Astronomical Unit (AU) is the precise distance between the Earth and our sun. 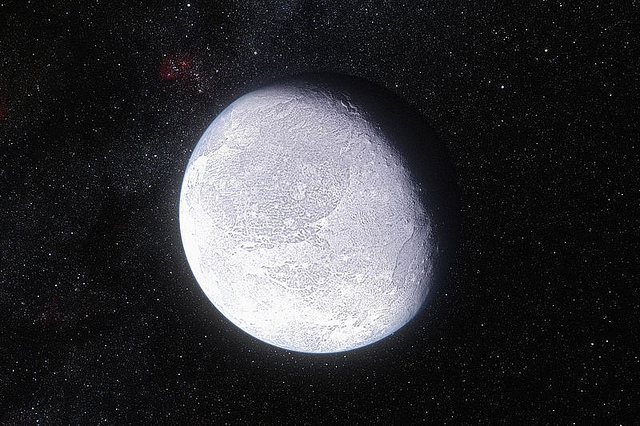 Artist's impression of the dwarf planet Eris which held the record for the most distant object in our solar system before this discovery. Image credit: Flickr/Nuno Gavina Couto

The researchers are still trying to pin down the orbit of V774104, which will require at least one full year of continuous observation. Once the orbit is determined accurately, V774104 could belong to one of two groups, according to researchers. If its orbit eventually takes it much closer to the Sun, then it could join the group of numerous icy planetary bodies whose orbit is greatly influenced by Neptune's gravity. However, if V774104's orbit never brings it within 50 AU of the Sun, then it would join a very rare group of two other planetoids, Sedna and 2012 VP113.

“We can’t explain these objects’ orbits from what we know about the solar system,” says Scott Sheppard, an astronomer at the Carnegie Institution for Science in Washington, D.C. Sheppard adds that both Sedna and 2012 VP113 never come within 50 AU of the Sun, and their orbits swing as far out as 1000 AU. Sheppard classifies this group as "inner Oort cloud objects". The Oort cloud is assumed to be a sparsely populated cloud-like sphere contained icy bodies, which is located thousands of AUs away from the Sun. The Oort cloud is presumed to mark the boundary of the Sun's gravitational influence.

The Subaru telescope located in Hawaii was used by the researchers to spot V774104. Image credit: National Astronomical Observatory of Japan

Scientists are fascinated with these rare inner Oort objects mainly because their irregular orbits cannot be explained by our current understanding of the Solar System. They hypothesize that an undiscovered giant planet may be influencing the orbits of inner Oort objects by its gravity. Another prominent theory states that gravitational forces, acting on the Solar System when the protosun was surrounded by other stellar nurseries, could have provided the necessary nudges.

Mike Brown, a planetary astronomer at the California Institute of Technology in Pasadena, discovered the dwarf planet Eris at a distance of 97 AU from the Sun in 2005. At the time, Eris was the farthest discovered object in the Solar System. Mike held that record for over a decade (2005-2015) right up to the current discovery. “I have held the record for 10 years,” he says, jokingly. “I have to relinquish it. So I’m sad.”

On V774104, Mike feels that it may help us understand the early structure of our Solar System. They carry the signature of whatever else happened,” he says. But until its orbit is accurately recorded, V774104 may or may not be interesting, Brown says. “There’s no way to know what it means.”