Another tropical storm formed in the Atlantic basin, on September 29, 2015, National Hurricane Center (NHC) reports. Tropical Storm "Joaquin" is currently located more than 600 km (373 miles) from the northwestern Bahamas, and is not expected to make landfall over the next two days. Although most forecast tracks predict Joaquin will turn away from the islands over the next few days, the storm's path is very difficult to predict at this point and chances are it might bring a certain amount of rainfall to the US East Coast, as of October 3.

Joaquin first formed as a Tropical Depression "Eleven" on September 28, and rapidly intensified into a tropical storm by September 29. 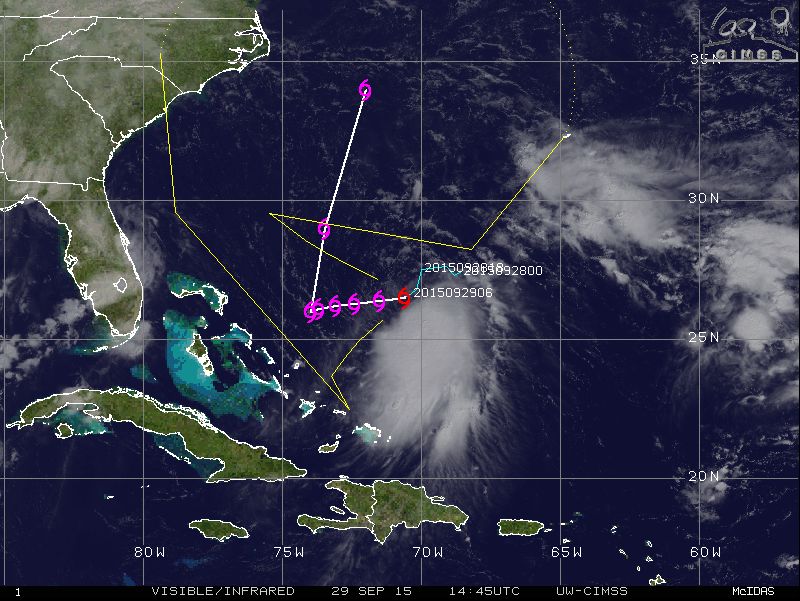 This system was located 680 km (425 miles) east-northeast of the northwestern Bahamas, on September 29 at 15:00 UTC, NHC reported. The storm was moving westward at 7 km/h (5 mph), packing maximum sustained winds of 75 km/h (45 mph) while its minimum central pressure was estimated at 1 001 hPa. Tropical storm winds extend outward in a 110 km (70 miles) radius from the center.

Slow strengthening forecast over the next 48hrs for Tropical Storm #Joaquin via @NHC_Atlantic http://t.co/N9h7KZNnfu pic.twitter.com/u1fgZT4yBq

Joaquin is expected to intensify over the next 48 hours and continue moving toward west at present forward speed. A building shortwave ridge in the northwestern Atlantic is expected to push the storm in the direction of the Bahamas, however present forecasts show a good likelihood the system will stop prior to reaching the islands and begin accelerating to either the north or northwest, according to NHC.

Parts of the US East Coast have been included in the system's forecast track for the weekend of October 3, possibly extending into early next week. Moisture from the tropical system might enhance the rainfall predicted across the Northeast coast later in the week.

The confidence in the forecast track remains quite low, so the system will require careful monitoring over the next few days. No tropical warnings or watches have been issued so far.