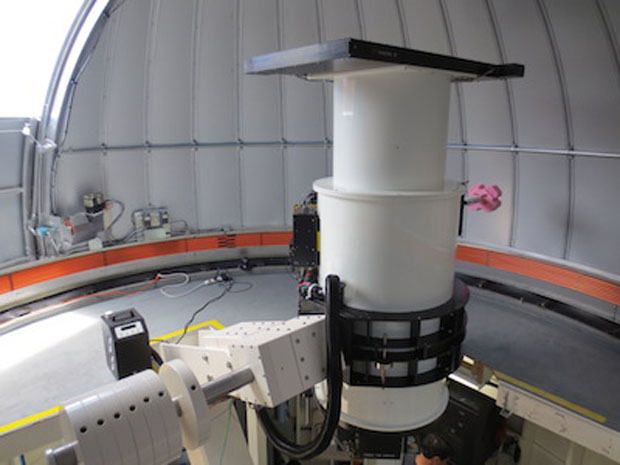 The first Asteroid Terrestrial-impact Last Alert System (ATLAS) telescope is now in operation on Haleakala volcano, on the Hawaiian island of Maui. The telescope is a part of an asteroid impact early system project that was developed by the University of Hawai'i and funded by NASA.

ATLAS consists of two telescopes placed at a distance of 62 km (100 miles) in order to scan the entire sky for a couple of times during the night to search for the moving objects. The telescope was designed to provide a one day's warning for a 30-kiloton asteroid, one week for a 5-megaton one and 3 weeks for a 100-megaton asteroid.

According to the ATLAS personnel, the telescope is fully operational: "We anticipate full resolution after some adjustments are made to the Schmidt corrector. The mount also performs well though it will require some fine-tuning to achieve ATLAS' stringent tracking specifications."

"All aspects of this whole system are very much under development right now. However, the existing system on Haleakala can survey the entire sky in a little more than one night, and we have begun accumulating images," ATLAS representatives said in their last update on July 30.

The second ATLAS telescope is planned to be situated on Mauna Loa, a volcano located on the main island of Hawai'i. Currently, the NASA team is discussing the option of placing the third ATLAS unit in South Africa.