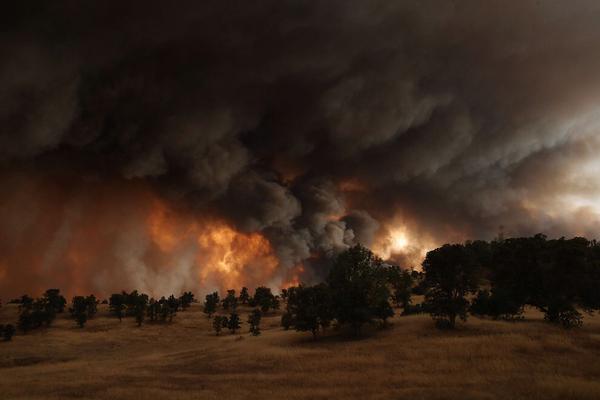 A 4 year drought period has provided an ideal platform for raging wildfires that have ignited the grounds of the state of California, as of July 29, 2015. As wildfires are spreading, further devastating the drought-stricken grounds, evacuations are being ordered across the affected areas, and an official state of emergency has been declared.

9 000 firefighters were employed in 24 large fires across California since this Saturday, August 1, according to the Cal Fire state agency.

'Rocky Fire', the largest Californian wildfire spread by 9 000 acres on Saturday, swelling from about 18 000 acres estimated on Friday, July 14, California Department of Forestry and Fire Protection reported. Extremely dry conditions are causing the fires to spread faster. Cal Fire reported 24 homes have been destroyed highways were closed, and over 6 100 structural objects remain threatened.

The 'Frog Fire' spread across 3 000 acres on Saturday. A US firefighter, D.R., 38, fell victim to the wildfire, while working on an emergency in the Modoc National Forest. The cause of death is still under investigation.

On Saturday, firefighters were finally successful in containing a large fire in Napa County. The 'Wragg Fire' which covered over 8 000 acres and was responsible for devastating one home and two other buildings in the area, is now 95% contained.

The Rocky Fire in CA is generating enough smoke to be seen from space. Details: http://t.co/Xpge99E7J5 #EarthRightNow pic.twitter.com/zyugQeagQQ

Governor Jerry Brown declared a state of emergency on Friday, July 31, and send out a plea for help in gathering additional resources for fighting the raging fires. The California National Guard has sent nine helicopters to help tame the flames.

It is believed that large number of lighting strikes since Thursday, July 30 was responsible for setting hundreds of small wildfires. Thunderstorms that battered the area, brought very little to no rain and only aggravated fire conditions. Red fire warnings remain raised, especially across the parts of northern California where the dry thunderstorm conditions were forecasted to continue throughout the weekend of August 1.