Under G1 conditions, weak power grid fluctuations can occur, minor impact on satellite operations is possible. Aurora may be visible at high latitudes.

Geomagnetic activity might reach G2-Moderate levels during July 11 and return to quiet conditions by July 13. 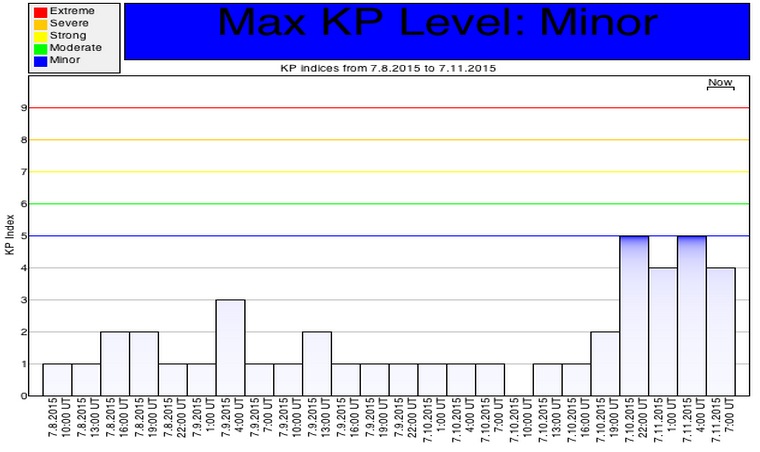 In their Forecast Discussion issued 00:30 UTC on July 11, SPWC said solar wind parameters at the ACE spacecraft were representative of ambient background conditions until around 15:00 UTC on July 10. Solar wind parameters then became disrupted due to the onset of a co-rotating interaction region (CIR) ahead of a positive polarity coronal hole high speed stream (CH HSS).

Total field values increased from near 5 nT to as high as near 12 nT.

Solar wind velocities remained steady with an average of about 340-350 km/s.

The Bz component varied between north and south orientations and had a maximum negative deflection of -6 nT.

The phi angle continued in a primarily negative (towards the Sun) sector.

At approximately 22:45 UTC, the IMF total field increased to 19 nT, Bz dropped to -14 nT, wind speeds increased to over 520 km/s, and the Phi angle switched to a positive (away from the Sun) orientation, all in response to an increase in activity from the CIR.

Around 22:38 UTC on July 10, the geomagnetic field activity increased to active conditions, followed quickly by an increase to minor (G1-Minor) storm conditions as the anticipated CIR impacted Earth.

Geomagnetic field activity is forecast to return to quiet conditions as the CH HSS continues to wane on July 13.