Eight months after a catastrophic failure of Orbital Cygnus mission to the International Space Station, in which supplies for the Meteor mission were lost, a new special camera was built and is now ready for lift off.

Currently scheduled to launch on June 28, 2015, the Meteor mission's primary objective is to record meteor showers from space and provide a new basis for studying the composition and behavior of meteors and their parent bodies. The mission will help scientists better understand the asteroids and comets crossing Earth's orbit and how these celestial objects have affected our planet. It could also help protect spacecraft and Earth from potential collisions with this celestial debris.

The Meteor investigation will spend two years recording meteor showers using a special camera installed in the station’s Window Observational Research Facility (WORF). This window was designed to support the use of high-resolution cameras and produce high-quality images from inside the station rather than outside, where instruments face the vacuum and extreme temperatures of space. 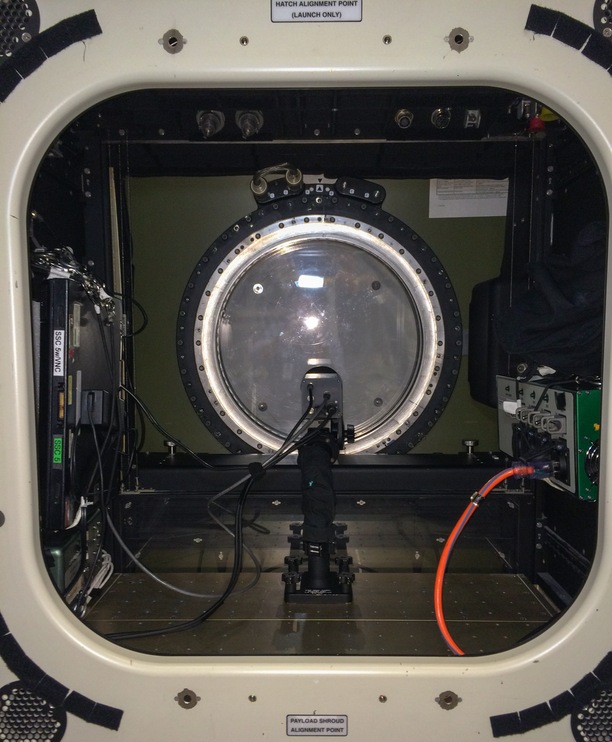 The Meteor investigation camera in the WORF window. Credit: NASA.

The camera, which should be installed before the end of July, is programmed to record predictable showers, and its continuous measurement of meteor interactions with Earth’s atmosphere could spot unpredicted ones as well.

Space-based viewing of meteor showers offers many advantages over traditional observation by ground- or aircraft-based instruments. Viewing from the station is not affected by weather or interference from Earth’s atmosphere. Instruments on Earth are also limited to short periods of observation time and viewing field, but the camera aboard the station is suppose to record for roughly 560 minutes every day. That is the amount of time the station is in darkness as it orbits Earth 16 times a day.

One thing is missing on the re-flight: a shutter actuation system that would allow operators on the ground to open and close the shutter that protects the WORF window. That means that now space station crew will have to open and close the protective cover, an activity that must be scheduled along with the many other tasks the crew perform.

“We might not get as much time to take images as we would have with the window actuator,” Michael Fortenberry, principal investigator for Meteor, explains. “It would be easier with the actuator, especially on the crew. But we will still get really good science.”

Meteor's camera is scheduled to launch aboard SpaceX Falcon 9 rocket at 14:21 UTC on June 28, 2015 from Space Launch Complex 40 at Cape Canaveral Air Force Station in Florida along other supplies for the ISS.

Roughly 139 seconds after launch, the rocket experienced an anomaly which resulted in the loss of the vehicle.

The astronauts are safe aboard the station and have sufficient supplies for the next several months, NASA said in a statement.

The next cargo launch to the space station is scheduled to launch on July 3, followed in August by a Japanese HTV flight. Orbital ATK, NASA's other commercial cargo partner, is moving ahead with plans for its next launch later this year.

At this time, we don't know what's going to happen with Meteor investigation, but we sure hope they build a third camera and deliver it to ISS very soon.