NOAA Fisheries’ Northwest Fisheries Science Center in Seattle has mobilized extra scientists to join a fisheries survey along the West Coast to chart an extensive harmful algal bloom (HAB) that spans much of the West Coast and has triggered numerous closures of important shellfish fisheries in Washington, Oregon and California.

HAB stretches from the Central California Coast north to Washington and possibly Alaska, and involves some of the highest concentrations of the natural toxin domoic acid ever observed in Monterey Bay and off the Central Oregon Coast, NOAA reports.

“We’re taking advantage of our active surveys to focus research on a serious concern for coastal communities and the seafood industry,” said Eileen Sobeck, assistant administrator for NOAA fisheries.

“The better we understand what’s happening out on the water, the better we can address the impacts.”

While localized blooms of marine algae that naturally produce domoic acid are common in spring, the bloom that began earlier this year has grown into the largest and most severe in more than a decade.

“This is unprecedented in terms of the extent and magnitude of this harmful algal bloom and the warm water conditions we’re seeing offshore,” said Vera Trainer, manager of the Marine Microbes and Toxins Program at the Northwest Fisheries Science Center (NWFSC) in Seattle.

“Whether they’re related we can’t really say yet, but this survey gives us the opportunity to put these pieces together.” 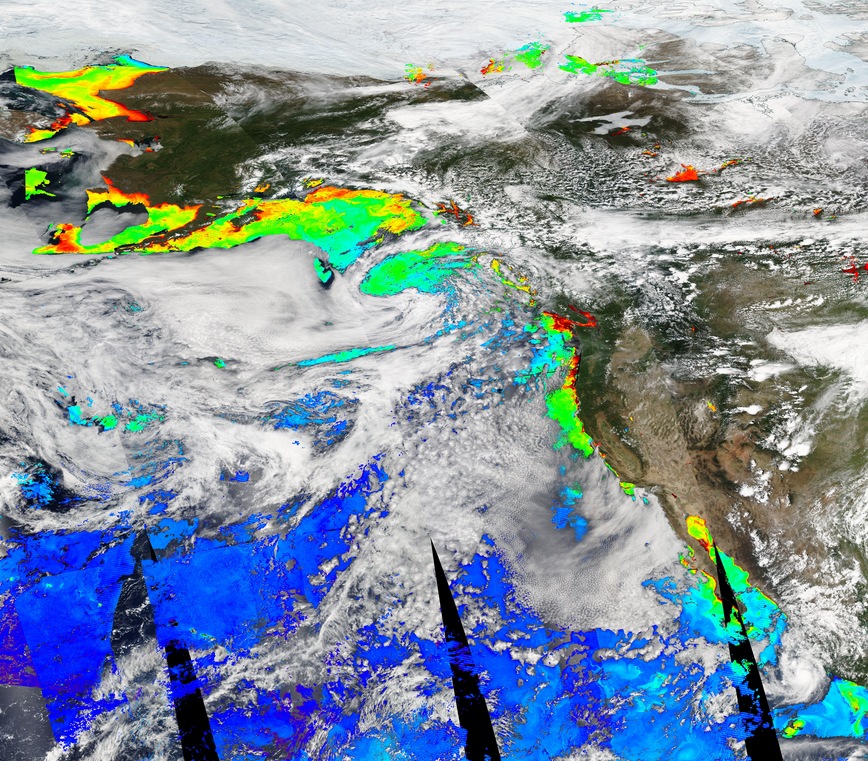 NOAA Fisheries and others are also developing advanced robotic systems and models to better detect and forecast harmful algal blooms. 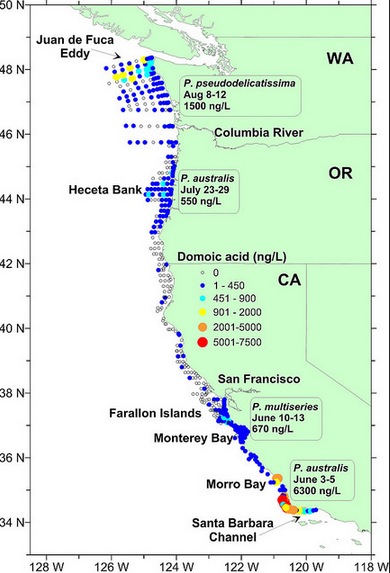 Concentrations of domoic acid at hot spots along the West Coast during 1998 harmful algal bloom. NOAA Fisheries is seeking to measure the hotspots again this year. Image credit: NOAA.

The Ecology and Oceanography of Harmful Algal Blooms (ECOHAB) Research Program is completing a study of one such hot spot in California’s Monterey Bay and provides funding for UC Santa Cruz to analyze samples that will be collected during the survey.

The results will help investigate connections between the current bloom and unusually warm ocean temperatures that have dominated the West Coast since last year, which may offer a preview of ocean conditions likely to become more common with climate changem NOAA says.

Officials in Oregon have halted all shellfish harvesting from the Columbia River south to Tillamook Head and closed the entire state coastline to razor clamming because of elevated levels of domoic acid. High levels of PSTs have led to the closure of mussel harvesting along the Oregon Coast north of Gold Beach. All coastal Washington beaches have also been closed to razor clamming, at an estimated loss of more than $9 million in revenue for coastal communities in the last month alone.