A new measurement and modelling tool/technique, developed by Dr Neel Savani of Imperial College London and NASA's Goddard Space Flight Center, could give more than 24 hours' notice of large magnetic storms from the Sun that could be harmful to systems on Earth.

Coronal Mass Ejections (CMEs) are eruptions of gas and magnetised material from the Sun that have the potential to wreak havoc on satellites and Earth-bound technologies, disrupting radio transmissions and causing transformer blowouts and blackouts.

These mass ejections can cause problems with GPS technology – used by all kinds of vehicles, from cars to oil tankers to tractors. For example, they can affect the ability of aircraft systems to judge precisely a plane's distance from the ground for landing, leading to planes being unable to land for up to an hour.

However, not every mass ejection from the Sun that travels past the Earth causes this much disturbance; the power depends on the orientation of magnetic fields within the mass ejection. Currently, satellites can only tell the orientation of a mass ejection's magnetic field with any certainty when it is relatively close to the Earth, giving just 30 – 60 minutes' notice. This is not enough time to mitigate the impacts on utility grids and systems operating on GPS.

"As we become more entwined with technology, disruption from large space weather events affects our daily lives more and more," said Dr Savani. "Breaking through that 24 hour barrier to prediction is crucial for dealing efficiently with any potential problems before they arise."

The orientations of magnetic fields within CMEs depend on two things: their initial form as they are erupted from the Sun, and their evolution as they travel towards Earth. Mass ejections originate from two points on the Sun's surface, forming a croissant-shaped cloud in between that discharges into space.

This cloud is full of twisted magnetic fields that shift as they travel. If one of these magnetic fields meets the Earth's magnetic field at a certain orientation, the two will connect, 'opening a door' that allows material to enter and cause a geomagnetic storm. 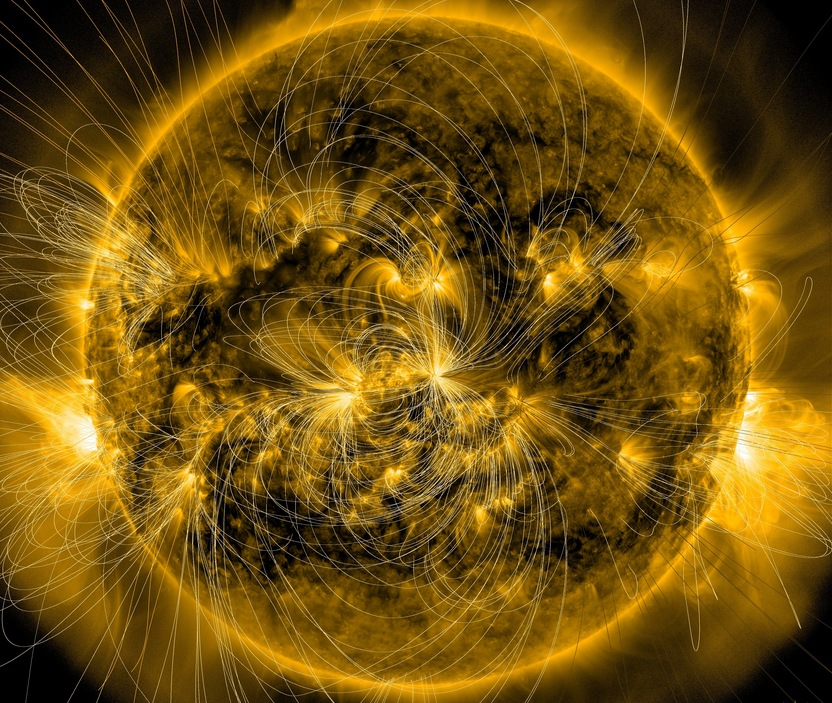 This image of the sun from January 7, 2014, combines a picture of the sun captured by NASA's Solar Dynamics Observatory, or SDO, with a model of the magnetic field lines using data that is also from SDO. A new model based on such data may one day help space weather forecasters better predict how eruptions from the sun will behave at Earth. Credit: NASA/SDO/LMSAL.

Previously, predictions had relied on measuring the initial CME eruption, but were not efficient modelling what happened between this and the cloud's arrival at Earth. The new technique takes a closer look at where mass ejections originate from on the Sun and makes use of a range of observatories to track and model the evolution of the cloud.

Dr Savani and colleagues have tested the model on eight previous mass ejections, with the results showing great promise at improving the current forecasting system for large Earth-directed Solar storms.

If further testing at NASA supports these initial results, the system could soon be used by NOAA in the US and the Met Office in the UK for geomagnetic storm predictions.

On January 7, 2014, the Sun’s surface erupted with an unusually large explosion. The US National Oceanic and Atmospheric Administration (NOAA) released a significant false alarm geomagnetic storm for Earth. In the movie, this initial structure seen as magnetic loops just south of centre on the solar disc reached out above the solar surface.

“We’ll test the model against a variety of historical events,” said Antti Pulkkinen, director of the Space Weather Research Center at NASA Goddard. “We’ll also see how well it works on any events we witness over the next year. In the end we’ll be able to provide concrete information about how reliable a prediction tool it is.”

Savani will also work to improve the user interface of his model. The goal is to create an easy-to-use application with standardized input and reliable output. Time will tell if Savani's model can help with characterization of CMEs, but if it works, scientists will have an advanced new tool to protect our home planet from the effects of space weather.