The ongoing heavy rainfall all over the southern Plains has caused severe, long-lasting, flooding. Cars and homes have been swamped and at least one person has been reported dead.

Late Monday night into Tuesday (May 18/19), 75.94 mm (2.99 inches) of rain fell in only 45 minutes in San Angelo Regional Airport, Texas causing the city's airport to shut down. The rainfall was more than the average rainfall for the entire month of May, their wettest month on average.

Accidents were reported on several highways around the city, and one driver had to be rescued from a car, according to THV11.com. This year's month of May is already the wettest May on record with 355.6 mm (14 inches) of rain recorded in Fort Smith by the NWS.

Some homes had to be evacuated in the Wichita, Kansas due to extensive flooding, while near Cole, Oklahoma, one person died when a car was swept away by the floodwaters.

We could do without the #flooding but the recent rain is certainly raising our lake levels! #LakeHefner #Oklahoma pic.twitter.com/9wpsSnk3ZA

What an improvement in vegetation from a dry May 2014 to a soaked May 2015. #TXwx #OKwx #drought #rain #flood pic.twitter.com/3mvfWIsf9N

According to the NWS Storm Prediction Center (SPC), over 30 tornadoes were reported from late May 19 through early morning May 20 in north Texas and southern Oklahoma. 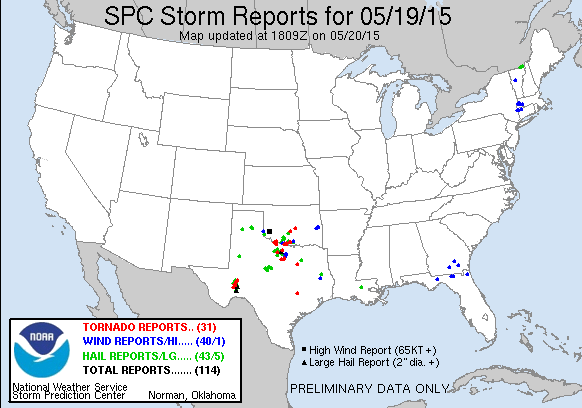 SPC is forecasting a risk of severe thunderstorms Wednesday afternoon (May 20) and evening from West Texas across the lower Mississippi Valley and into the western Tennessee Valley. The greatest risk will be across parts of southwestern and central Texas. Large hail and damaging winds will be the main threats.