In addition to snow cover, Arctic and Siberian air masses have settled in over the eastern US triggering many record low temperatures in many states last week.

On the morning of February 20, NOAA's Weather Prediction Center (WPC) noted, "There were widespread subzero overnight lows Thursday night (February 19) extending from Illinois to western Virginia, and numerous record lows were set. Bitterly-cold arctic air is setting numerous temperature records across the eastern US and will keep temperatures well below normal on Friday (February 20)."

In North Carolina, a record low temperature was set at Charlotte where the overnight temperature bottomed out at 7F breaking the old record of 13F in 1896.

In Asheville, temperatures dropped to just 4F breaking the old record of 10F in 1979. Temperature records for Asheville extend back to 1876.

In Louisville, Kentucky, temperatures dropped to -6F, breaking the old record low of 0F, according to meteorologist Brian Goode of WAVE-TV.

Meanwhile, Richmond Kentucky bottomed out at a frigid -32F.

Several records were also broken in Georgia, according to Matt Daniel, a meteorologist at WMAZ-TV, Macon Georgia, who cited data from the National Weather Service. Daniel said that Macon set a new record low when the temperature dropped to 18F, beating the previous record of 21F set in 1958. Athens broke a new record low too dropping to 14F and beating the old record of 18F set in 1958/1928. 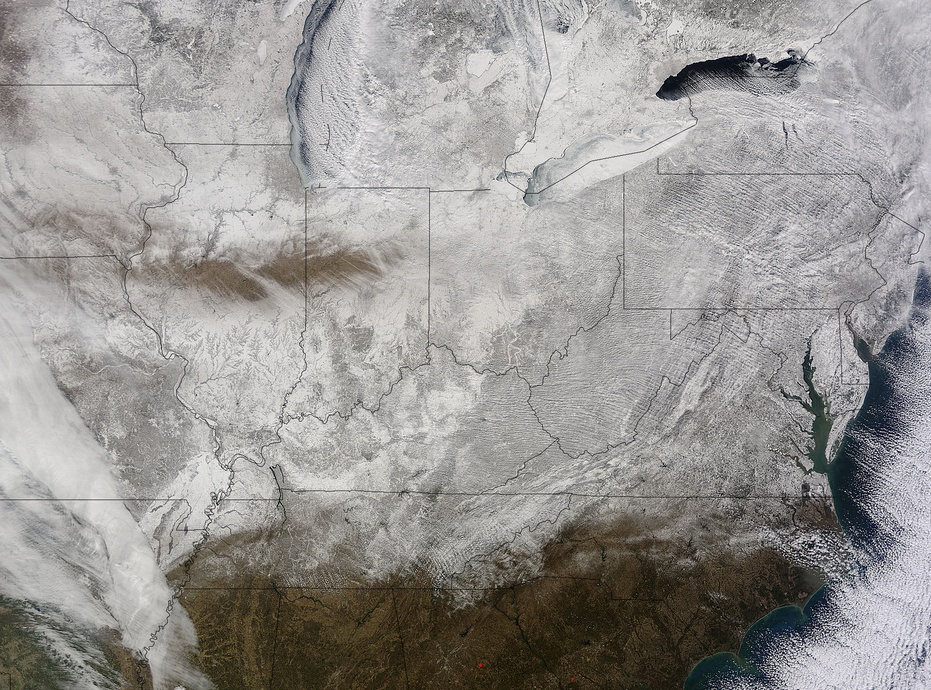 On February 19 at 16:40 UTC, the Moderate Resolution Imaging Spectroradiometer (MODIS) instrument that flies aboard NASA's Terra satellite captured a picture of the snowy landscape. The snow cover combined with the frosty air mass made the eastern U.S. feel like the inside of freezer. The MODIS image was created at NASA's Goddard Space Flight Center in Greenbelt, Maryland.

Lynchburg, Virginia, plummeted to 11 below zero Friday morning (February 20), setting a new all-time record low for any day of the year, The Weather Channel writes. The previous record was 10 below zero on January 21, 1985, and February 5, 1996.

At least 72 daily record lows were set Friday morning from Connecticut to Florida to as far west as Indiana, including major cities such as New York, Baltimore, Washington, Pittsburgh, Atlanta, Charlotte, Miami, Detroit and Cincinnati.