Kamchatka's highest and most active volcano, Klyuchevskoy, has reawakened after 12 months of relative calm period. Its last explosive-effusive eruptive episode started on August 15, 2013, and lasted until December 15, 2013.

According to data by KB GS RAS, new seismic activity started increasing from December 19 – 20, 2014: a number and a magnitude of shallow earthquakes increased; an intermittent volcanic tremor changed to constant; an amplitude of volcanic tremor increased up to 5.72 mcm/s to December 31, 2014.

The volcano was obscured by clouds on December 31, 2014, and January 1, 2015, but satellite data on the first day of 2015 showed a thermal anomaly over the volcano. KVERT increased the status level from green to yellow on and said a strombolian explosive eruption of Klyuchevskoy volcano probably began and continues. (VONA/KVERT Information Release, January 01, 2015. KVERT, Institute of Volcanology and Seismology FEB RAS)

Volkstat reported on January 4th activity at the volcano is growing. They observed frequent explosions at the crater which was now filled with fresh lava. The volcano exhibited rare and low emissions.

The weather improved on the night of January 4 and allowed visual observations of the top of the volcano. Judging by the photos, it is possible that lava flow started descending down the NW slope, they said. 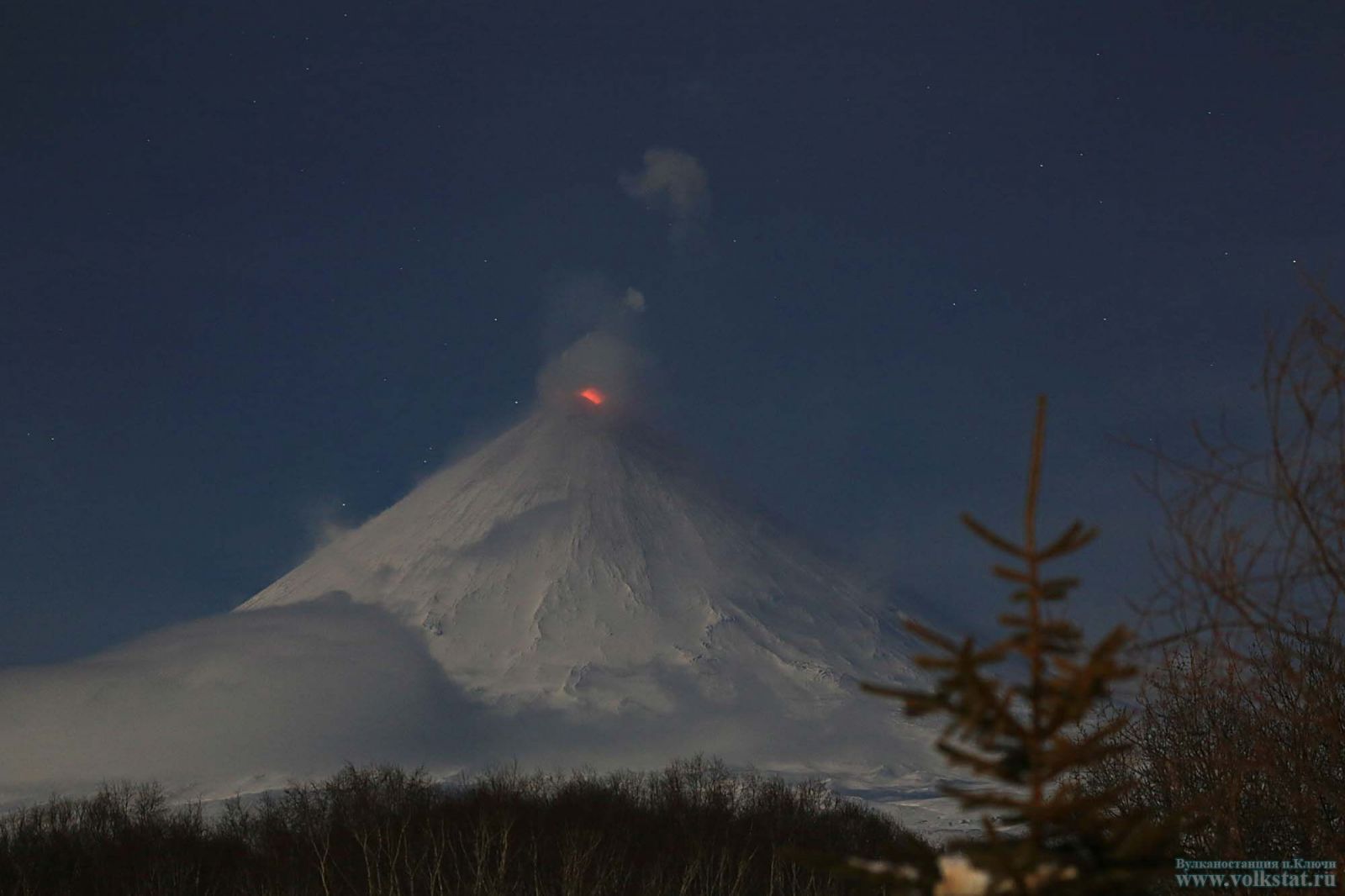 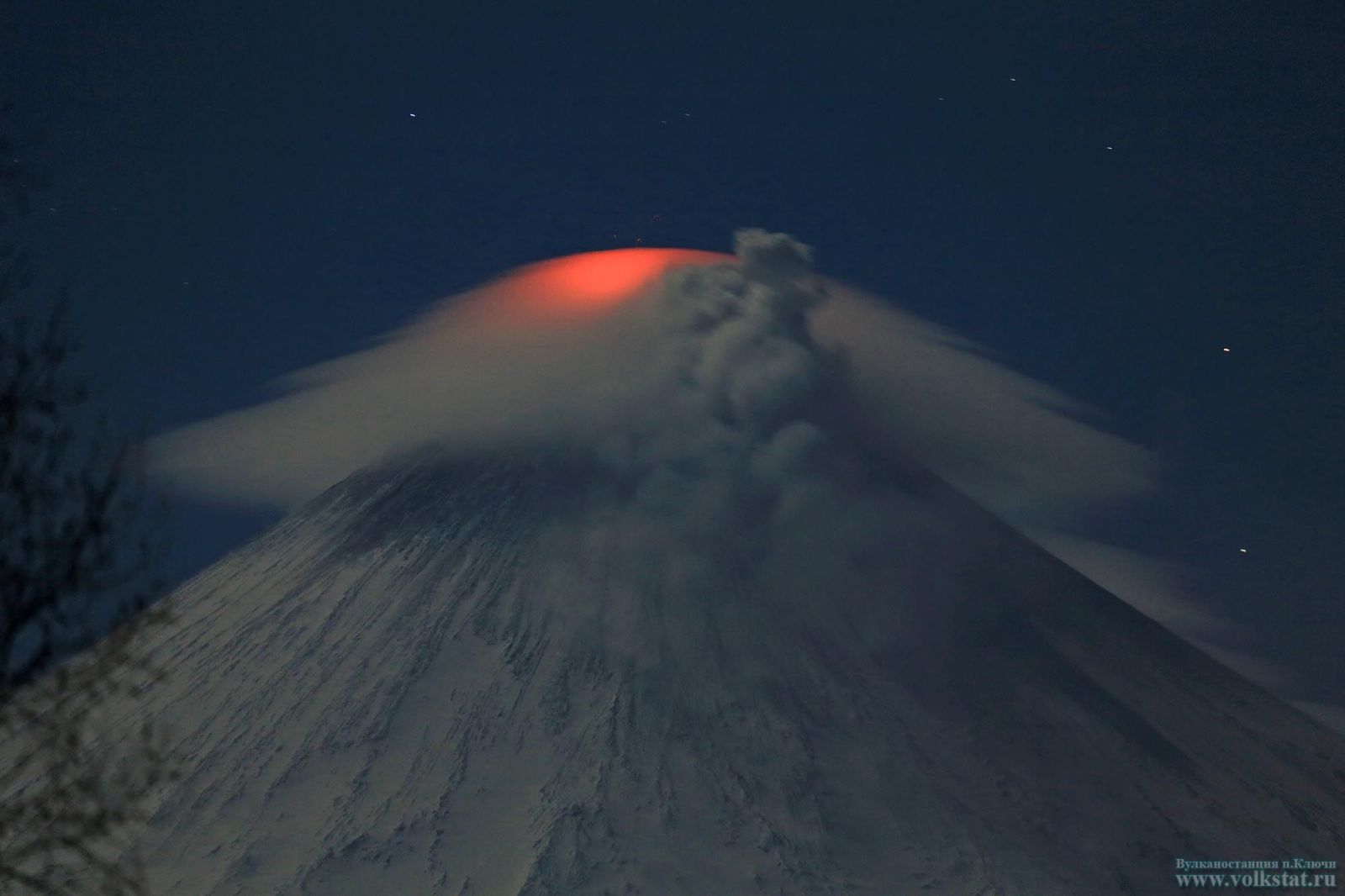 On January 6, Volkstat reported that from 04:00 local time activity at the volcano dramatically increased. Again, very low clouds prevented the visual assessment of the volcano.

The last time this volcano appeared in GVP's weekly volcanic report was during the week of January 1 – 7, 2014:

KVERT reported on January 2, 2014 that the explosive eruption at Klyuchevskoy had finished on December 20, 2013; the last strong explosion was detected on December 17, 2013. Video images showed gas-and-steam plumes continuing to rise from the volcano. Satellite images detected thermal anomalies over the summit and the lava flow on the SW flank; both areas were cooling. The Aviation Color Code was lowered to Green.

Klyuchevskoy (also spelled Kliuchevskoi) is Kamchatka's highest and most active volcano. Since its origin about 6000 years ago, the beautifully symmetrical, 4835-m-high basaltic stratovolcano has produced frequent moderate-volume explosive and effusive eruptions without major periods of inactivity. It rises above a saddle NE of sharp-peaked Kamen volcano and lies SE of the broad Ushkovsky massif.

More than 100 flank eruptions have occurred during the past roughly 3000 years, with most lateral craters and cones occurring along radial fissures between the unconfined NE-to-SE flanks of the conical volcano between 500 m and 3600 m elevation. The morphology of the 700-m-wide summit crater has been frequently modified by historical eruptions, which have been recorded since the late-17th century.