The Aviation Color Code has been increased to Orange and the Volcano Alert Level to Watch. A ground observer in Cold Bay located 60 km (37 miles) from the volcano has reported ash emissions up to 2 740 meters (9 000 ft) above sea level (about 213 meters (700 ft) above the summit). 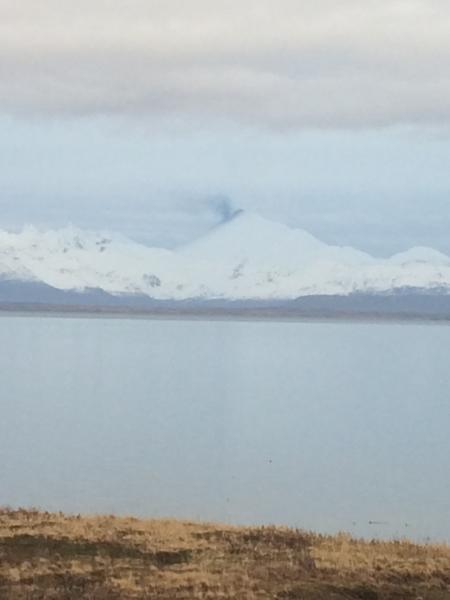 Minor ash emissions were visible in the FAA-operated web camera in Cold Bay beginning around 01:50 UTC on November 13, 2014 (4:50 pm AKST on November 12). Seismic tremor has increased over the past several hours and remains elevated. Satellite observation of the volcano are currently obscured by a low cloud deck.

On May 31, 2014, AVO said that elevated surface temperatures were detected over Pavlof in satellite images, suggesting a low-level eruption with lava. Observers camping near the volcano confirmed lava and noted that flows were originating from a vent on the NE flank. A low-level steam plume was visible in satellite images and recorded by the FAA web-cam located in Cold Bay. Several pilots observed a gas-and-ash plume drifting N at altitudes of 2.1 – 2.4 km (7,000-8,000 ft) a.s.l.

This phase of activity escalated on June 2, 2014, prompting AVO to raise the Aviation Color Code to Red and the Volcano Alert Level to Warning. Seismic tremor increased at 15:00 and pilots observed ash plumes at altitudes of 6.7 km (22,000 ft) a.s.l. Satellite images showed a plume drifting more than 80 km E. Seismicity started to decrease at 23:00. The web cam recorded intense lava fountaining at the summit and incandescence from a spatter-fed lava flow on the N flank. 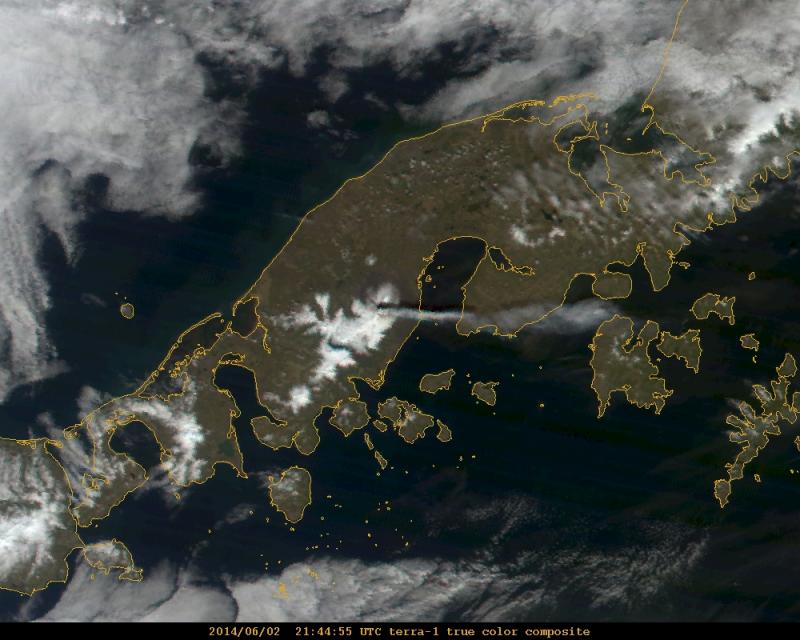 MODIS satellite image, showing Pavlof eruption plume stretching to the east. The portion of the plume visible in this image is about 50 miles long. Image taken at 21:44 UTC on June 2, 2014. Image credit: USGS/AVO/NASA/Terra/MODIS

On June 3, 2014, seismicity again increased and pilots observed ash-and-steam plumes at altitudes of 7.3 km (24,000 ft) a.s.l. that drifted SSW. Later that day AVO lowered the Aviation Color Code to Orange and the Volcano Alert Level to Watch due to a decrease and stabilization of volcanic tremor. Satellite and webcam images showed two distinct parts of the plume: gas and steam with minor amounts of ash rose high above the volcano and drifted S, while pyroclastic flows on the N flank produced diffuse ash that caused hazy air and variable concentrations of ash below 3 km (10,000 ft) a.s.l. Winds were likely to push ash at lower altitudes WSW.

The last time this volcano appeared in GVP's weekly volcanic report was during the week of June 18 – 26, 2014. The report was an update on eruptive phase that started on May 31, 2014: "AVO reported that seismicity at Pavlof continued steadily with intermittent seismic events during June 18 – 23, the Aviation Color Code remained at Orange and the Volcano Alert Level remained at Watch". 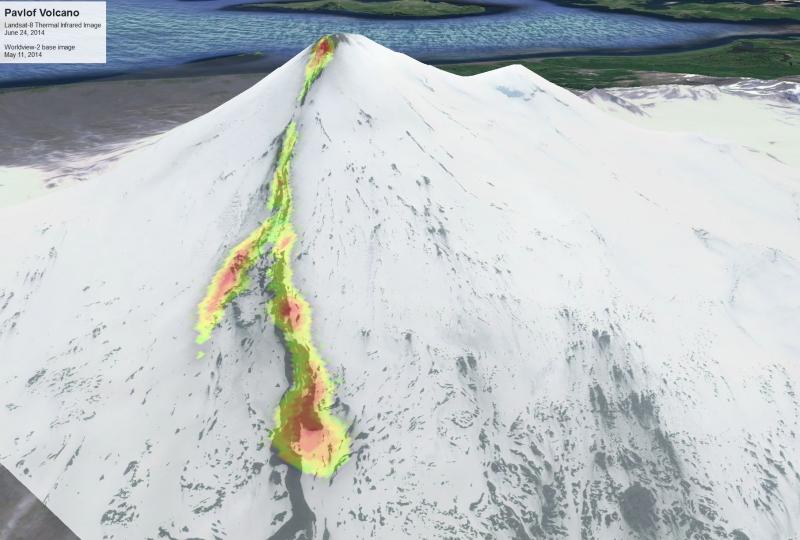 Composite satellite image of Pavlof Volcano showing the extent of the lava flows on the northeast flank. The base image was collected by the Worldview-2 satellite on May 9, 2014 (prior to the onset of eruptive activity) and is overlain (in color) with a Landsat-8 thermal infrared image collected early in the morning on June 24, 2014. The thermal infrared sensor measured the heat given off by the still-warm lava flow. The length of the longest branch of the lava flow is about 5 km (3 miles). Note that the lava flow appears to have traveled under the ice on the upper flank of the volcano. Image courtesy: USGS/AVO/Dave Schneider

Previous notable eruption phase started on May 13, 2013, and lasted until August 8, 2013. Several ash plumes during this phase disrupted aviation, including an 8-km high plume on June 24, 2013. As in past Pavlof eruptions, the recent eruptions fluctuated in intensity, GVP said.

Before this, it had most recently erupted on August 15, 2007, following an 11-year period of quiescence.

According to Mangan and others (2009), Pavlof has discharged more than 40 recorded eruptions within the previous 200 years, producing mostly basaltic andesite to andesite products. (GVP)