Solar activity reached high levels in last two days and with newly numbered Active Region 2205 ('beta') now fully visible on the disk it is expected to remain elevated. This active region showed high flaring activity and Coronal Mass Ejections (CME) while rotating in and if it continues to do so Earth directed CMEs will be possible in the days ahead.

A strong solar flare reaching M7.9 (R2 – Moderate) was observed from it starting 09:26 UTC today. The event peaked at 09:47 and ended at 09:55 UTC. A 10cm Radio Burst lasting 6 minutes with peak flux of 229 sfu was associated with the event indicating a significant radio noise. This noise is generally short-lived but can cause interference for sensitive receivers including radar, GPS, and satellite communications.

Additionally, A Type II Radio emission with estimated velocity of 816 km/s was observed. Type II emissions occur in association with eruptions on the Sun and typically indicate a CME is associated with a flare event. 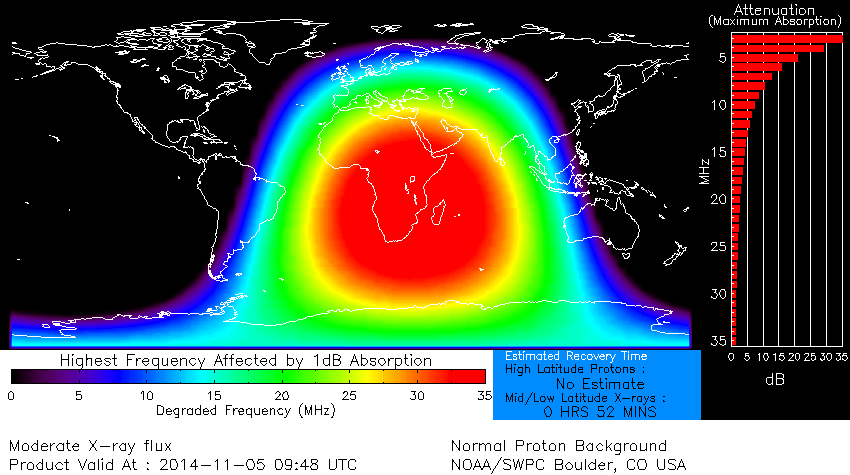 This region has already erupted with several moderately strong eruptions associated with non-Earth directed Coronal Mass Ejections (CMEs) while rotating into view. At 11:03 UTC on November 3, an M2.2 solar flare was observed from its position and was followed by M6.5 at 22:40 UTC. The M6.5 event was associated with a 10cm Radio Burst lasting 9 minutes (180 sfu) and a Type II Radio Emission signature. CME was directed away from Earth.

Further M-class (R1-R2, Minor-Moderate) flare activity is likely from this region as it continues to rotate into view. 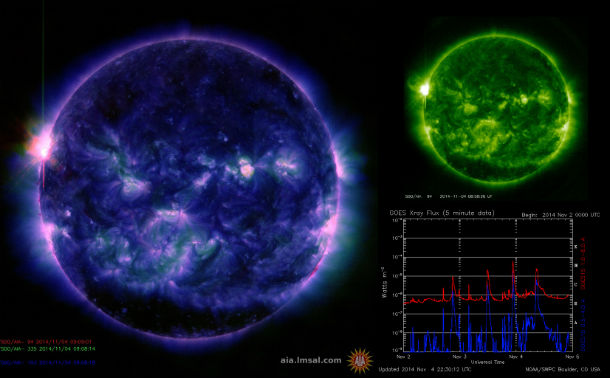 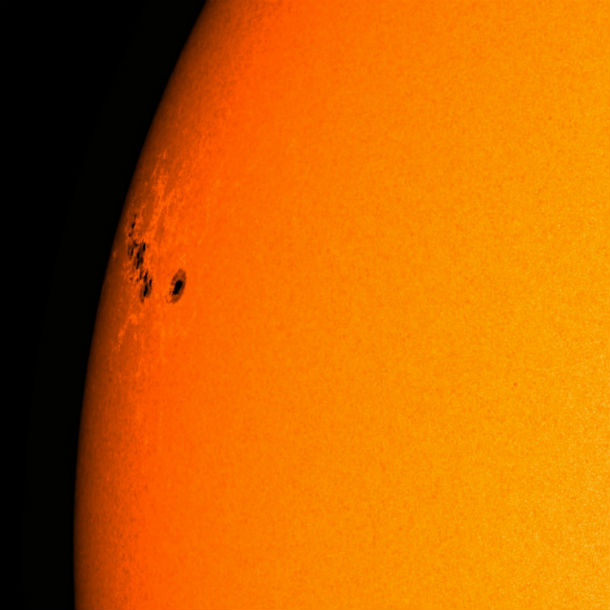 There are currently 7 numbered sunspot regions on the visible disk. Most regions appear to be fairly stable. Numerous filament eruptions and CMEs were detected during the past 36 hours, but all appear to be directed away from Earth. 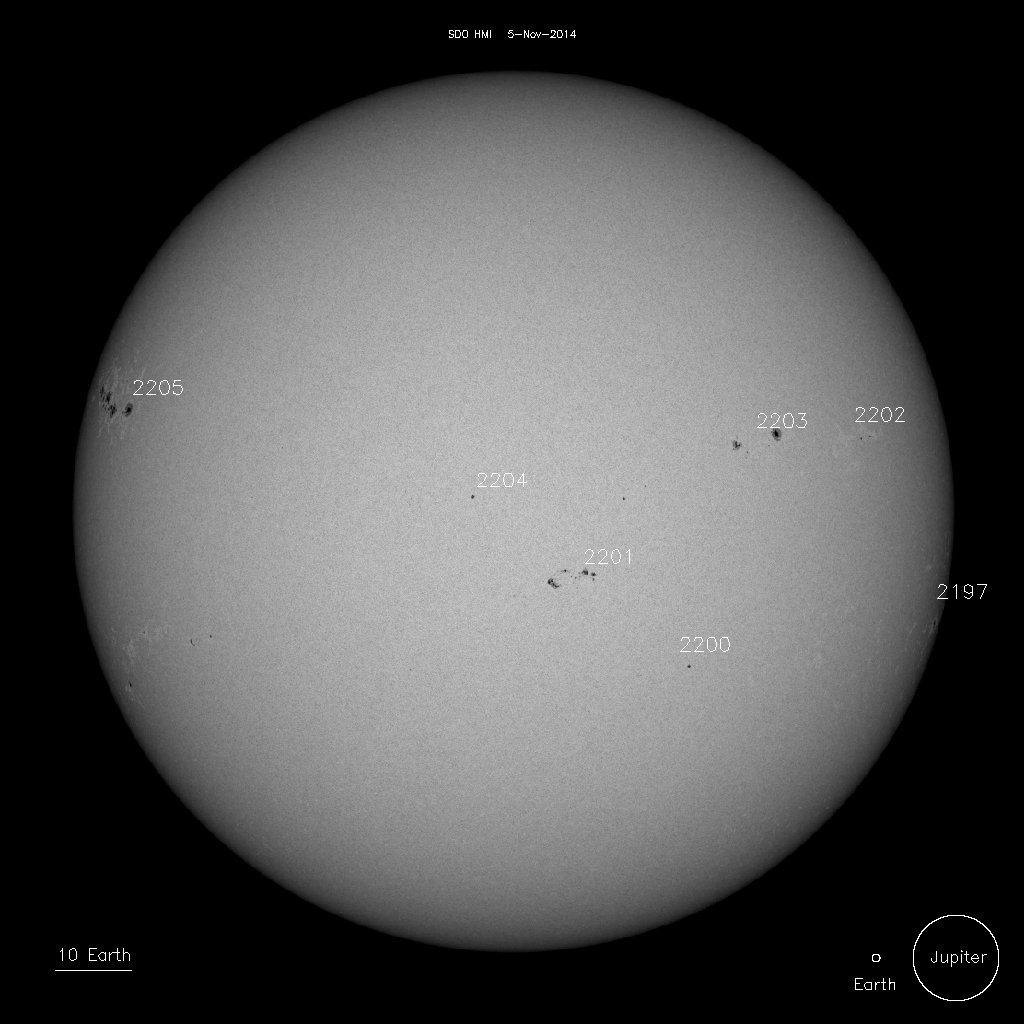 The geomagnetic field was quiet to active yesterday with periods of minor to major storm levels at high latitudes, possibly in response to the passage of a transient feature and prolonged periods of southward interplanetary magnetic field. It is expected to remain like until November 7. Proton levels continued to decrease yesterday.

"The SDO JSOC is recovering from an internal disruption and images are unavailable. This outage should last 24 hours."

Their update at 21:42 UTC said: " We have learned that the fiber cables between WSMR and Stanford were accidently cut. This outage will continue until the location has been determined and the lines repaired or bypassed. The problem at the JSOC has been fixed and, until this new outage, the image cadence was being restored.

Region 2205 continues to rotate onto the visible disk, revealing a large complex region with a possible beta-gamma-delta magnetic configuration.

The first M-class solar flare from this region today erupted at 01:39 UTC as M3.2. The event started at 01:29 and ended at 01:54 UTC. CME was generated but it looks like it does not have an Earth-directed component.

An M5.4 solar flare, accompanied by a Type II (732 km/s) and IV radio emissions, erupted at 03:46 UTC. The event lasted 30 minutes; it started at 03:32 and ended at 04:02 UTC. Type IV emissions occur in association with major eruptions on the Sun and are typically associated with strong CMEs and solar radiation storms. 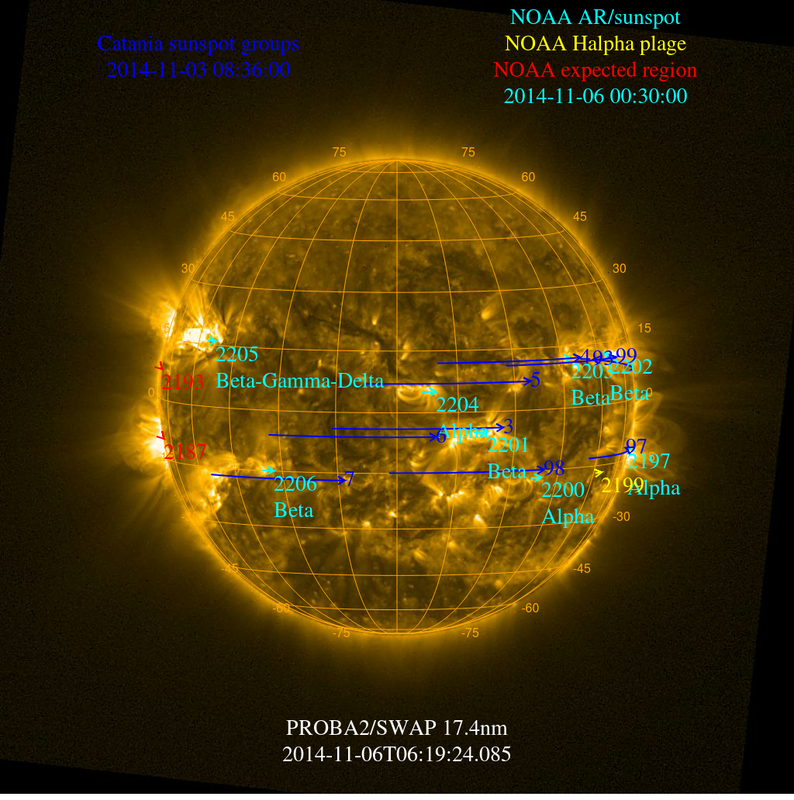 This page will be updated with latest data and analysis.